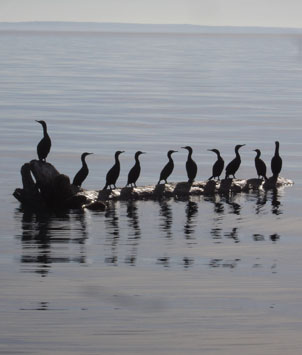 Cormorants in the Strait of Juan de Fuca

While sailing around the world solo, non-stop, unaided - around the Five Great Capes of the Southern Ocean, including Cape Horn - which is quite a challenge, I was raising money for the RNLI Lifeboats organisation (Royal National Lifeboats Institution) - a UK-based charity which saves many lives at sea and around the coast each year due to its dedicated and well-trained volunteers.  With no government funding, they are totally dependent on public donations.

If you click on the Lifeboats logo, you can donate via the secure 'JustGiving' website - many thanks for your sponsorship of my efforts!

​Amateur radio has been of great value to me while sailing around the world single-handed.  It has enabled me to keep in contact with people on shore all over the world and many have become good friends.  It also means I don’t suffer from feelings of isolation when at sea on long passages and can get useful advice if I’m having a problem when trying to repair an item on board that has, inevitably, broken down while underway.   Having SSB//HF radio on board also meant I was able to chat on maritime frequencies to cruisers in the Pacific (French Polynesia, Fiji and Tonga) on my way north as I headed to my finish - radio is a great free resource for all sailors, and cruisers especially, to keep in touch and exchange useful information.

Jim, WB2REM, kindly set up this page soon after I started on my last circumnavigation and, by keeping in daily touch a lot of the way around, kept track of  my route and posted my progress daily on Google Earth, along with copies of radio interviews and everyday ‘ham’ contacts, on this VE 0JS page on QRZ.com

The Pointons sailed around Britain in 'Tikka' from June to August 2016 in aid of Action for Children whose aim is to make life better for the UK's most vulnerable children and young people.​

​They then sailed around again in 2019 - this time clockwise, visiting many different places, and again raising much-needed funds for Action for Children

Beaufort Wind Force Scale  I often reference the wind speed by giving the Beaufort force number. Wikipedia provides a table describing the different sea conditions associated with a given range of wind speeds and useful pictures of the sea states.

- provides a full-featured radio digital message transfer system worldwide. Email transfer with attachments, position reporting and graphic or text-based weather bulletins are available to the Amateur radio community by linking HF/SSB radio to the Internet, usually by the use of a Pactor modem (manufactured by SCS)​ between my onboard radio and computer, and is of vital importance in Emergency communications, when the Internet might be unavailable.  (See  www.winlink.org ) which has recently undergone a major update and is full of useful information.)   Winlink 2000 is available to any properly-licensed Amateur radio operator.  I use the client software Airmail developed by Jim Corenman.

Maritime Mobile Service Net (MMSN)  - provides a service to all 'ham' seafarers and an emergency service to any seafarer in distress on 14.300 MHz from 1600UTC- 0200UTC daily but many 'hams' keep the frequency 'open' at other times, in case of distress.

WL2K and MMSN position and weather reports are shared with international marine forecasters who use them as a check on predictions and so help to improve their accuracy.

Reports are distributed to Search and Rescue co-ordinators so that in an emergency they not only have a better picture of speeds, courses and conditions experienced by boats in difficulties, but can also locate others in the area that may be able to offer assistance.

Reports contribute to a growing data base of offshore weather observations. These are used to provide the most up to date monthly analysis of conditions experienced on the more popular cruising routes.

Pacific Seafarer's Net - meets daily on 14.300 MHz at 0300 UTC to receive position and weather reports from cruisers who also hold an amateur radio licence.  It is part of the Maritime Mobile Service Net, based in North America.  (See www.PacSeaNet.com)

The Singlehanded Sailing Society provides a forum where sailors and others interested in the sport of singlehanded sailing can share their ideas and experiences. Races provide an organized arena in which ideas, equipment, designs, and vessels specifically created, built, modified or equipped for long-distance singlehanded racing may be tested and evaluated through friendly sportsmanlike competition. The development of personal skill in singlehanded sailing is encouraged through sailing events and seminars.   It organises the two-yearly Single-Handed TransPac Race from San Francisco to Kauai ('even' years)