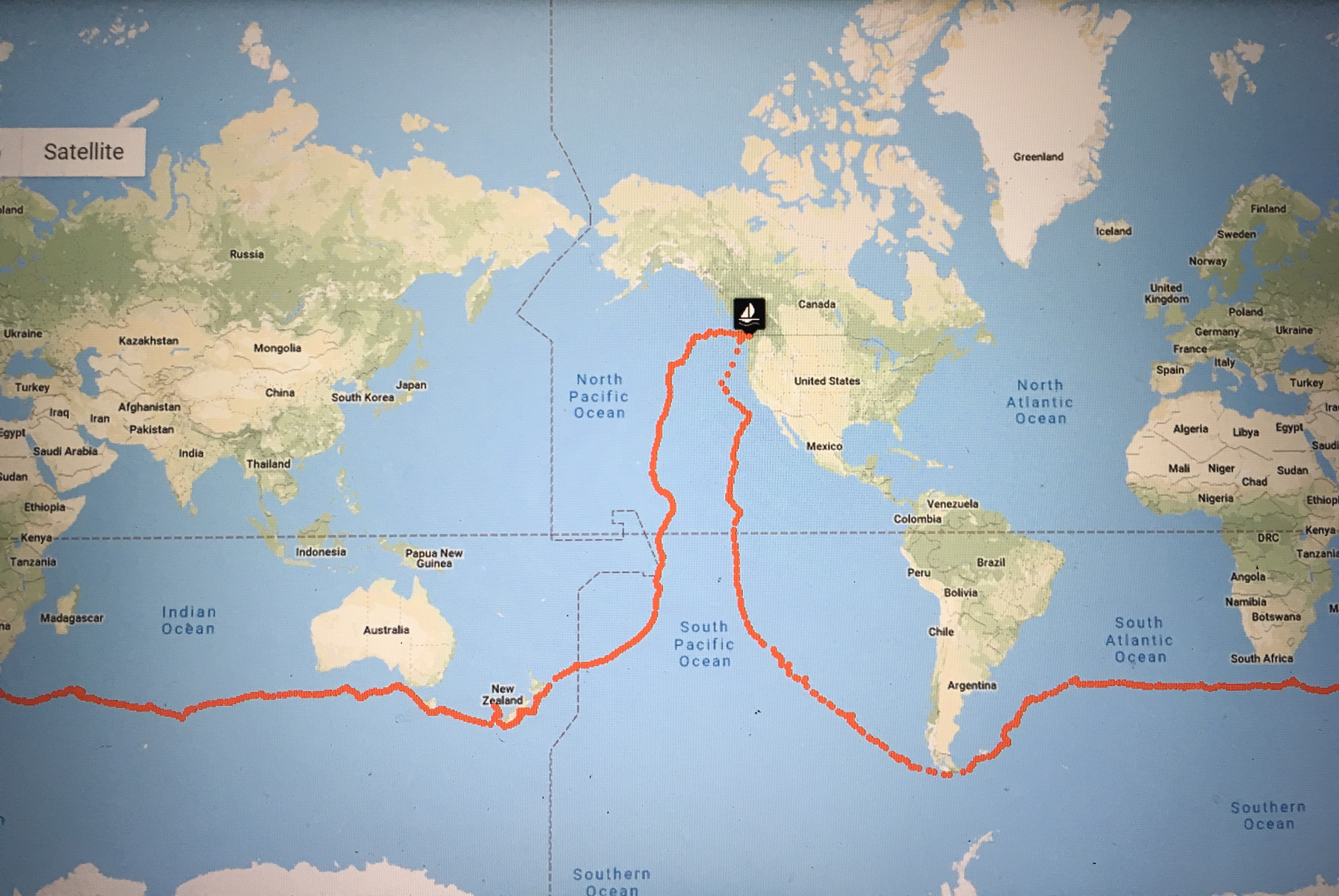 In 2016, Jeanne’s two circumnavigation attempts (started 19th October and 13th November) ran firstly into weather and then into gear-related problems. Intended to be a fourth single-handed circumnavigation and a second sail  nonstop and without any assistance around the world, both attempts that year were thwarted. A three-day storm, a few days out in October, caused damage requiring a return to Victoria for sail and other repairs and, despite sailing a lot further S on re-starting in November, major problems forced her to pull in to San Diego for urgent repairs.

Her sights were then set on starting again from Victoria, B.C. on 5th October 2017, but a nasty fall from deck-level onto the hard just a week before her planned departure caused serious neck, rib-cage and internal injuries and meant postponing that attempt to October 2018.

Finally, after a third start from Victoria on 3 October 2018, she succeeded.  Several major problems cropped up to slow her progress, but she eventually arrived back just over eleven months later, four months longer than she had hoped, having covered 27,911 n.ml. in 339 days.

Where is Nereida now? ..... Click here to find out

(See 'Travels'  for an overview of her solo passages and for maps showing her position as she sailed around the world from 2004 onward.  See her complete Diary/Web Log here and see 'Articles and Interviews' for some magazine, TV and radio reports.)

Very high medical expenses were incurred as a result of her fall, adding to the cost of unexpected repairs needed to boat gear, following the costs incurred in preparing the boat for her attempt - re-rigging (ready for exposure to heavy weather), replacing worn items and provisioning for that length of time, etc. Those costs have been great, so if you’d like to help by contributing however little towards them, it would be very much appreciated - there’s a PayPal link here.

The UK’s RNLI is independent of government funding and the crews of the RNLI lifeboats are all volunteers. They need our support to keep them well-trained and their equipment up to date if they're to be able to launch safely and succeed in their lifesaving efforts night and day.

Please donate what you can, using the 'Lifeboats link, to show your support for my efforts in completing a circuit around the globe single-handed, via Cape Horn, under sail alone, without any outside assistance and without setting foot on land until finished.

I expected to be at sea for around 7-8 months nonstop, rounding all Five Great Capes of the Southern Ocean, sailing back to my starting point without any outside help and without using my motor (which was sealed) – but, unbelievably, it took just over 11 months to complete - four more months at sea!

Blogs were posted daily to my website and I talked each day to people on land around the world using my HF/SSB radio, which was also used for emails and weather info - so I wasn't quite alone!

All problems that arose (and there were plenty of them!), I had to deal with using tools & spares carried onboard ... and all food for my time at sea had to be with me from the start of my journey - fresh eggs turned daily last several months, onions and potatoes lasted most of the way and I also had plenty of canned and dried foods.

Drinking water came from a water-maker (desalinator) working off my batteries and I had long-life & dried milk and fruit juices. My batteries were mainly powered by the sun and the wind, with a backup diesel generator to help on windless, overcast days and/or when I’d used the radio a lot.

I normally do my own weather routing using information gained from using my SSB/HF radio. (This time, I also had the loan of an Aurora (Redport/GMN) Iridium terminal to get some of the information and it was also used for VOIP contact and posting photos). 'Grib' GFS weather files are downloaded as email attachments and weather faxes come direct from onshore radio transmitters located beside whichever sea area I happen to be in. (I was also given additional helpful information by Northland Radio, who had access to the European weather model.  We spent radio time discussing weather forecasts and options on routing to try to avoid the worst of the storms)

It's clearly of benefit to know when and where a storm is expected.  They were very frequent over a good part of my route and, in my daily planning, I often had to try to stay out of both nasty storm conditions as well as the sometimes long calms in between.   It was frustratingly difficult to keep in favourable winds at times and the lack of a working mainsail, which I was trying to repair over much of the Southern Ocean portion of my voyage, made for slow progress.

(I think I might also now hold two other records by a single-handing unassisted woman: for the longest time at sea nonstop (339 days) and for the greatest distance sailed nonstop (27,911n.ml.)…!!)

Jeanne, aboard S/V Nereida, successfully completed her first nonstop, single-handed, unassisted sail around the world at 2:26 a.m.LT on Monday 8th July 2013, when she passed Ogden Point at the entrance to Victoria Harbour, 259 days and 25,743 n.ml. after leaving Victoria on 22nd October 2012.

This was her third attempt since 2009 to circumnavigate solo, nonstop and unassisted - eastabout via Cape Horn and the Southern Ocean - all attempts made without the help of a shore-based support team.

Previous awards received for her solo sailing were the Duchess of Kent Trophy (January 2012, from the Cruising Association, after circumnavigating solo from/to Cape Town via Cape Horn) and the Award of Merit (2011) and Rose Medal (2009) (both from the Ocean Cruising Club)

Taking part in the Single-Handed TransPac Race from San Francisco in June-July 2006 and then sailing on north from Kauai to Alaska in July-August were turning points in Jeanne's ocean sailing career - giving her confidence in single-handing for lengthy periods at sea.

Cast off with Confidence

Many thanks to these companies for their support