7am Bright day with hazy sunshine through scattered thin clouds. Gybed around on to starboard tack to head more S to keep better wind for next day or so.. Making just 3-3.5kt jst now.

Made excellent contact a short time ago with N.American stations on HF radio - but, without fail, they all copied me better than I copied them -although they were all good and clear enough to me, they all reported my signal was louder to them - myteries of propagation!!

8:20am Back down after checking on Fred - still a problem with steering - ratio knob moving still! Needs more fixing ....

11:30am Writing this while having my usual late breakfast - was nice to open a fresh carton of long-life milk to go with my cereal.
A lovely sunny day, although plenty of thin cloud around. We're really rolling around a lot - probably partly due to running downwind - on a very broad reach - but also the swell period is much less so the waves are that much closer together. We're making 4kt SE in WSW wind of about 10-12kt.

On to deal with fixing the ratio knob ('gear' mechanism) on Fred - more wiring.... There has to come a point when the knob stays firmly put so that he can steer the boat well again, surely?! Fortunately, the sturdy supports give a good framework to stand inside or sit on to help me work off the stern in safety. It's too far to reach from the aft deck.

12:45pm Well, I got side-tracked, well and truly! I thought I'd 'just' check the bilge before seeing to Fred - and there was some water in there I was not expecting since the place I'd thought was the problem area was pretty well dry... So I had to look around to see where exactly the water was coming in from. Just to be helpful, the little hand pump I've been using decided not to play ball when I tried to get rid of the bilge water... and getting that last couple of inches of water out with a soup ladle just does not work!

I'd discussed the issue yesterday with Derek, of Yachting Sports at Hamble Point, who knows the boat well and he'd already suggested that my 'problem area' was probably OK and the water was coming in from somewhere further aft. I double-checked the engine compartment - dry, including around the prop shaft seal. So then I went to check the rudder area and definitely found water creeping in from the rudder stock. So I've tightened its grease gland as much as I could, spending quite a time on that - hope that will at least cut down the water coming in and preferably stop it. Something to keep a regular eye on, but at least I now know where the bilge water seems to be coming from.

3pm Looking rather rainy - can see showers falling nearby and clouds are very grey - think we're about to get wet... Good for washing off some of the sticky salt everywhere on deck.

Finally got to Fred to re-wire the ratio knob - doesn't look to me as though it can move but time will tell. Swell is quite big - 3m/10ft - just had to ignore it as I perched securely over the stern busy working... but it kept wetting my boots.

4pm Fred seems happy again - might need to tighten the wire one more time but, hopefully, not.
Rain clouds have cleared away to the N - blue sky overhead and bright sunshine.
Back to the mainsail - first time today, with other jobs getting in the way...

Had a mug of soup before finishing my stew - an easy meal.

Finally have the sail material cut, folded in half lengthwise with a good sharp crease and all edges hot-knifed to seal them from fraying (not well done, but never mind! My excuse is rolling around in the swell...). Next step is to join the two long pieces.
Then it's on to deck work, readying the sail for access so I can sit on deck while I sew the material over the torn area at the leech of the sail between the two top battens... That can happen in stages, as and when it's calm enough to do the work on deck.
In between, I'll tie the sail away onto the boom, with the extra material in position, waiting to be sewn. The actual sewing could get difficult, since I'll be going through at least three layers of sail fabric but I'm thinking I'll make a quick, rough tacking stitch near the edges to hold it all in place first and then it will be easier to finish with proper stitching. I also have some narrow double-sided sticky tape to hold it in place which could be useful. Not looking for a thing of beauty, just looking for function - and to get it finished..!!

8:20pm Wind has backed a little - we're now making between E and ESE but the wind has also dropped so our speed is down around 3.5-4 kt - forecast to drop further overnight and into tomorrow.
Time for my sleep routine to begin, if I'm not to lose sleep hours tonight - I'll be up for my 1900Z report - at 11pm LT. 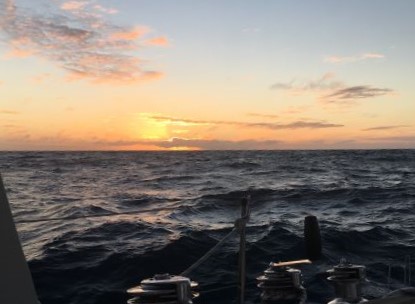 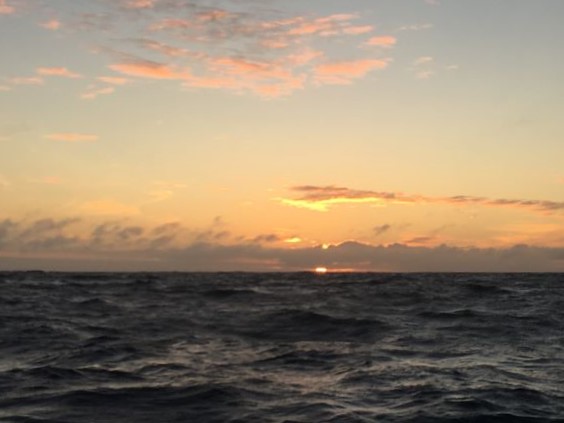