Wednesday 9:30am Tahiti/Hawaii time (Wed 1930 GMT) All in all, not much change from yesterday again - lovely, gentle, enjoyable Trade Wind sailing, although rather gusty conditions under frequent, scattered, large clouds - boat speed varying a lot.

3:30pm Bright day with most of the earlier cloud gone away - very little seen now.

Was having a nice siesta just now when my AIS alarm went off... A fishing vessel, 'Sea Pearl', from Hawaii almost certainly, heading W, was due to cross our bow 2ml off in about half an hour. Despite looking out ahead for some time around the expected time they would cross our path, I couldn't see them - too small at 85ft long, even when only just over 2 miles away.

It was so enjoyable being on deck in the bright sunshine and in such lovely sailing conditions that I got my camera and took a video to remind myself of it in the future!

4pm is the time of the Hawaiian Afternoon Net on 7088kHz each afternoon. Propagation today was excellent, unlike two days ago, and it was great to be welcomed once more into the group from all the islands.

Our speed is still pretty good at around 6-6.5kt but often drops a bit - so our DMG, as measured at 9am tomorrow morning, will certainly be down again - hopefully not by too much.

Weather and winds ahead over next few days still looking very good - we should be able to maintain this good northward progress for several more days at least, with our present NNE course slowly becoming more NE over time.... Winds expected to veer more to SE and then S, and possibly ease a bit very soon, but then should pick up for a time.

Friend Steve, with Vern and Travis, from RVYC , who left Oahu a time ago, are presently just a few days out from Cape Flattery on their way to Victoria also - but motoring in a glassy calm... I just hope that we don't get similar conditions, since I'm not allowed to motor and so need a fair wind to make any headway. Fingers tightly crossed on that!

6:30pm Getting slightly concerned about 'Water Music' - chances are that they're fine but there's been no contact with them since this morning so no confirmation that all is well on board. They don't seem to have AIS to show where they are and their Iridium phone number seems to be out of service (have tried it many times)... so no way of knowing where or how they are if they don't come up on radio when expected - and they haven't done so all day long. Hoping they'll make safe landfall on Niue soon, so we can all relax.

8:30pm Cloudy night. We've picked up speed a bit - looked up on deck - big grey cloud above and to port, hiding the bright half-moon - 'cloud effect' - increased wind under cloud giving us more speed, as usual. Nothing too extreme, so happy to make more distance, but a bit 'bouncy'. Wind has veered slightly to just S of E, as expected.

11pm Clouds have all gone, leaving a beautiful clear night sky with so many stars and a bright half-moon shining down over the sea ...and us. Speed varying still - often we're still making 6.5kt, other times we're down to 5.5kt. Seas are smaller than earlier, but we're still moving about a lot.

8:30am 'Water Music' came up on PolyMagnet to say situation basically unchanged - all well on board, still have water leak but under control with still no idea where coming from. A lot of relieved people listening! After their report to the Net, they then tried to make contact with Taupo Maritime Radio but could only do so indirectly via another boat also on frequency who relayed for them. They should arrive Niue tomorrow morning.

Almost complete cloud cover now - but wind still well down so speed down at around 5.5kt - must shake out the first reef.
(Later: Cloud cover left behind - wind still down compared with yesterday.
Received email from 'Water Music' - comms problems yesterday - sent apologies for concern caused by silence.) 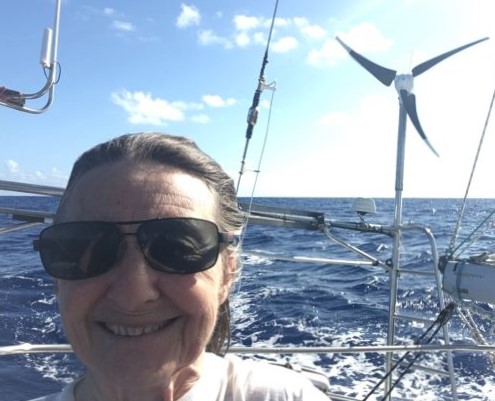