Sunday 10:20am Tahiti/Hawaii time (Sun 2020 GMT) Warm, sunny morning but with quite a lot of scattered cloud and the usual 1.5m SSE seas.Checked updated weather info - now heading NNE with slight course adjustment. Seems we'll definitely run out of wind for 1-2 days over next weekend, as the High spreads, but a Low is then expected to pass over and will give strong wind. It's nice to be on a fairly direct route to the Strait of Juan de Fuca.

Changing from Honolulu to Pt Reyes for weatherfaxes - Honolulu was excellent for the Tropical region, even when well S of Equator, but now we're further N, the Pt Reyes transmitter (N of San Francisco) gives slightly more relevant weather information.
(Later: Having to stay with Honolulu - reception of Pt Reyes transmissions is terrible whereas Honolulu is coming through beautifully)

10:45am A lot of the earlier cloud has cleared away - blue sky mostly now - another lovely warm day - need to store them up, since it will soon get much cooler and maybe even rainy!

11:40am Thoroughly enjoying a mug of coffee as I catch up with a few emails and check over latest weather info.
The satellite IR photo shows clearly the line of cloud N of Hawaii over the NE Pacific that is giving a good 'wind corridor' NE towards B.C.
Temperature in cabin is 31C and I have a small fan blowing to keep me cool - rather different from the snow I heard yesterday that they had in Melbourne - and Sydney is not exactly warm, either!

8pm Bright moon, clear sky, lots of stars - a very pleasant evening, soon after sunset - but a big crude oil tanker ZHEN HUA35 was on its way, heading W across our path from Long Beach, L.A., to Shanghai, China. They were due to pass rather close by, around 7:30pm, not long after sunset. Contacted them on VHF radio and they passed astern - they diverted slightly to do so. Wasn't sure they understood me, clearly being a Chinese vessel with some poor English spoken by three different people I heard on the radio but we did confirm Nereida is a sailing vessel.

10:30pm Had some fun on the radio - put out a call to see if anyone could hear me and several responded so had a few chats - Bob in B.C., Peter, Tom and Trevor in Australia, Craig in Arizona and finally Andrew in Fiji.

6:30am Woken earlier, near dawn, by sudden strong conditions - found our speed was way too high - wind and seas w well up under overcast sky. Hurriedly furled in a lot of genoa on finding we were rushing along wildly and swinging about with the AP working far too hard - not a good thing to have happen. Thought I caught sight of 10kt, which might have been our speed while surfing on a wave, as I ran up on deck... Waves have built up with increase in wind.
Now still making 6-7kt, with small genoa, surfing at over 8kt and seas looking rather angry. ... Would like to tie in 2nd reef but not possible while mainsheet out so far and sail pinned to shrouds. Would need to head up - but means taking genoa off the pole to do so- one reason to reduce it a lot, as well as slowing us down in the meantime.

7:45am Waited just a short while to assess the situation before acting... Essential to get that second reef tied in... So furled in more genoa to tiny, took it over to port side - off the pole - and then took up on mainsheet (easing preventer as that was done) to get mainsail off the lowers and spreaders. It could then finally be lowered to reef down - but only after luffing up - heading up into the wind a lot so mainsail was no longer filling in the wind. All took quite a time but is now, finally, done and we're roughly back on course. Need to unfurl some genoa now - feels as though the wind, predictably, has died down a bit now, although heading downwind again, as we are now, always feels a lot smoother and more comfortable - misleading, in fact... Can see edge of cloud layer and a long thin patch of blue sky to S, astern... Sun is trying to peek out from grey clouds around. Need to check on wind direction and see about the genoa...

8:45am Back down below again after getting us back goose-winged and on a good course. Found a broken control line on a starboard genoa car, so had to replace that, so the car could be positioned correctly for a good lead on the genoa sheet from the pole, before I could take the genoa back on the pole to starboard... Took a time to tie it in place and rolling around downwind in the increased seas wasn't exactly helpful! Genoa is now furled down to beyond second reef mark and mainsail has second reef tied in. Will need to re-do the line I replaced at some point - it's doing the job I needed just now but it's not quite the right length.
Running generator and watermaker and charging computer...
Sky is grey and air is feeling a lot cooler... having to wear more ... We're definitely into more temperate weather now
Think I need some more sleep! 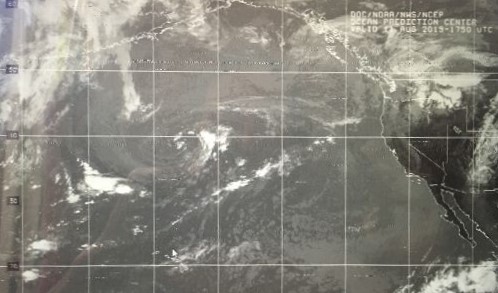 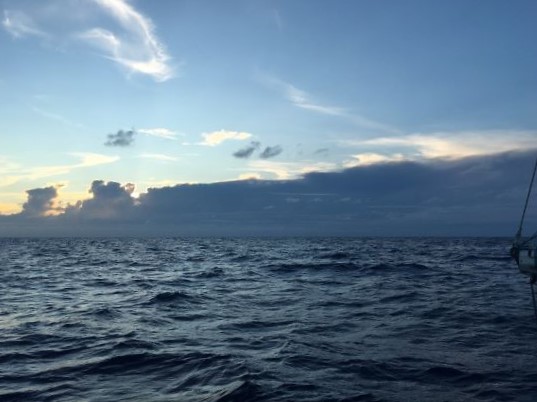 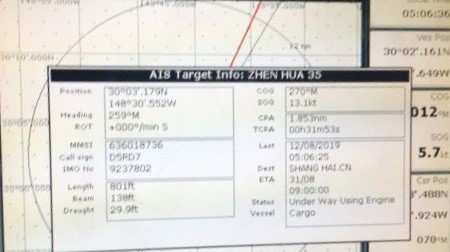