Dave and Patricia on 'Chameleon kept a close eye on the Low that got in my path to Tahiti, causing me a major problem getting there, and sent several photos of it, showing how nasty it was - and why they worried I might get too close to its centre! 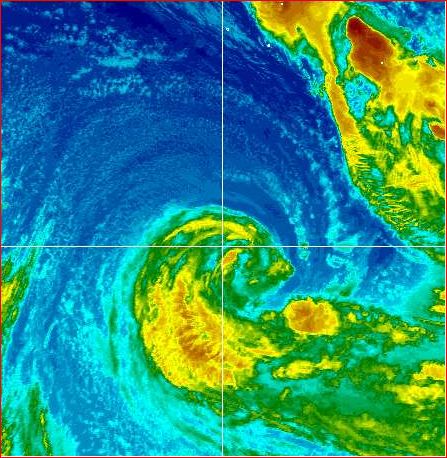 This is the Satellite picture of the low which we have dubbed Jeanne's low. 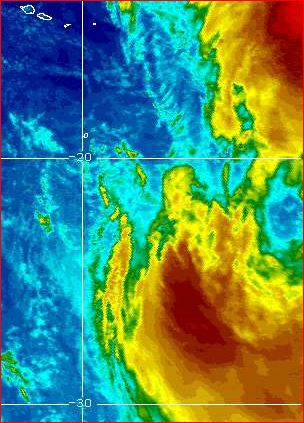 The picture of the 28May is when it dropped below her but the sat pass shows it in all its spendour. We did not get such a good picture when she was skirting around the edge of it but I have given one (which) has her position marked.

David sweated this one as it was a nasty low and he did not want Jeanne to experience it in all its glory. She was very lucky to keep the boat going well and really dodged a bullet. Amazing really given the autopilot problems she had/has.

Well the N edge of the that Low gave wind to help us get East as it headed SE slowly, but the Fronts and troughs from another Low following caused a lot of rain and squalls all day long yesterday and on into the night.
.
I spent a lot of today catching up on sleep - just over three hrs last night due to a fear of being driven N in the dark onto unlit Mauke in the S. Cooks group, part of French Polynesia. I'd got up around midnight to check on our progress, knowing we were passing through the group of islands, although they were well off, the closest, Mauke, being over 20 ml off our path. I heard a change in the wind, which was rising in a rainsquall, and when I looked at the chart-plotter screen, to my horror, I saw that we'd changed course and were heading NNE at 6.5 kt - directly towards Mauke. 3 hours like that, and we'd be on it.... We'd headed up in a squall, our windsteering being overpowered by the sudden change in wind strength and direction. I hurriedly donned my foulies and headlamp - it was pitch dark out there...

Heaving to overnight, as I'd done before, wasn't an option, since I couldn't be sure we wouldn't drift into danger... I needed to gybe - but had both headsails out as well as the double-reefed main .... I furled in the genoa.... got the stays'l sheets organized, centred the main, ....all in a torrential downpour! Tried to steer off the wind - very difficult... the boat seemed to want to head up all the time.... Couldn't see the instruments clearly to show me the wind direction or our actual course, only the compass, lit by my headlamp. I needed to sheet out the main on the other tack but if I left the wheel, it turned rapidly to head us up again.. it needed tying in place... but that wouldn't work either - I had to keep turning the wheel to counter the boat's turning either way... In the back of my mind was the thought that if we gybed, maybe we'd start heading to another island I'd seen to the S ... a fair distance, but ...

Suddenly, it occurred to me that I could use the engine! Switch it on and I could steer us safely eastward... just for long enough (maybe 3-4 hrs, I calculated) to get us clear of the problem and then I could sort out the sails, probably in less wind by then, and get us sailing again... I really missed having an autopilot to turn to, to hold us on a fixed course and release me from the wheel while I saw to the sails.

So I sat at the wheel steering VERY actively for well over 3 hrs in continual torrential rain, trying to keep us headed E, rather than N where Mauke lay - a fair distance away, but it felt far too close! Kept coming to with a jerk, finding my eyelids had closed - I was very tired but just had to keep going...!! When the wind eased and settled in direction, the squalls having finished, I realized that Fred was happily in control again if I held the wheel still at a certain point - so we were finally able to get back safely onto windsteering headed E once I'd sheeted out the main and trimmed the stays'l. I was soaked through - it's a good thing the air is not too cold hereabouts .... but I still felt chilled and was pleased to put on a fleece again, once I'd dried off, and my warm bunk was sheer bliss...

Wind this morning was fleetingly from WSW - thinking it was staying there (as forecast), I changed over the pole - but it immediately veered back into WNW... and stayed there, dying slowly, all day long. Only around sunset did it back to W and by late evening, to WSW. I left the genoa pole where it was and sheeted the stays'l on its pole to port - got interesting trying to do that without an uphaul... but I managed it finally, after a fashion! (Wasn't for long, fortunately, but was an interestinhg experiment!)