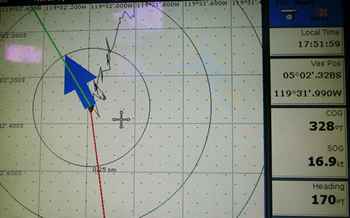 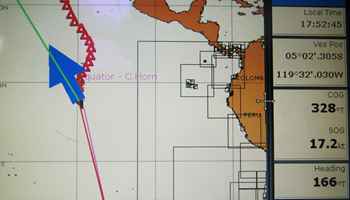 Well, so much for thinking seas would lie down even more than last night, enabling me to climb the mast safely to replace the wind transducer this morning ....!

By 8am, I'd decided I had to tie the first reef back in again - we were beginnig to heel far too much and speed was well down in increased wind and seas. An hour later, I was really pleased I'd done that, when a rain cloud passed over and we were suddenly heeling even more in stronger wind.

I furled in some more genoa and then sat for a bit in the cockpit, just to make sure we were OK - my eyes caught sight of our COG - 340T .... WHAT??!!! Considering we'd been heading S a short while earlier, that was unbelievable - had the wind really swung around that much?? Being under wind steering, we would have simply followed it around, if so, although I hadn't sensed any big change of course...

I went below to look at the plotter - it showed a BIG NW current and it claimed we were being taken backwards, despite the boat still pointing167T, as it had been for some time in the now-strengthened E-ESE wind... SOG values were being shown as 10-17.3 kt!! I just couldn't believe my eyes... and watched in disbelief as the plotter showed our track dodging up and down in this amazing 'NW current' effect. I took lots of photos for the record!! If it were really happening (I had my doubts!) then how long would it continue - and how far off our course would this current take us... Should I head more SW in order to try to get out of a strong eddy?? I was perplexed - and a mite worried, to say the least! It went on for a good half-hour, but finally, near 10am, after a momentary alarm showing 'posn fix lost', things calmed down - and we were shown as back on course, making 6.1kt SOG... and all has, thus far, been fine ever since, although by midday, I had to tie in the 2nd reef - winds have definitely got up to F4-5 - and seas easily around 3m/10ft or more - it's a bit bouncy out here!

I'll see if I can send a photo or two for posting!

I checked the resistances again at the rudder reference unit connections to the course computer - all behaving as they should. (Wonder if I had range set too low yesterday when trying to measure, although meter was definitely misbehaving...)

We're presently 'just over the Ecuador border into Peru' - level with Chiclayo and Mochumi and the amazing ancient 'adobe cities' nearby... Close to where Thor Heyerdahl took off on 'KonTiki' - a straw boat similar to the small ones still in use by fishermen on the coast now - to test his theory on the current (that I'm in now) and the peopling of the Pacific Islands.

See my website's 'Travels' page - go to www.svnereida, open 'Travels', then click on "Where is Nereida?"

http://www.exactearth.com/media-centre/recent-ship-tracks/tracking-nereida/ - courtesy 'exactEarth' using their polar-orbiting satellites - good everywhere, especially nearer the poles, i.e. should be good when in the Southern Ocean.