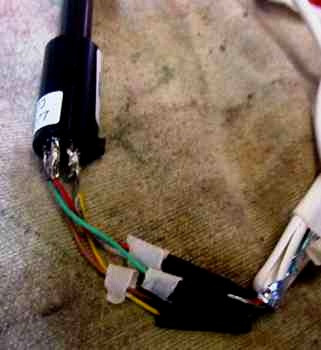 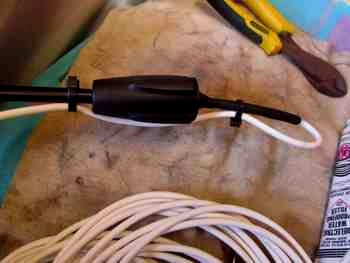 This afternoon, I felt like opening some bubbly to celebrate! After a lot of time and effort this morning and into early afteroon, I tested my badly-soldered connections between the wires of the 5-core cable and the pins of the spare wind transducer arm - and found they are working!! Yippee!! The seas weren't too bad this morning, so I was able to dig out my soldering kit to see what I could use on the fine wires and pins. I was pleased to find a butane-powered soldering iron with a nice fine tip - recently bought to be ready for exactly this type of job. I started tinning the wire ends that I'd prepared yesterday - some were quite difficult until I cleaned them with some acetone. I was so unsure that I'd then manage to solder the wires to the pins that I kept on going, rather than looking at mounting the vane - no point in that, I thought, if I can't solder the connections...

To my surprise, tinning the brass pins was quick and easy - that gave me hope...! The fiddly part was holding a fine straight wire onto a pin while I put a touch more solder on the heated, pre-tinned pair... Totally the wrong way to do it ! I should have wound the wire tightly around the pin, heated and then added solder - but there was no way that was going to happen - five times over.. especially with the small gaps between the five pins!!!

Before I started, I double-checked the colour-coding of the pins - imagine if I'd got that wrong! After managing to solder the ground wire to pin1, I felt more optimistic that this was going to work - and the seas played ball, to begin with, by staying far calmer than yesterday... The last two joints had to be re-done... wind and seas had got up and were not helping... In order to test it all, I had to crimp two missing small spade terminals onto the far end of the tiny wires and then plug the (now five) terminals into the spare wind display. Next step was to connect the Seatalk cable between the wind display and another display - switching everything off before doing so... I hardly dared switch on again...but there it was - wind info on the displays... YES!!!

Next step was to cover the pins and wires individually with pre-placed heat shrink which acted both to keep the joints together and also to insulate one from the other - another test - it still all worked... I kept holding my breath! The cable outer covering was replaced and more, larger, heatshrink placed over that and on over the five pin connections... I noticed a slight gap at the base of all the pins, so covered the area all around with some black mastic 'gunge' to keep any water and air out. Finally, worried that the connection might get stressed by being pulled, I made a couple of loops and cable-tied the cable to itself, the vane connector cover and vane arm - it felt pretty secure and I tested it yet again - still working...!!!!

By the time of my 3pm daily weather and position report, it was all done. Having had grave doubts that I would succeed, I was feeling very, very happy as I went up on deck to check on cloud cover and sea state in bright sunshine... :-) I took my time... !!

So now I still have to mount the wind vane unit on the stern arch (another practical challenge, with no base unit available to use to keep it upright!), run the cable down from there to the spare wind dispay, run a Seatalk cable to connect the wind display to another display and then finally calibrate the wind display - a way to go, yet! The good news is that the weather looks set to be helpful for working on deck - we're heading towards the S.Pacific High, so the wind is forecast to get lighter - maybe too light - and, hopefully, the seas with it. Tonight, the wind is slowly backing so I've had to adjust Fred to keep us on course.

6.45pm Heard some rain falling, as I was in the middle of my meal of pasta.... went up on deck .... Rain became really heavy, with zero visibility ahead! Wind, fortunately, didn't get too strong - to around 20kt, I guess, so we heeled a bit and picked up speed - but only to ~6.5 kt - not too bad... After about five minutes, which felt like lots more, the wind died right down as the rain stopped .... and there we were - just dawdling at around five knots for a time in a backed wind... The sea had flattened in the heavy rain but the occasonal bigger wave came by to heel us over. The sky cleared... and all became calm.

It was gone sunset, but still light.... More grey clouds on the horizon, so I decided to furl in some genoa for overnight...... The next raincloud might not be quite so benign!! Almost time for the Pacific Seafarers' Net, so I noted the cloud cover and seastate and went down below - to finish my meal!

Radio propagation is still all over the place - but on 14300kHz, this afternoon, Rex, KC5AGO, in Kansas, came up very clearly to take my report, whereas I had trouble copying Bill, KI4MMZ , in Florida, and this evening, after the Pacific Seafearers Net, with good copy on Jane, NH7TZ, in Kauai, I was able to have a long chat with John, VK4DBJ, near Brisbane.

Yesterday saw a rare event - a ship sighted on AIS - factory ship from Japan (or China?) - 'Xinshiji 206' , busily fishing 3 miles off - no response on VHF, even when in clear sight on the horizon.... but they stayed well off and, eventually, were left astern.

See my website's 'Travels' page - go to www.svnereida, open 'Travels', then click on "Where is Nereida?"

http://www.exactearth.com/media-centre/recent-ship-tracks/tracking-nereida/ - courtesy 'exactEarth' using their polar-orbiting satellites -, especially good nearer the poles, i.e. should be good when in the Southern Ocean.

Unfotunately, having run out of lithium batteries for the GPS tracker unit, the other website can no longer keep my track up-to-date - it stopped on 17th November...