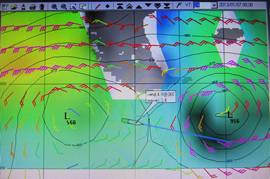 No wind at Cape Horn

I've had so many emails of support wishing me well as I try to round Cape Horn - especially after my last time here - it has been wonderful knowing that my journey is being followed by so many warm-hearted people...and makes this feel very special. Thank you all so much!

9am Bright sun - but wind dying...! Clear sky overhead but low cloud, ahead to port - to N and NE. Making only ~4.5 kt . Less than 110 miles to my "Cape Horn waypoint" (103 miles S of Cape Horn itself) - my turning point into the S. Atlantic! Could become frustratingly slow going...

Waiting to get latest Ice report from VG to see where the two icebergs of concern to me have drifted to... (Later: The nearer one looks as though it's drifted out of my way a bit - although I'll still have to keep a good lookout when in that area. The further one looks to be getting nearer my course - all depends on winds over next few days, until I get closer) I'd mentioned, when sending a position report, that two bergs were possibly a problem for me - just got an email back from Guillaume in VG Paris HQ: "Si jamais tu vois des Icebergs, merci de nous envoyer les photos!!" ("If ever you see some icebergs, please send us the photos!") I replied, agreeing - but hope I don't get close enough to any!

Made use of calmer conditions to make some fresh coffee - lovely! Solar panels putting 4-6A into batteries, despite slight cloud. Warm in sun under canopy but air is cold. Cabin temperature: 10C; sea temperature: 8C - wearing lots of layers!

1pm Struggling to make just 2.5 kt in light wind, about F2, from NW. Short rainshower mid-morning, otherwise sunshine with some cloud... Pair of magnificent Southern Royal albatross were circling around earlier for a long time before moving away into the distance... then a (smaller, but still big) black-browed albatross and a small group of prions. Tiny white-rumped storm petrel nearly made me dizzy at one point - flew in circles around and around, close to sea surface! Sea is no longer rough but still easily 4m/12ft or more, at 8-12 second intervals - long, slow swell. Tried to take photos of the albtross, but not one came out showing the birds well...

Heated up my stew while gas tank was still warmed up from sun on it! Very relaxed day today - caught up on all my emails and tidied up!

Keep looking at grib (weather) files - the Low that was expected to form to E is now being shown there and very deep/intense - but is now expected to move away without causing me too much of a problem - fingers crossed the computer program has got that right!! Second Low to W is expected to diminish - so we might be about to have a lucky escape! (It's the two Lows either side so close to here that are causing our lack of wind with their opposing wind directions -see photo posted above!)

6.30pm We're down to almost zero boat speed but 1.5 kt SOG - a good thing there's a fair current that we're drifting East with! Just about making our course with the AP working hard... Still lovely bright sunshine,although the air feels cold. Finished off my stew - hot! The butane in the tank was still warm enough from the sunshine to gas off.

9pm - Sun sinking but still bright. Feels like 5-6pm!! I can't believe how the boat is lying! In no wind, I gave up trying to head the boat with the AP - was taking too much power & struggling.. So we've now gone hove-to and are drifting BACKWARDS!!! ... at 0.3 knots ENE - which is not too far off our preferred course of 102T!

9.30pm Took the wheel for a bit, despite the chilly air at sunset with a clear sky, and got us pointed in the right direction... A little more wind seemed to have come up (F2, 4-5 kt maybe?), so now we're back on course, making 2.4 kt again - feels fast compared with 0.3kt!

Sea is so much calmer, it feels weird - this is not the Southern Ocean I'm familiar with! The long rounded swell is down to just 3-4m.