Thursday Strong winds and big seas throwing us around over afternoon and evening - to 30 kts, later reducing to 20-25kt, but then up again overnight into Friday around dawn.
Beautiful clear star-filled night sky early on was replaced later with cloud as new Low passing close by affects our weather.

4am Wind veered and increased to NW 30-32kt with rain... Lasted for quite a time before eventually down to 27-29kt, with occasional gusts, backing to WNW

10am Wind has backed further - had to trim sails and adjust Fred for broad reach. Really having to be careful moving around down below with the seas coming every 8 seconds or so. We suddenly lift and then heel one way and then the other - the rocking motion can be quite fast and violent at times and is a real test of whether or not things are well secured...

Midday Wind now around 20kt from WSW and seas still impressively big at around 5m/16ft but heading downwind always feel so much better and smoother than the rough and tumble of beating upwind as we were earlier - that was really not pleasant but all feels good now. The sun is even getting out again in between the big white clouds.

2.30pm ....So there I was, sipping a late morning coffee,trying to figure out where certain downloaded grib files are stored on my computer, feeling slightly guilty that I should have shaken out the third reef some time ago, with wind having generally eased to just under 20kt, when I realised we were speeding along at around 6.5kt - in wind of almost 30kt that had suddenly appeared from nowhere - well, maybe from a big grey cloud, well off to starboard...? A quick rethink... maybe we'll leave it in a bit longer!!! But gybing on to starboard is getting urgent - we're struggling to make NNE whereas NE would be good...must get on deck and not leave that any longer...

Having just finished my coffee, I noticed a lot of dried milk powder paste in the bottom of the mug. Clearly, the skimmed milk powder I'm using for tea and coffee instead of the equivalent UHT milk (liquid, long-life) I normally use, stowed for this trip in an effort to reduce weight on board, does not work as well as the Nestle milk powder that I just ran out of and got in Mexico. That might not be 100% milk powder but it dissolved far better and tasted fine... Oh well...!

3:45pm Lovely being in the cockpit in bright sunshine, watching the birds wheel around us close to the waves - not many, but the usual ones - a Black-browed albatross with its distinctive bright yellow bill, Antarctic prions with their dark 'collar', Gt shearwater - brown on top and mainly white below with distinctive black and white head markings, a dark white-chinned petrel. Of course, very difficult trying to get decent photos and as soon as I started to go down below, a Great shearwater came really close...grrr!! 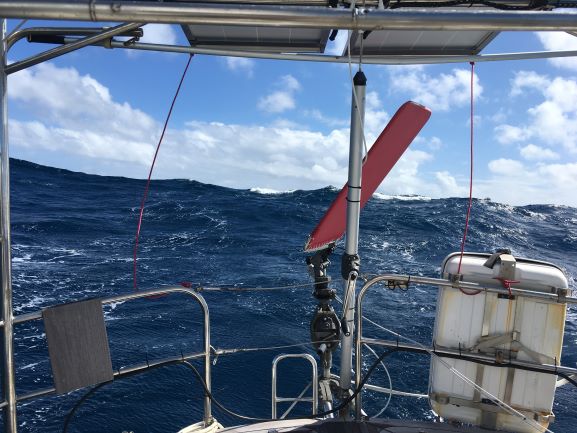 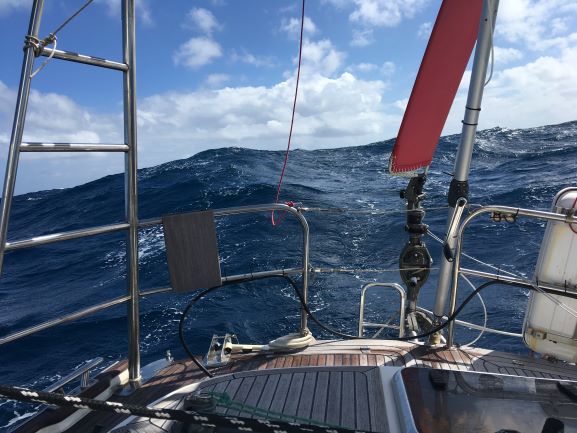