Bright, hot sunshine again on Sunday - a busy day on the water, with lots of sailing boats around - several of which came close to wish me well - and two even offered me a bottle of wine! (Pity I'm not allowed any visitors nor to accept anything from anyone, liferaft apart......'unassisted, solo' ....!)

I busied myself with some more jobs while keeping an eye on the wind and checking yet again on timing of the ebb tides. With virtually no wind all day long, people were motoring everywhere - and I was clearly going nowhere although I'd been hoping for a possible 4pm departure on the ebb tide - but at that time there was a W wind (which would be heading us when sailing SW down the channel) of only 5kt... which died to 2 knots not long after, so it was a good thing I didn't start off.....

I thought about how I could raise 30m of anchor chain with no windlass to help... I made use of a spare pole guy- one end of the line shackled onto the chain, the other taken to a mast winch ...and another short loop of line on a bow cleat with a shackle - to keep the chain in place while I re-positioned the long line from the mast, once I'd winched some of the chain up. When I used it finally,, the system worked well, albeit with plenty of dodging about between bow and mast, with lots of time taken fixing and releasing the shackles onto and off the chain... 5m of chain were brought up at a time, once I'd got started.

After that, and in between chatting to a few boats and relaxing in the sun having my lunch, I fixed the Lexan washboard firmly in place with sticky-backed foam strip to act as a water-barrier in case we get 'pooped'. As we approach the S. Ocean, I shall add some duct tape all around the edges on the cockpit side, to ensure a water-tight fit!

I went to use the seawater pump - and found it totally unresponsive- the seal must have gone... I dug around and found the service kit with all the rubber bits and pieces...and instructions. Started dismantling the pump to see what needed replacing and then remembered I had a complete spare unit somewhere ... Found it and replaced just the top half - it's working fine! Sometime, I'll investigate further and service the old part ... but not just now.

Final job of the day, which continued well into darknessl, was to service one of the winches I was conscious of not having seen to during my preparations. It definitely needed the attention... It's always good to hear the winch purring in action after a thorough cleaning and greasing... and no bits dropped overboard!

Looking at local weather forecasts, it had seemed earlier that on Monday there might be NE 5-7 kt when the afternoon ebb was running - but later that was changed to N wind Monday morning, dying away during the day and staying very light for several more days - so I planned to wake up at sunrise to check on the wind, ready to leave if it was helpful - assuming I could raise the anchor OK - I had nagging doubts!

Another lovely, starry night - with a great view of everywhere in the Bay area, all lit up brightly, with a waning, bright moon over the dark outline of Angel Island.

A beautiful dawn sky on Monday...the tide was clearly already ebbing - and the wind was 7-10 kt from NW - perfect!!! I set to, raising first the full mainsail, whose sheet I left loose so as not to start us sailing while I raised the anchor. The lead wasn't quite right - I shifted to the other side of the mast where I could use my body to lean on the line and keep it from over-riding on the winch... As the sun came up higher over San Francisco, all was going well. We had plenty of water room, so although we started drifting as the chain came up, that didn't pose a problem... Suddenly. I saw the anchor above the water ... and ran back to the wheel to get us sailing nicely towards the point leading to the Golden Gate Bridge... What a lovely, sunny day! Clear blue sky contrasting with the red of the famous towers of the bridge - which we soon sailed under - with loud noise coming from the rush-hour Bay traffic. Not a ship in sight...excellent! I contacted Traffic Control and the CG - thanked both and they wished me 'Bon voyage". We were making over 6 kt SOG with the ebb current ...! We'd escaped - and were having a lovely, enjoyable sail in bright sunshine!!

Tonight, as forecast, we're struggling to make headway South in light wind from the North - but we're at sea and on our way - finally! 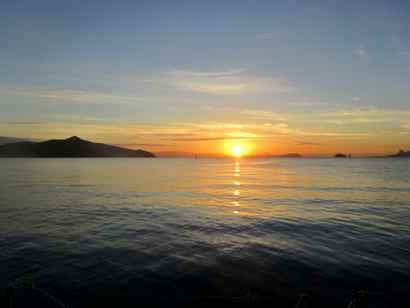 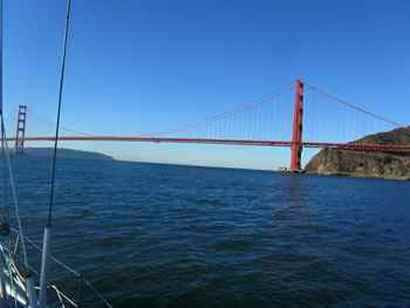