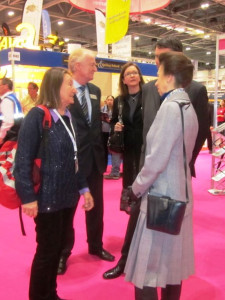 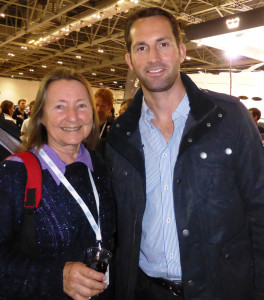 Arrived in rainy, windy London on New Year's Eve and it's been nice to catch up with family and friends since then, as well as being able to visit the London Boat Show this week.   I've been privileged to meet with Princess Anne, Ben Ainslie (see photo above). Mike Golding, Geoff Holt, ...  and have had help with boat-related queries/items from several people - thanks to Andy of Andark Diving, Pauline of Henri Lloyd, Stuart and Karen of Commodore Sailing, Amber of Aquafax (Lewmar), among others.   The UK Boat Shows are always good places to discuss and get boat problems positively resolved!

Very many grateful thanks are due to Keith (in Newcastle) of British Airways - for kindly coming back to me with a change of flight, saving an expensive day-long bus trip down (and back up) the entire Baja peninsula to catch a flight to London from Cabo SL (San Diego is so much closer to Ensenada) - becoming a direct flight between San Diego and LHR, rather than having to change at LAX.

And more grateful thanks for the helpfulness and honesty of the ABC bus company of Ensenada/Tijuana and also heartfelt thanks to boaters Spike, Victor, George etc, in Cruiseport marina (Ensenada) who spent quite some time retrieving my missing suitcase & computer bag (thought I'd never see either again!) - the result of a difficult Mexico/USA border-crossing and misunderstanding on my part after catching a bus to Tijuana from Ensenada ..... "All's well that ends well!!"  The only problem is not having either my suitcase or my computer with me in the UK now (they're both back on 'Nereida') - so I've been unable to respond to a lot of emails I'd hoped to deal with while here.

I had a warm welcome from many cruisers in Ensenada on my arrival there from San Diego in December and Enrique and Jonathan in the Cruiseport marina office have been really helpful, both with my initial clearing in to Mexico and since then.   Having never been on a motor-bike before, it was an enjoyable experience to be driven as a pillion-passenger from Ensenada to Del Mar, just north of San Diego, for a short but enjoyable visit to a welcoming Polish family for their 'Wigilia' celebration on Christmas Eve.

The 'Yachtsman of the Year' award today went to Bob Shepton  for his recent trips through the NW passage with crew - often disadvantaged young people ... I'd been shortlisted along with Mike Golding. 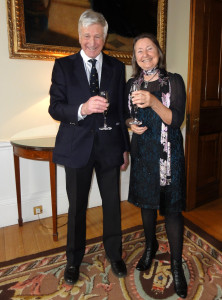 The Trinity House venue across from the Tower of London was full of interesting history of the pilots, lighthouses, lightships and lights all around the UK (and at Europa Point, Gibraltar!) for which they are responsible and the Luncheon was an enjoyable event.   While there, I was pleasantly surprised to be told by the Commodore of the Royal Cruising Club of an unexpected award - their prestigious 'Seamanship Medal' - that they wanted to award me in March - but in view of my being in NY at that time, hopefully it can be presented later this year when I'm back in the UK - maybe September.   It was also announced at the O.C.C. Dinner (on Friday 10th Jan) that I'm to be awarded the Barton Cup in April - another high honour!

I've been rather put out to think that I'll be missing the 'Golden Oldies' awards event in February at Simpson's in the Strand, with Terry Wogan hosting what sounds like a fun-filled evening of laughs - they wanted to give me the 'There's Still Snap Left in the Celery' award !!!

I'm looking forward to my return to San Diego and on to Mexico with several useful boat items, ready for sailing around to San Carlos, in the Sea of Cortez, where I'll be busy sorting the boat out over the following few weeks (apart from my visit to New York at the beginning of March).