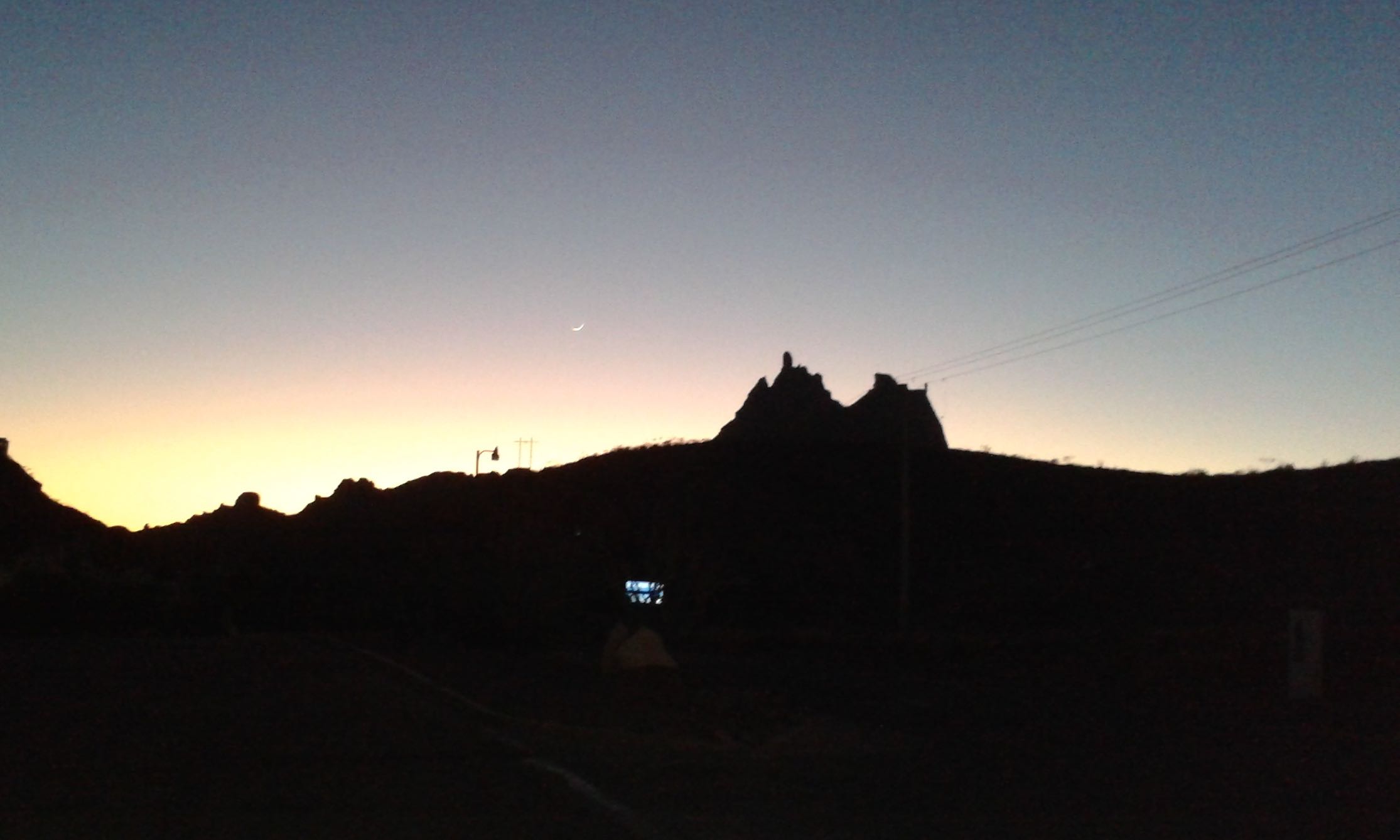 Work continues in sunny but dusty San Carlos where the sliver of a new moon appeared in the lovely sunset sky over the distinctive two peaks last Sunday.

Some good work has been done over the last two weeks - the boat is looking much smarter (I even hosed the dust off the decks tonight) and I’m feeling a lot happier!   It’s great to have so many friendly, helpful people around – typical boating community here, with everyone helping one another…  (Particular thanks to Tony & Patsy of 'Forbes & Cameron'  and Brunton's in U.K. for getting a much-needed greasing nipple to me via San Diego for my Autoprop.  Also to Alain of ‘Blue Moon’,  and Ed of ‘Panacea’ - and the cheerful yard workers who have often been very helpful as well)

Five layers of a barrier coat were applied in quick succession to the underwater section Friday fortnight ago, after thorough sanding, and then a light sanding was followed by four coats of Coppercoat on the following Wednesday.   Then the low loader came along early on Monday to raise “Nereida” slightly so the blocks under her keel, as well as the supporting stands, could be moved for the process to be repeated in the uncoated places - including under the flat base of the keel (where a Black Widow spider was found on moving the wooden supports!).

Having thoroughly primed the yard workers on the procedure beforehand - and making sure only the most experienced of them was involved - it all went beautifully smoothly, with two on each side (Jorge with Edgar and Pepe with Miguel) and Adriano mixing the batches with me helping.  Ed of 'Panacea' also gave a helping hand - he'll be applying Coppercoat to his boat and was interested to see how it all went.  It certainly created a lot of interest from nearby boat owners, other yard workers and staff of Marina Seca here in San Carlos, Mexico.  The thought of 10-12 years of no antifouling being needed raised a lot of comment!   (Photos below)

In between that and finishing wind generator wiring, I’ve been busily painting the aft cabin bunk tops with a two-part epoxy sealant for protection, the main problem turning out to be the excessively long time taken for each coat to harden, meaning only one coat per day was possible.  I’d naively hoped to get the job completed over last weekend, since the days are still very warm, but it’s only just finishing.   With both sides of seven boards involved the job will have lasted 8 days - hopefully, they can be put back in place this weekend so the aft cabin can be organised and cleared up....

The newly completed wind generator installation has proved useful - in the usual afternoon thermally-induced winds, the rotor is whizzing around so the house batteries are regularly at a healthier voltage now.  (My 220-240V shore charger refuses to accept the high input voltage of 270V coming from the 2:1 transformer resulting from the mains power at 135V here.  I’m often having to borrow 110V equipment to do work via an extension lead in the yard.)

The new hard sprayhood over the companionway (known as a hard ‘dodger' in N.America) is looking good - the shape is identical to my old canvas awning, with Lexan windows.   The glazing sealant gave Jorge quite a problem - it’s silicone and cures to be very strong, but is difficult to apply all around and behind the windows, being runny but skinning over within 20 minutes, giving very little time to smooth it and remove the masking tape around while maintaining the positive pressure on the window for the week it needs to cure.  The stainless steel fixings - front-plates and backing-plates - have given me a lot of work in preparing to instal them, with difficult access to where each of the two backing-plates go.

A Thanksgiving ‘potluck’ Dinner was organised by ‘Shamaness’ here outside the yard last night - it included the traditional turkey and pumpkin pie and I was delighted to find some unexpected fresh-mashed potatoes - a change from tortillas!  Two good guitarists played later and we all relaxed after the day’s boatwork - all very enjoyable! 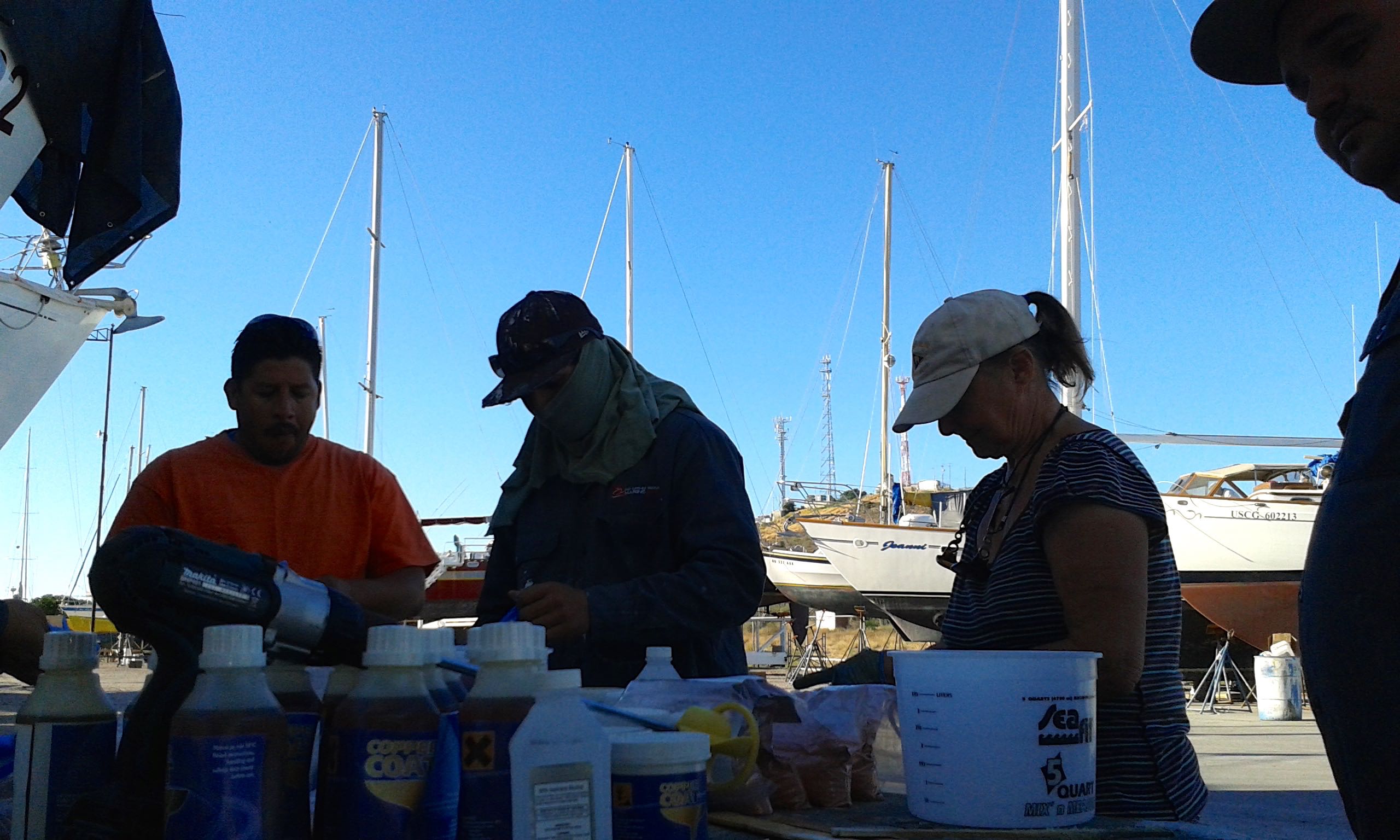 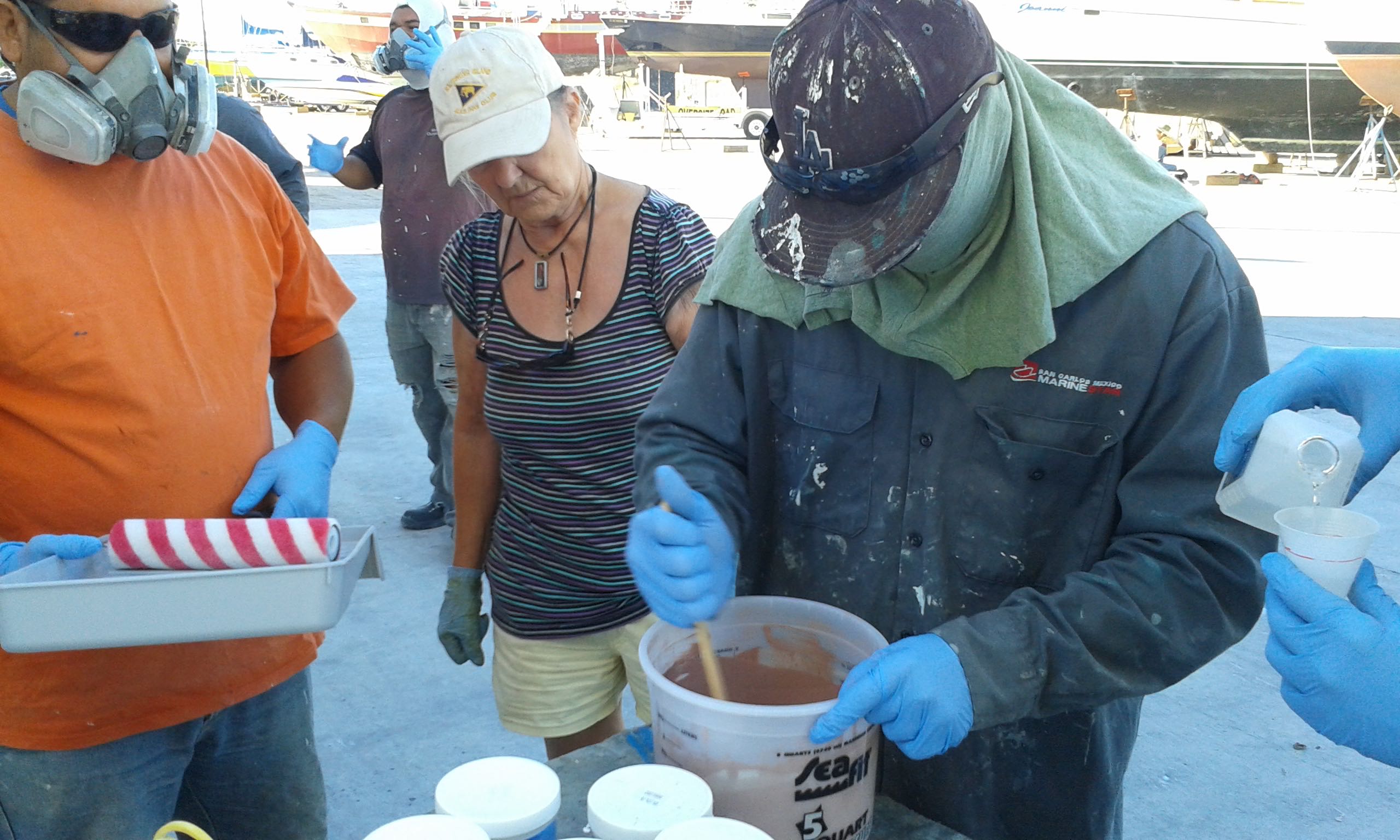 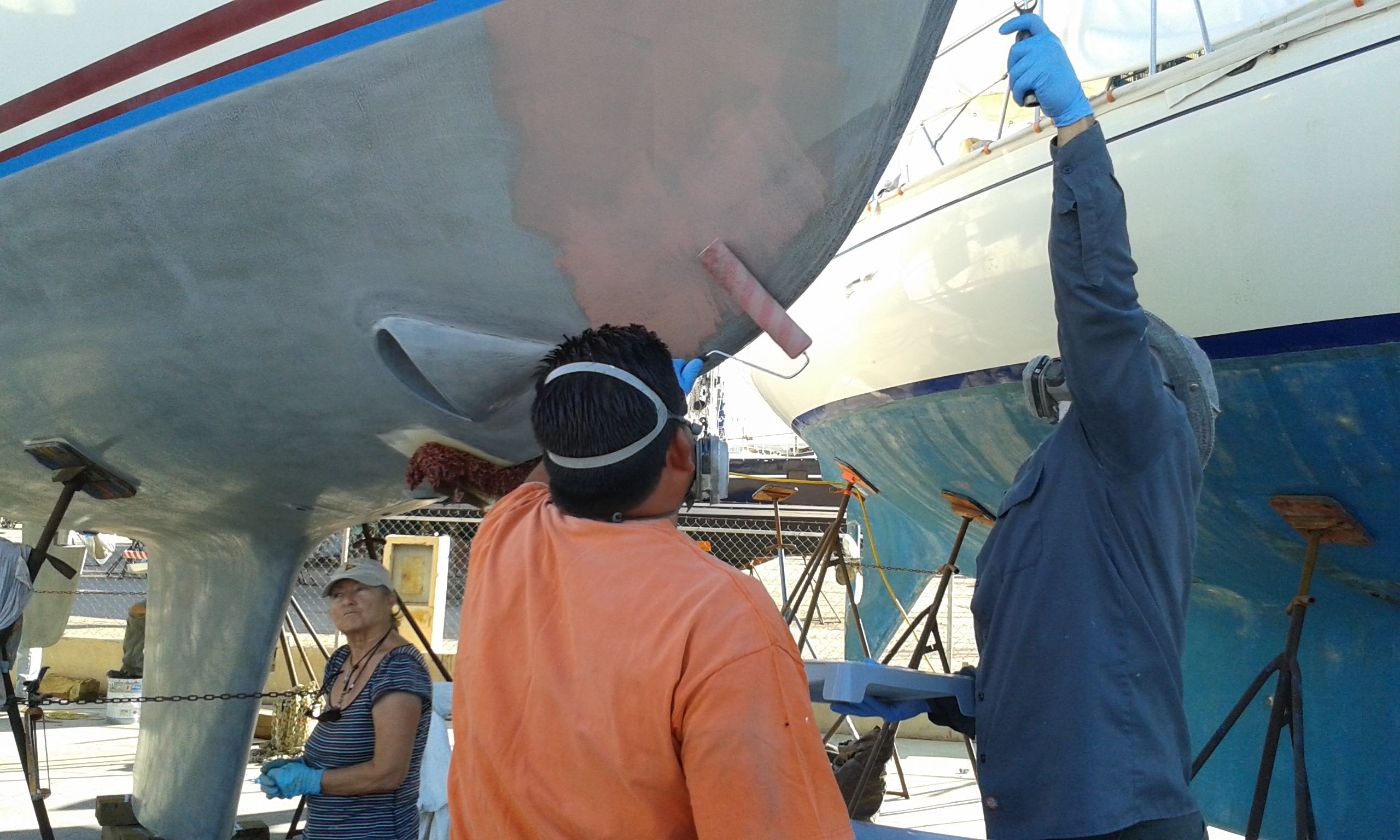 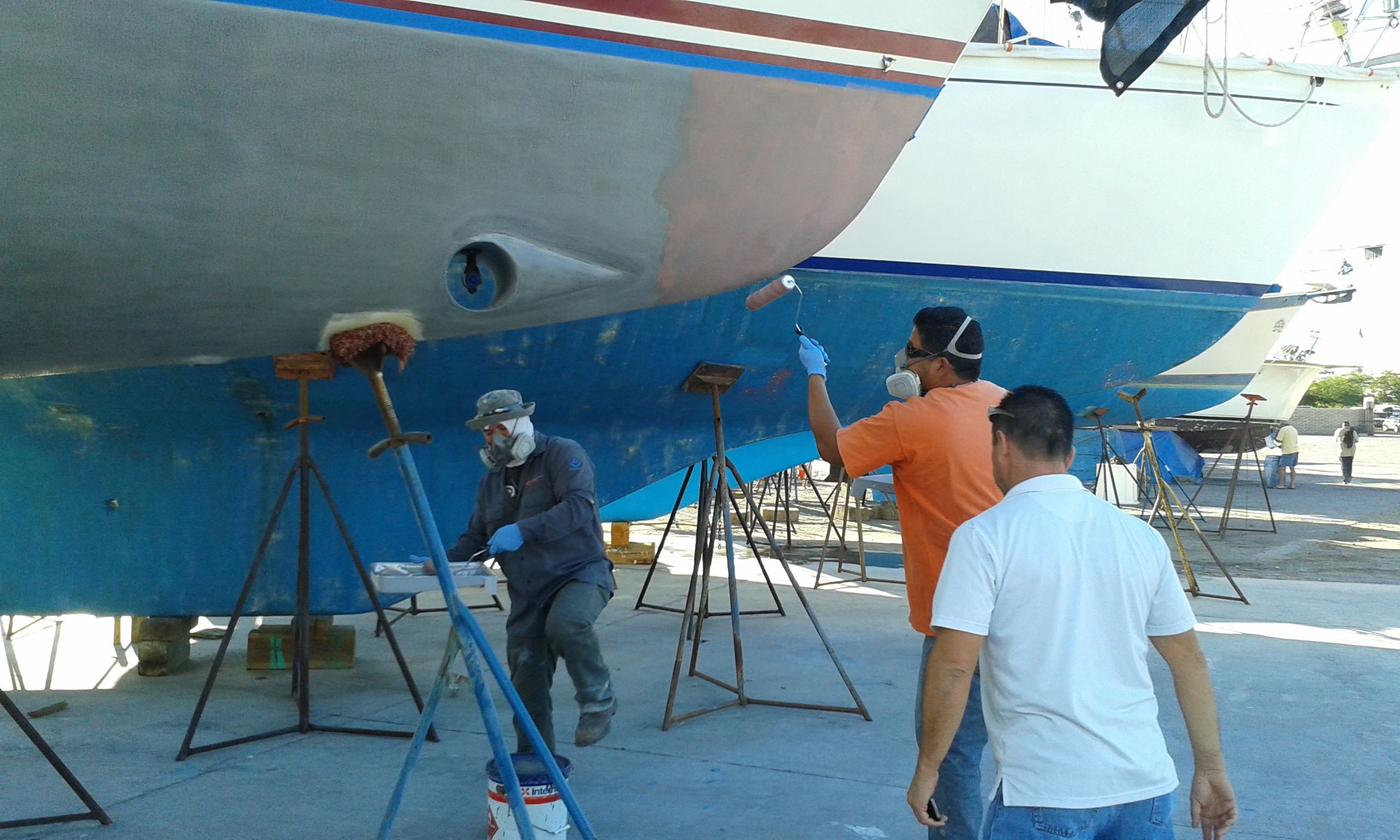 Miguel and Edgar get started : 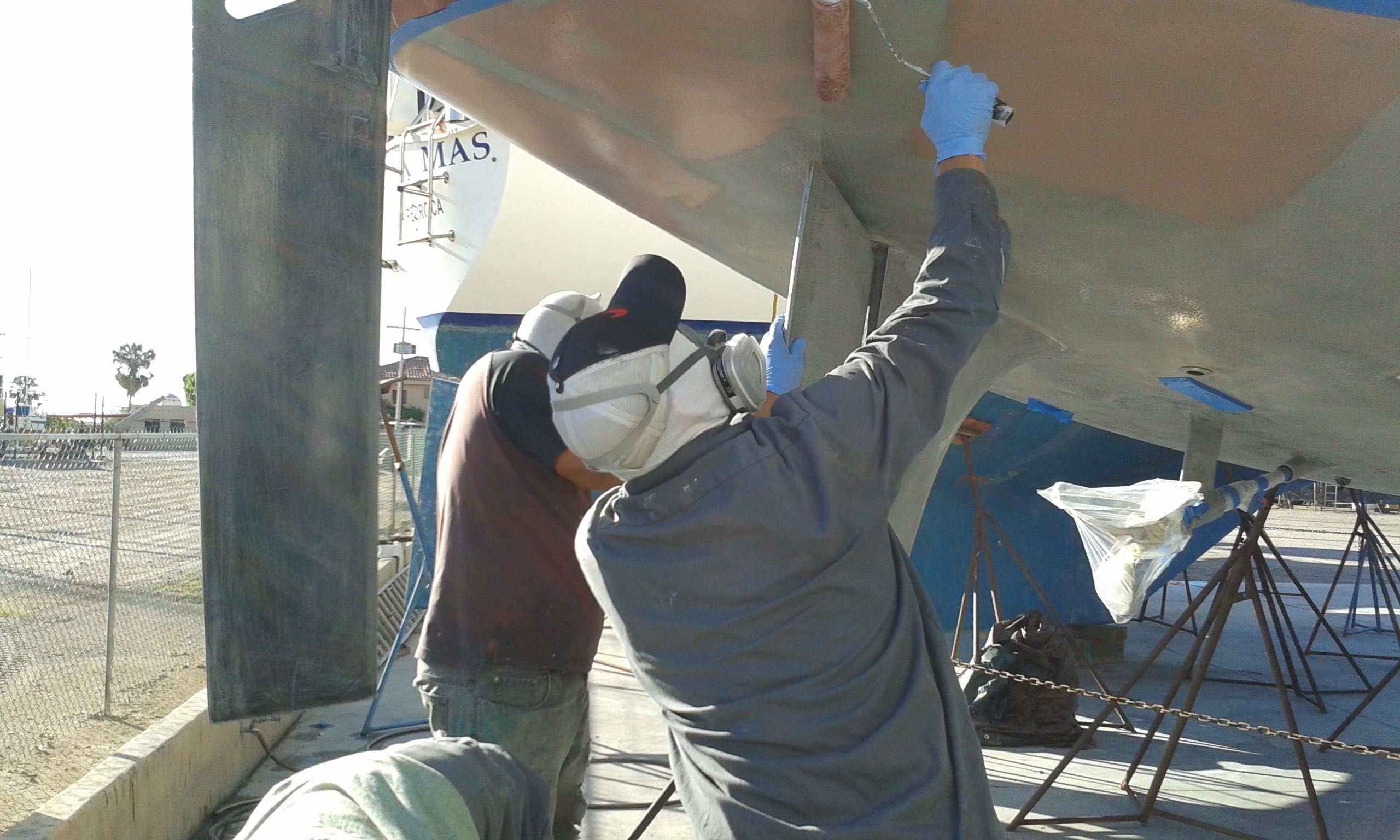 Jorge and Pepe relax in between coats: 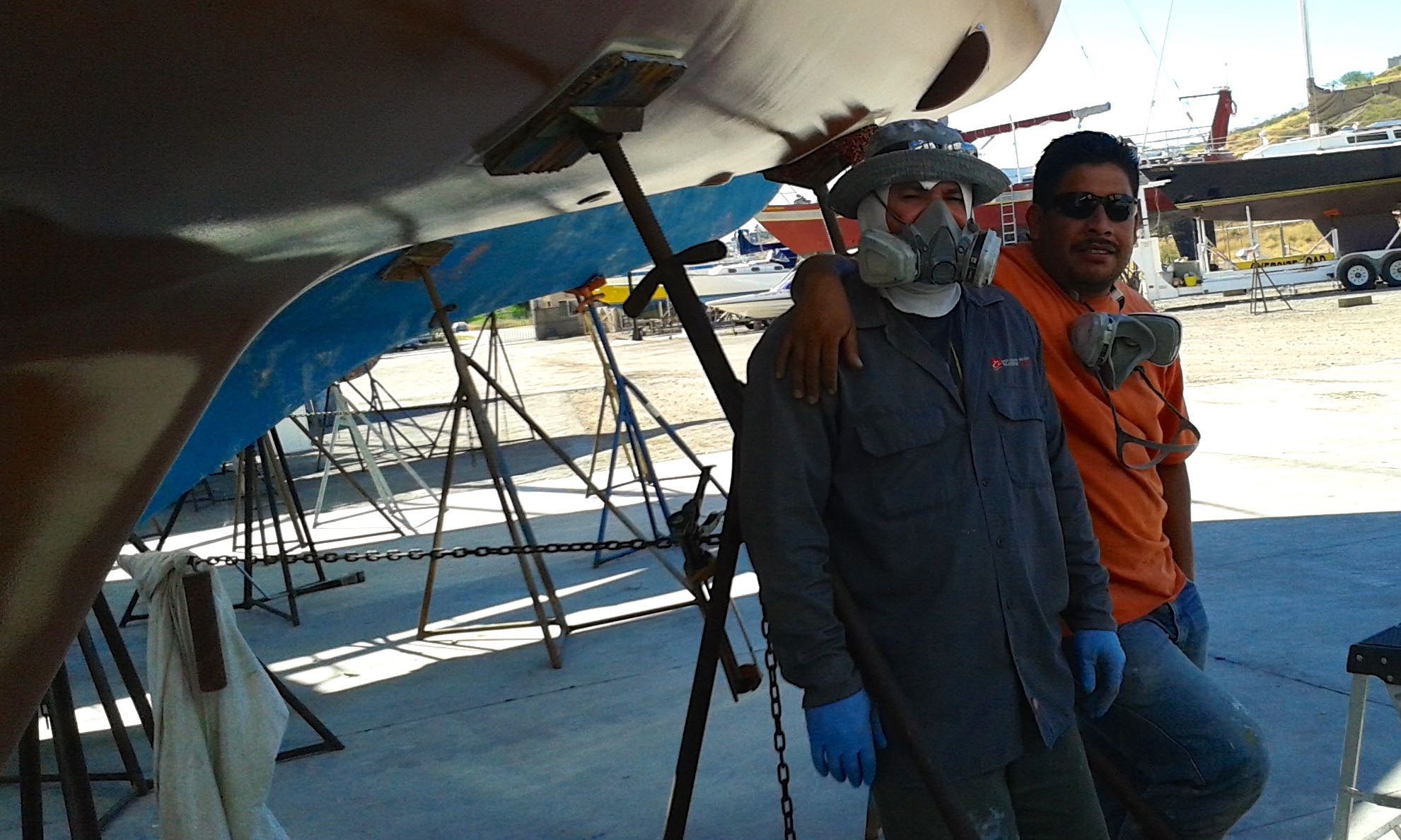 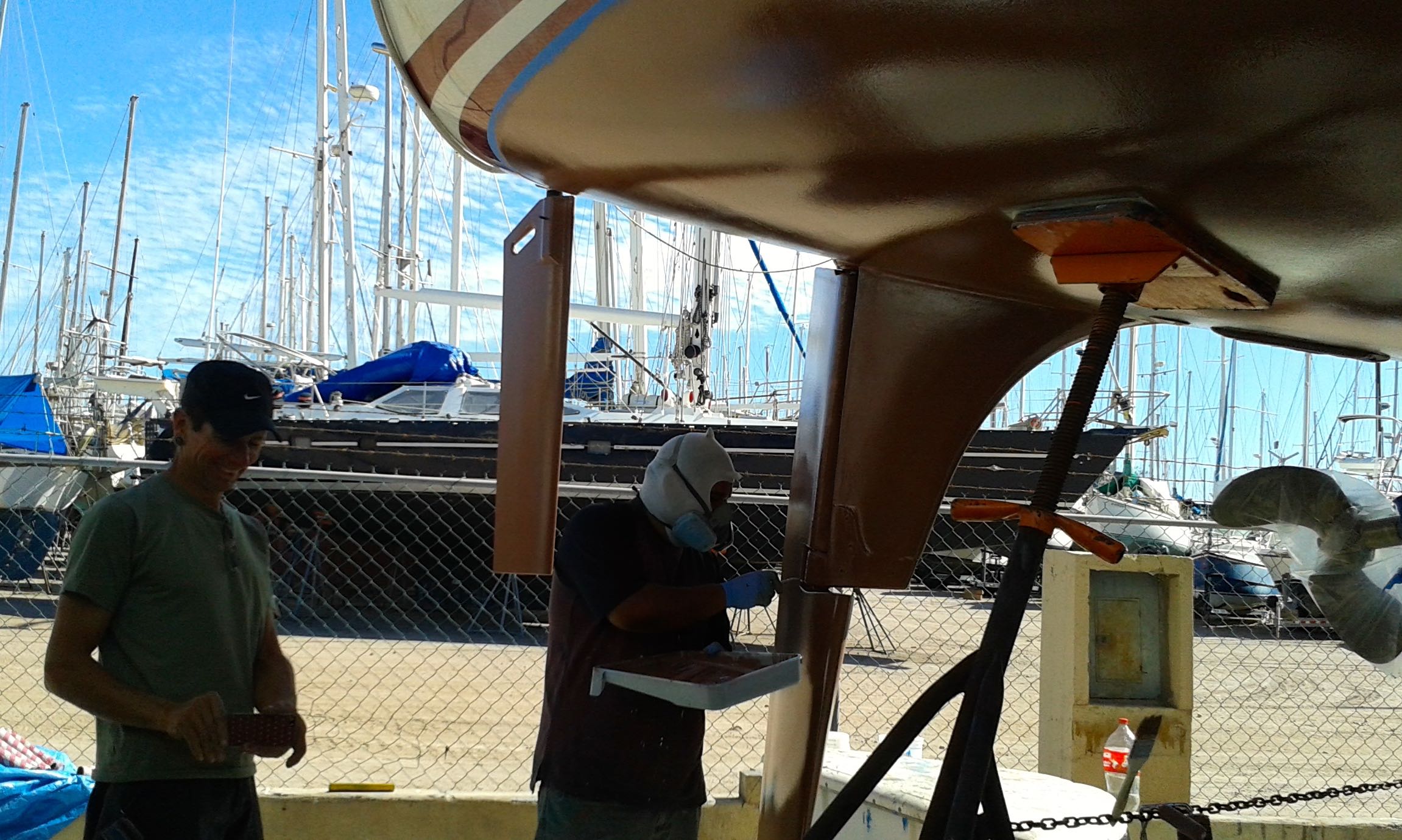 Waiting for the third coat to dry... 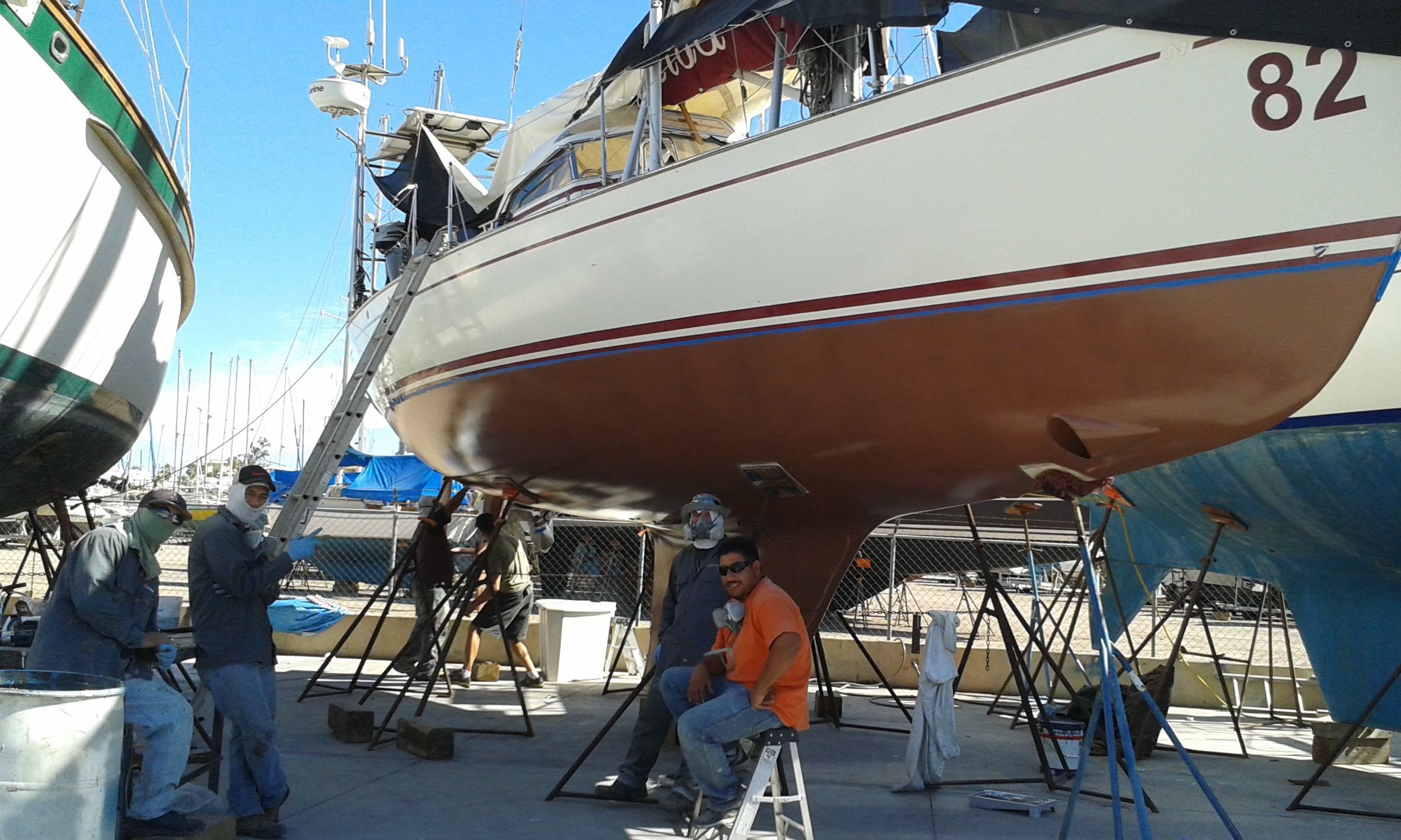 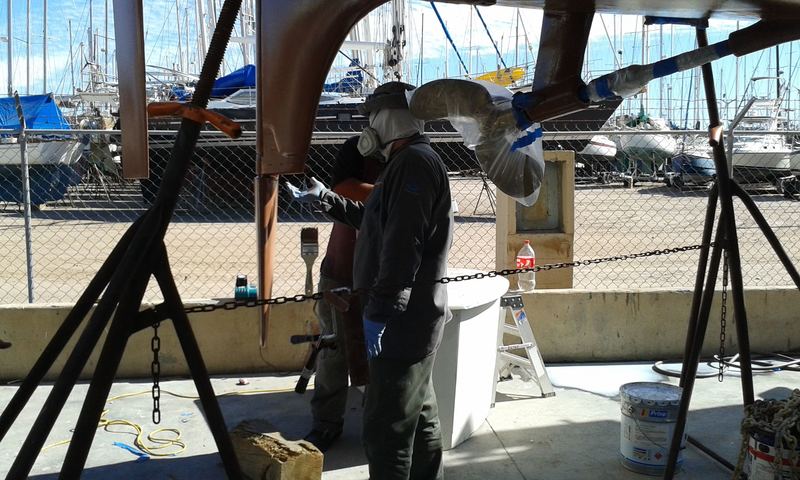 Edgar pays careful attention to the rudder area while Ed checks around the propellor and (rope) Stripper: 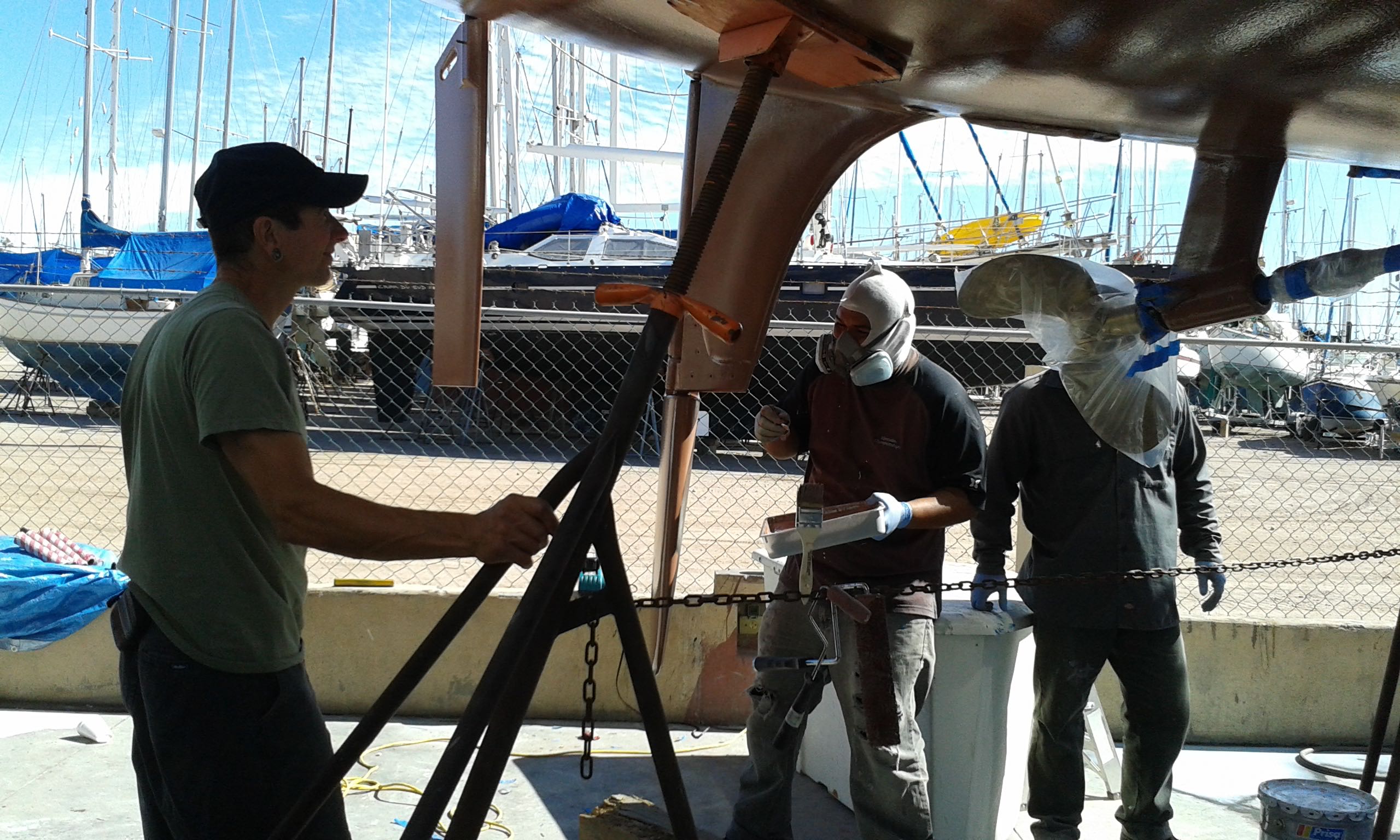 Jorge and Pepe were delighted to have finished all four coats by midday - in time for lunch! 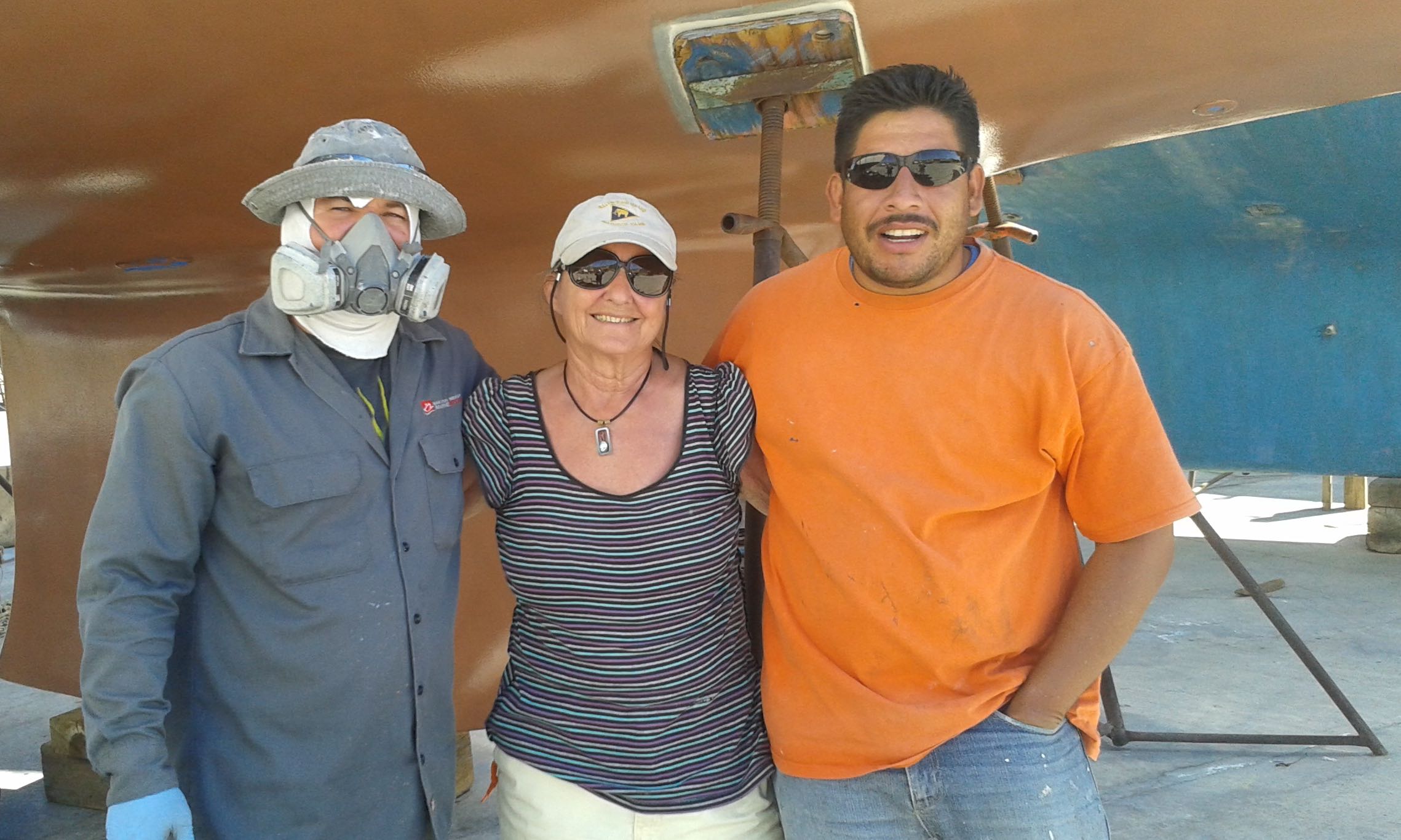 Monday morning, after several days for drying out, the low-loader came to lift 'Nereida' slightly so the blocks beneath, and the side supports, could be moved to complete the coatings: 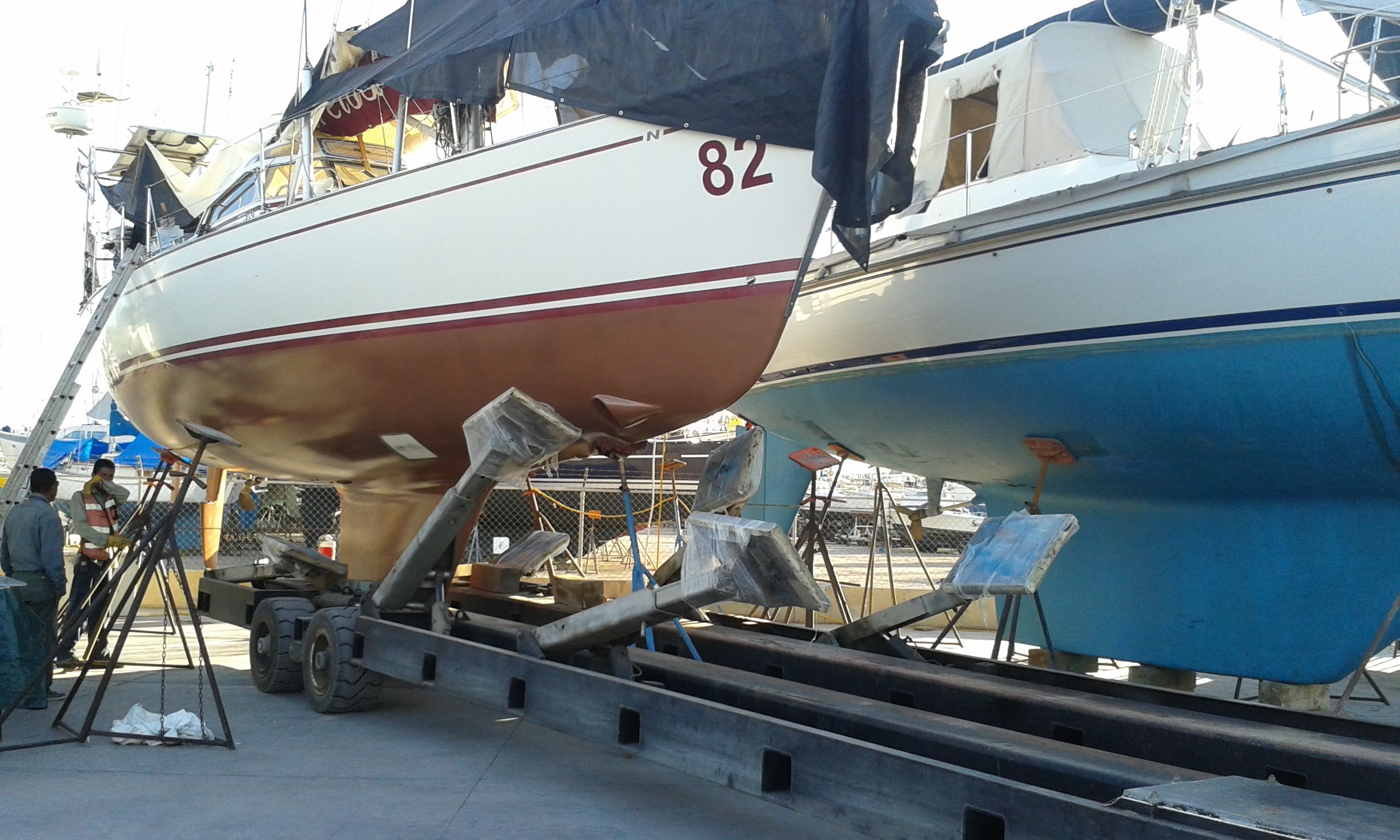 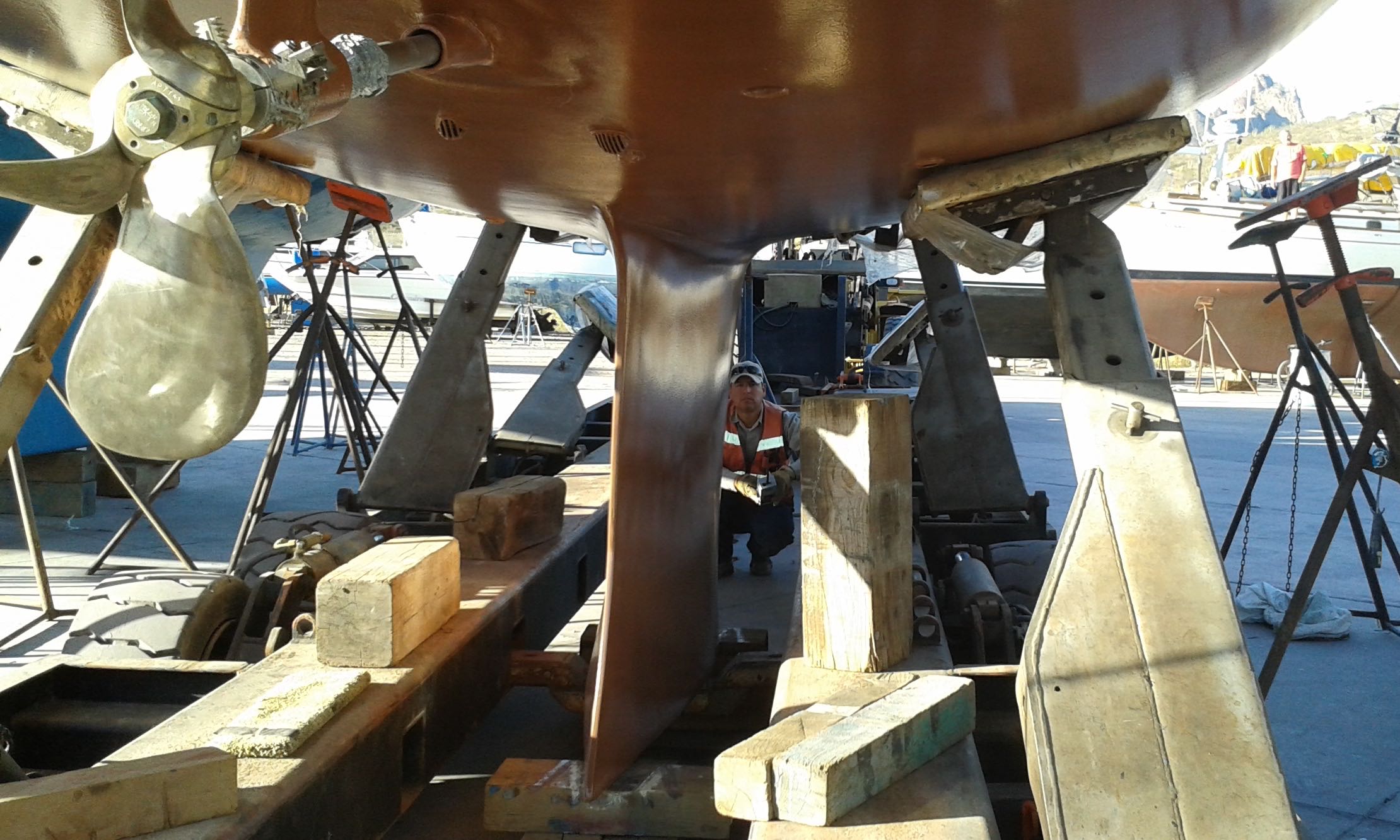 The Autoprop has been thoroughly cleaned off to bare metal, ready for Propspeed coating to be applied - I had been waiting for the greaser nipple and the bearings were thoroughly greased once it came - an easy operation.

A Black Widow spider was found lurking on one of the blocks moved ...! 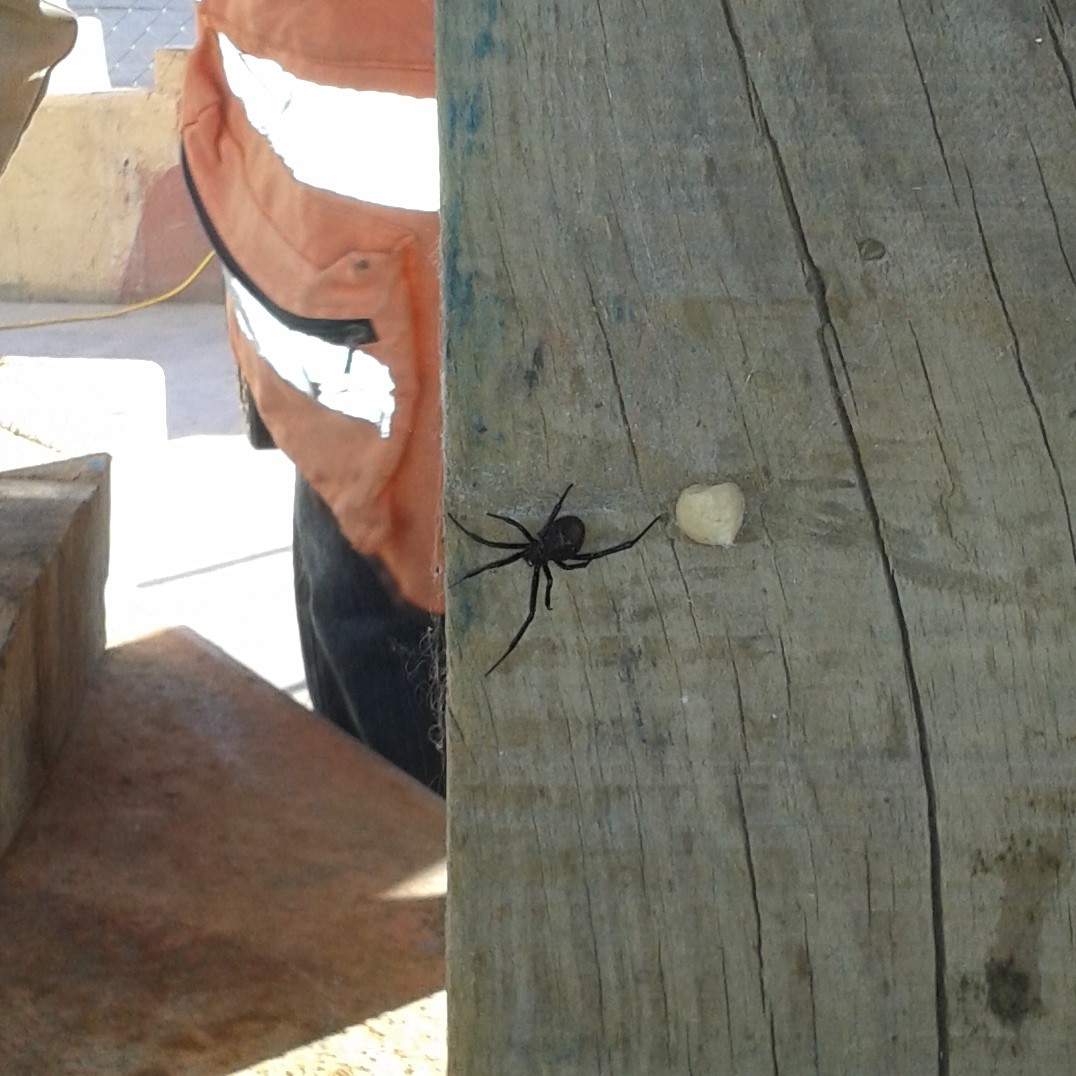