Posting photos of the Antarctic skua that visited 20th March: 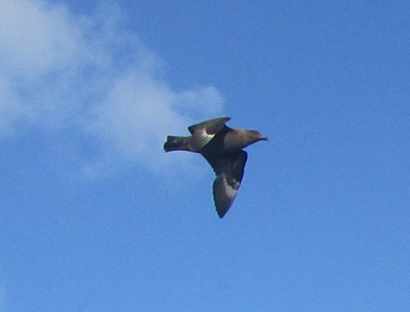 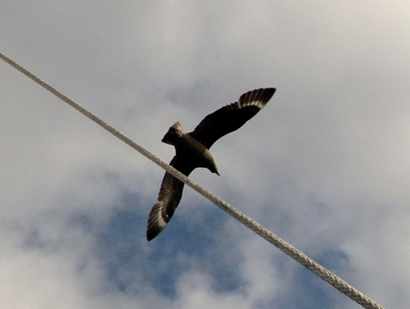 1 pm Gusty conditions for last few hours, after a pleasant, gentle start to the day for a short while, with sunshine in between clouds. But a Cold Front is approaching, so wind has been veering into W-WNW from WSW and we've solid overcast with frequent light rain and gusts giving much increased boat speed, accelerated by frequent slight surfing in 4m swell when the wind is up. In gusts,we're making 6.5kt and in between them, around 5 kt. Had to gybe the mainsland & pole out the stays'l to go goosewinged - almost DDW (dead downwind).
Have downloaded usual set of weatherfaxes - quite a few! - and emails + gribs, in between.

Evening Went to cook a meal - gas just ran out... So have to find my small camping stove if I want even a hot drink. Hopefully, seas will calm down sometime tomorrow so I can change the gas over and make something hot. Sea temp is still around 15C and boat cools to same temp at night - so bunk (cold and damp initially, but nice once it warms up ) is the place to get to now - after a meal - something quick and easy...!
Had several radio chat sessions, with mainly Aussie stns earlier and then US later, but S. Africa seems to have become too far. Despite the weekend 'CQ Contest', which made just about all bands impossible at times, we were fairly lucky tonight - Eric and Mark managed to keep a lot of people away from close to our frequency - hard work, though! It should be nice and peaceful tomorrow, without all the noise they've been making....
An uncomfortable, rough, rolly ride just now - and has been since midday, with frequent surfing to 12-15kt in increased seas... I've constantly found myself watching the instruments... Forecast is for both seas and wind to die down slowly from their present 4-5m and gusting over 25kt, as High pressure to the N moves nearer and the pressure gradient drops..
The only bird seen today has been our constant companion of the last four days - the white-headed petrel.