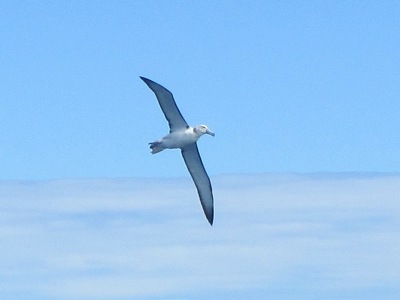 Midday: Dull, overcast, chilly, occasional slight rain.... Heavy condensation on windward ports again - humidity is 84% and cabin temp is 14C . Had hoped, with High approaching, to get some sunny weather - but not as yet. Still using my small camping stove to boil water for drinks and dehydrated meals - seas still well up, around 4.5m so no rush to change over tank supplying galley. Looks as though seas might not lie down significantly until very late tomorrow.... and with them coming from just abaft the beam, it's very rolly.
From latest weather info, still looking as though High will give calms followed by NNE winds, as I approach S.E. Cape of Tasmania - not at all helpful for my proposed stop to effect repairs etc..

Later, some sunshine through breaks in the cloud. Very few birds ..... a prion, ... a soft-plumaged petrel,... an albatross - one of the smaller ones - thick black edges to its underwings and white head with black patch over eyes - an immature black-browed - bill not yet the bright yellow of the mature birds - quite dull, in fact. Seas up, if anything - long and big, 11 second period, with wind waves and chop on top of the underlying swell.

Sunset: A pair of black and white storm petrels dancing over the water, long legs dangling, fluttering fast around and around the last of the daylight... Further away, a sooty shearwater, all dark , except for the light area on its underwings which seem to catch the light. Tried to take some photos but the storm petrels move so fast... so difficult!

I'm enjoying my regular radio chats over the day ... usually with Aussie and US stations, but tonight had unexpected contact with a S.African stn (presently in Mozambique) who I'd last spoken to about 3wks ago.

Although we made a good distance up to 1100 GMT today, that's clearly not going to continue - that High pressure is slowly making itself felt with lighter wind - we were down to under 4 knots for a time tonight and, typically,the SSW wind is gusting up and down a bit, while it gradually lessens. I'll not be surprised to find us becalmed quite soon - but that might have a benefit in that maybe the seas willl die down enough for me to fix that wind steering rudder in place - time will tell!