Generator is back in action!

10am Looked at onward route after morning radio contacts with Tony's Net (NZ/Aus) and Taupo Maritime Radio (NZ). We're due W of the S coast of the southernmost of Fiji's two big islands, Viti Levu - it's showing up clearly in the right-hand side of my AIS screen. Course has now been changed to 036T which will pass W of Viwa reef and island, 80ml away and well offshore from the outer reef islands of Viti Levu. Then, if winds permit, we'll try to head NE towards the Equator and then, on reaching the NE Trades, we'll head N, passing well W of Kauai, Hawaii on our way to the Strait of Juan de Fuca around the N. Pacific High pressure area. When I post my daily 1100GMT position and weather report, I'll download a set of grib files showing weather systems over next 4 days from here all the way N to the so-called 'Pacific NW' of N.America - will show me where the ITCZ is active & where the N. Pacific High is, to help with passage-planning. I'll be repeating that regularly over the next few weeks.

Sunny again , with a few clouds, swell still up around 3m but 8-10 sec apart and wind SSE at ~12kt - very pleasant sailing - goosewinged with genoa still poled out. Solar panels putting in over 12A at midday.

Back to generator repair after late breakfast which I enjoyed seated in shade in cockpit - will be doing that a lot more often from now on, I think. Was recollecting my stop in Fiji in 2007, as part of my first 'cruising-style, stop-everywhere', W-about circumnavigation... Customs & Immigration clearance at Lautoka, where photo of Queen Elizabeth was hanging in pride of place on the wall above the friendly officials, the anchored boat being smothered in black specks from burning off the sugar cane left after processing in the nearby plant, amazingly low costs at an Internet cafe in town, where Skype callers were provided with headphones free of charge, a group of Fijian Indians who went to a lot of trouble for me & were so very helpful in repairing my misbehaving outboard engine... and picking up a fast-breeding collection of minute ants who came on board via the dock- lines at Vuda Pt marina where I'd gone to wash down the boat before leaving Fiji for Vanuatu, en route to Queensland, Australia. Their nest took an age to track down and eliminate (found in the chain locker finally) - they were almost impossible to get rid of.

1:30pm Thought I'd unfurl stays'l, even though we're on a broad reach, in the hope it might boost our speed a little - was very pleased I went to do so - the block holding the outboard of the two stays'l sheets was disconnected - the shackle and pin that should have been holding it down were lying loose on the side deck close by... just seen in time. The cable tie I'd used to secure the pin was broken. Knowing the stresses it undergoes regularly when I tug on the sheet to bring the block inboard, instead of dangling outboard over the cleat its attached to, as it often does, I wasn't too surprised. The shackle pin has now been 'moused' with wire, so should last fine. Not sure the stays'l is adding much, if anything, to our speed, but with SOG of 3.9kt or less, I'm leaving it out, just in case... Back to the genset repair...

8pm Just tested newly-repaired generator - all working fine... no leaks or flooding of engine compartment! Was pleased to find that removing the seawater pump , involving releasing hose clamps and pulling off rubber hoses from metal pipes, was not as difficult as I'd feared - using a little PTFE grease on outside of pipes helped replacing of hoses later. Made sure belt tension was OK when bolted pump back into place - access to nuts was difficult but luckily had useful extension pieces for socket tool which helped. Was very slow and careful when opening seacock and released cover to seawater filter to allow water into pipework before running genset - pump isn't meant to be run dry. The impeller was completely gone - see photo.... 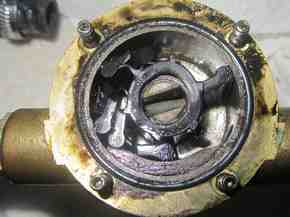 3am Having a bit of a nightmare - wind has died almost completely so we're struggling at 1-2kt to maintain a course well off the Fiji NW reef area 35 ml away - and the reef and island of Viwa - just 24 ml to NE.... Have been sitting helming for quite a time after initially finding us with backed mains'l heading W instead of NNE. Now using autopilot to keep wheel turned appropriately to keep us away from danger, with plotter usefully showing our track, SOG and COG clearly. Pity - I'd been enjoying the cool, starry night from the cockpit before turning in to my bunk earlier - or that was the plan... Now I'll have to stay up to make sure we're OK - if the wind would come up a bit more, we could sail with better steerage and I wouldn't have to make continual adjustments. It's going to be a long night...
Running the genset to charge batteries and inverter for laptop - sounding sweet!

My friends on way to Tahiti from NZ are fine. Soon after I'd spoken to them yesterday, the wind died right down and they got sailing - and have had no problem since.... Excellent news!