Saturday 5th August 2017 - Full sail and good speed - for a time.....! Grey overcast all day today with a couple of small breaks in the cloud showing blue sky near sunset.q Came across a couple of small, commercial, white fishing boats this morning. Difficult to see them against the grey sky and sea - first one was quite close before I spotted it and the other came up at speed soon after. They probably saw Nereida on their AIS but they were not transmitting so I was not aware of them until we were close. Being well offshore, over 60 miles, they would be on the lookout for big ships while fishing so unlikely not to be equipped with an AIS receiver for their own safety. 3.30 p.m. Wind has died and veered again - down to 6 kt and more northerly. With full sail earlier, including staysail, I was very happy to see our speed up around 6 kt for quite a time, close hauled in wind of 10 kt from W-WNW - a vast improvement on the dismally slow speeds of yesterday, albeit with motor still helping to give a good apparent wind. If wind dies any more, I'll have to furl in the genoa and motor upwind to maintain best course.... Might do that anyway - all depends on how well the genoa will hold the wind - presently heading 20 degrees off course to maintain better speed - I don't want to keep on this course for too long. If I had all the time in the world, it would be easy - just drift around, tacking and making best northerly course possible under sail alone. But I'm well behind in my timing to have boat ready for Sept, having expected to get to B.C. by mid-July, if not earlier, so I want to push on north as fast as possible, making good use of this unusually benign weather window. Presently 60 ml W of Cape Meares and Cape Lookout, not far S of Tillamook, and 180 ml from C. Flattery. Experimented..... With headsail furled in and on course: speed (SOG) ~4.3kt. By heading a massive 60 degrees off to starboard of our rhumbline course, SOG finally reached 5kt - but the unfurled genoa was still not filling properly (wind had dropped to 4kt) - mainsail was doing the work. So genoa was furled in and we got back on course. Looking at new weather files, the two are more in agreement for wind from here to Cape Flattery - light NNW now until Sun afternoon, then 10-12 kt or so, NW becoming NNW, until after midnight, getting lighter from W until midday Mon, strengthening from W over Mon afternoon. To take advantage of the increased wind expected from NW-NNW over Sun/Mon, by getting a better angle to sail, given that wind direction, I've changed our course to just W of N for half the distance. (Adding just 5miles to our theoretical total .... 178 ml instead of 173 ml). All subject to change, of course! 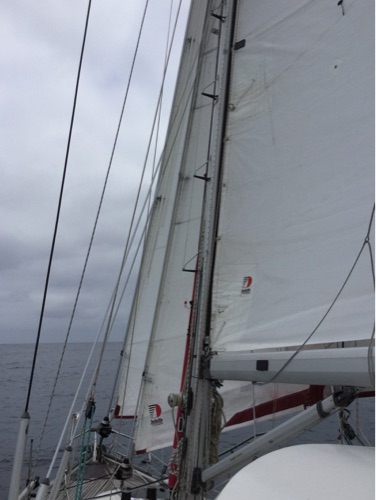