Good sailing overnight at over 6 knots consistently, with mainly clear skies until before dawn, when the entire sky became overcast and it became grey & rainy. No sooner had I finished a regular 9am radio 'sched' with 'Charisma' and got up on deck than I saw the wind increasing & tied in 2nd reef just before it got over 20knots, with some rain ... The ESE 20 kt wind continued on over the morning, finally reducing to 16kt mid-afternoon by which time the 90% cloudcover was light and broken. The wind has stayed ESE so we're still able to keep, or slightly improve on, our Easting.

We're definitely into the ITCZ now - satpics showed me that we were no longer headed into a nice gap - but straight into a big clump of cloud! I'm hoping for no big squalls in it. We'll take 2-3 days to get through this cloudy area, unless it decides to dissipate or move away.

Thre's an E-flowing Equatorial current now - quite strong, so helping us to stay East. 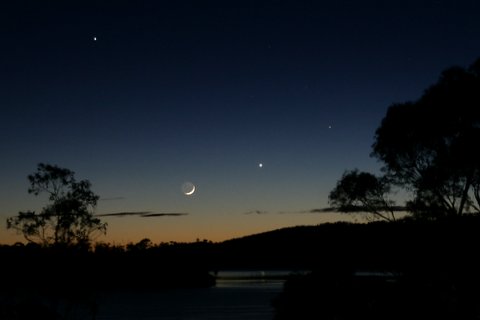 Hopefully, you'll see here the photo a friend in Tasmania sent me when I commented on the dawn sky and two possible planets in the E. John, VK7ZZ, happened to take this shot from his back door, overlooking the Derwent River, just S of Hobart, a few days before my comment - hence the waning crescent moon is also in the picture, whereas it was newly-appearing in the W at sunset the night before I saw the two planets at dawn -they're Venus and Jupiter, I'm told, Venus being the lower of the two and Aldebaran (in Taurus) is also in the shot, to the right.