Tuesday A dull, grey, rainy day - even a hint of fog later on towards nightfall. But wind came up again, so good speed, around 6kt, was being made, despite only genoa.

8pm Had a nice chat with Uku - propagation was in our favour, for a change! He's finally got to the Trade Winds so a lot happier to be sailing well after several days in a 'wind hole' in the High pressure area (St Helena High)

Wednesday 2pm Continued to be grey and rainy until mid-morning, but then the wind dropped and backed into W so our course described a nice arc of a circle, ending up totally off course (NE!). Had to gybe onto starboard in order to make course toward Gough Island, 210 ml SSE of Tristan da Cunha. It's on our route anyway, so seems a pity to miss seeing it again, if weather permits. Its birdlife is spectacular and the rock formations and steep cliffs around its coast are amazing - it's a truly isolated, uninhabited, green wilderness in the middle of the S.Atlantic Ocean. Last time I was there, adrift while taking in the surroundings and birdlife, a Tristan albatross rested in the sea close by, gazing at me and wondering what we were doing there...!

Only making 4.2kt just now and the sun is struggling, mostly unsuccessfully, to get out from behind a thin white cloud layer. After all the overnight rain, the mainsail is soaking wet - no chance to stick anything by way of repair tape on it just now - it needs to dry thoroughly first. Not an easy thing to achieve but working on ways and means... Thanks to those of you who have made some useful suggestions.

4pm Went up on deck to check on weather - but saw a bird resting in the water, drifting by - rushed to get my camera - none of the shots I took were any good (but best of a bad bunch is shown here!) Looked like a Great Shearwater relaxing.

Sky is mostly cloudy and there are definite patches of rain around and a big area of rain astern - so no point to even thinking about dealing with the mainsail repair just yet.
Cooking a soup - lentils with ham - a change from green pea soup. Will add in to it so it makes a few easy meals.
Wind is really down - well under 10kt - and from astern so speed is down to 3-3.5kt. 24hr DMG won't be breaking any records today or tomorrow!

Photo of moon just before totality during lunar eclipse two days ago - 'upside down' compared to view from Northern hemisphere! 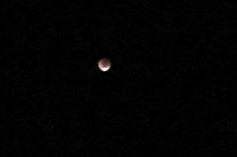 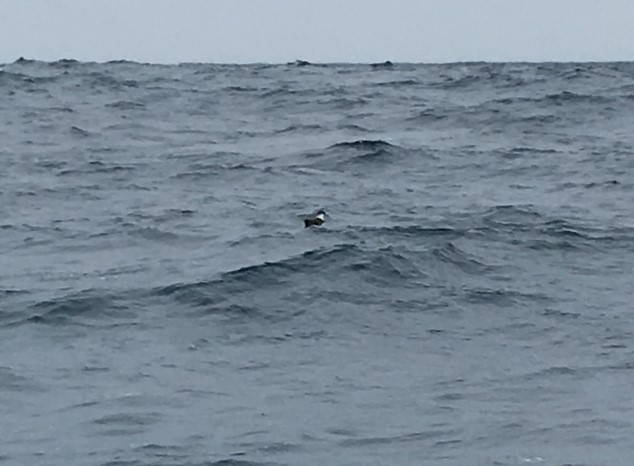