Friday 9pm Seas about 4.5m/14.5ft and wind around 30kt - strong, very rough conditions but effect of big waves is lessened by running off more downwind. putting the seas more astern - otherwise, we were being threatened with being knocked over by the tumbling crests hitting us on the beam.

Saturday 2:15am The Cold Front has passed over....pressure up, noise down! Wind has died down somewhat and our speed is down to 4.8kt, compared with our earlier 6.8kt, making 8-9kt as waves picked us up. Wind is beginning to back. I was able to change our course to ENE - the waves were no longer threatening to knock us over when headed that way.

3:20am Speed down to 4.2 kt in a light W wind, expected to back and die further. We'd made 45 miles in the seven and a half hours the very strong conditions had lasted, giving an average speed of 6kt while running downwind under staysail and trysail - I was surprised at the jump in speed (and comfort) when we started downwind compared with being on a beam reach in those big seas.

I'd had a short rest before the usual 'late shift' radio sked at 3am - if propagation weren't so very good at this time, I'd cancel it in favour of more sleep! Was great to make contact again with Montreal, Ottowa and Newfoundland, as well as the usual US stations and some S. American and S.African ones.

7am Up on deck at 5:45am to deal with sails after wind died down completely to under 10kt and backed all the way around to SSW from NW. Had to gybe the sails and change course to head more East again - back on course, but very slow sailing in the light wind from well abaft the beam. Seas are still well up at ~4m but they are well-spaced. Will unfurl the genoa to speed us up but wind is forecast to die even more soon, as we come into yet another High pressure area behind the Low that just passed over and before the next Low on its way... "From feast to famine"...! (Hopefully, back to 'feast' on Sunday)

Very grey sky and we clearly had overnight rain. Had to retrieve the loose ends of a few lines on the starboard side which had been washed overboard by the rough seas.

I thought Iwe were going to get in a good distance with last night's winds when we were often making 6.5-7 kt - but have only made 57 miles since 7pm/1900Z last night and we shan't make very many more with today's very light winds - and even possible head-winds.

8:15am Finished unfurling genoa and furling staysail - speed slightly up but not much in such light wind.. Wind expected to back further - to SE and E, and become even lighter at 2-4kt... So not much progress will be made today. Back to my bunk for a bit more sleep before breakfast. The sun isn't managing to shine through the overcast sky - maybe it will later.

The cockpit is a mess of wet lines after the rough seas of last night - will take some sorting out!

8:40am Just spotted a ship heading W - at 39S. It's likely that W-going ships are further N than E-going ships - so they pass each other the standard way - 'port-to-port'.

Midday Just got us moving in roughly a NE direction after drifting in a circle in almost no wind - and shifty at that! At speed of 1.0kt or less, difficult to hold any course. Tidied up lines in cockpit - all soaking wet - no sun - total cloud layer.

Swell still big at around 3.5m - coming from both N and W, but well-spaced ... Rolling about a lot, though. Air feels damp - even my bedding felt damp when I got into my bunk earlier this morning. Tidied up in cabin also - a lot of small items ended up on cabin sole in the rough seas last night. About to put on a pot of fresh coffee - have been missing that. Will need to stay close by to make sure it doesn't spill when it finishes percolating - that would be very upsetting!

3:30pm A very relaxing day, in a way. Hardly any wind so not much I can do other than try to keep a vaguely E-going course in an unhelpful wind direction and strength. Presently, judging by the ripples on the water surface, it looks as though the wind is coming from S - but so light, we're lucky to make any Easting at all. COG at this moment is 037T - almost NE, which is pretty good, considering... Since I can't do anything about it, I refuse to get too stressed out by our speed - a consistent 0.7kt, occasionally making 1.2kt!!! At least we're going E-ish....
Eventually, we'll get NNW wind - but not for a while. Seas are slowly diminishing but it's still very rolly. No sunshine - total cloud overhead, so nothing is drying out very much.

Been busy clearing up & sorting out... Checked my sail-sewing items - all there, waiting for the moment... Have needles, palm, thread & whipping twine and enough sail material to use for 'tabling' once extra Gorilla tape has been added at right angles to leech edge and beyond the present repair. Sail is too wet just now to do anything - and it would be too rolly to work, perched up at the boom, anyway.

Grey sky all day long but seas have calmed down a lot - we're mostly rocking/bouncing gently all the time, with occasional stronger motion, aimed at testing my handholds... Air temperature is around 20C - so not feeling too cold at all. Better than Montreal's -20C that I heard of.

7pm Nice to see a pair of both albatross and white-chinned petrels just now. Birds have been absent almost all the day but now the wind is increasing a little, they're back, just around sunset - daylight is fading now and clouds are looking very grey, as though it might rain. The albatrosses are either Atlantic Yellow-nosed or Grey-headed - my inclination is to Atlantic Yellow-nosed from underwing markings and dark patch in front of eye. 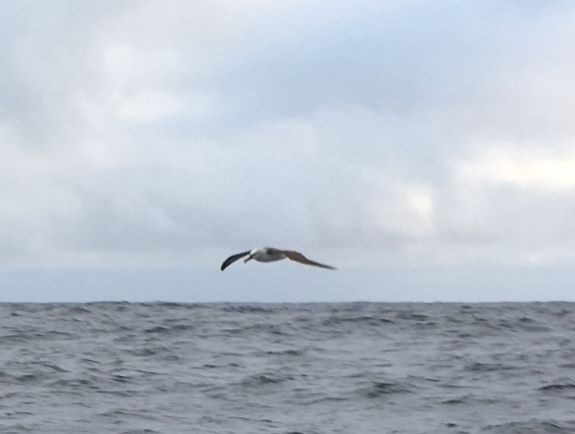 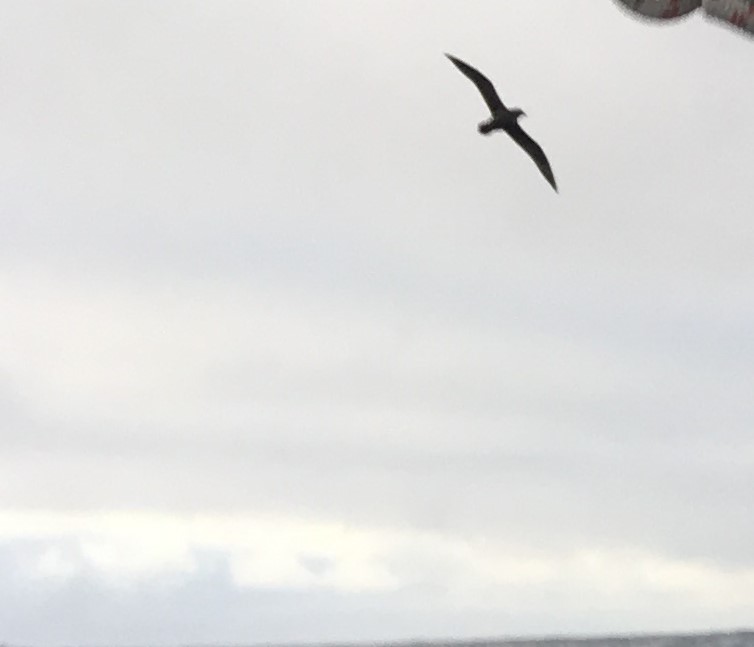 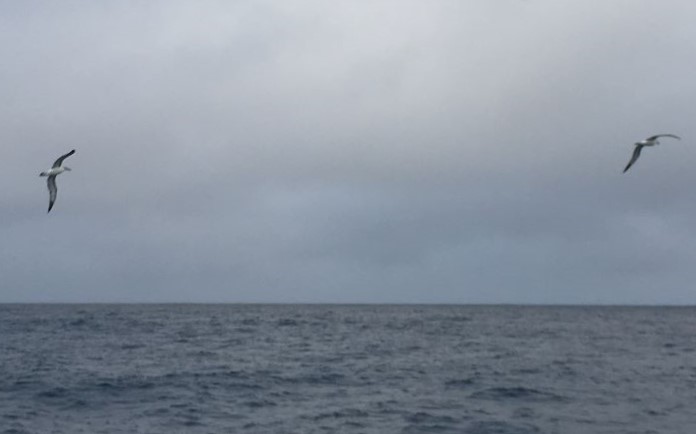