Tuesday 8pm Finally making a good course - roughly SE at 4kt - in NE wind of about 12-15kt perhaps? Total grey cloud cover at sunset - feeling quite cool, with air at round 16C/61F - there was no sight of sun all day long. Waiting to see if I can contact Tapio on 40m, since either 20m didn't work or he was too busy on deck to answer my calls. He's very close to rounding Cape Horn now.

11:45pm Well, we're either heading SE or SSE at 3-4 kt - so I shouldn't complain, I suppose - we're going in the right direction and that's what matters. The wind is light but we're still making a fair, if not impressive, speed... Pressure is still high, at 1023 hPa, so we're still well within the High pressure region. To my bunk for some sleep... with alarm set!

Wednesday 3:40am Just finished a session on radio - middle of the night but wanted to check on our course anyway, so that's good! Gather Trump giving State of Union address now, so not too many US stations on frequency tonight. Was expecting to have to adjust Fred to bear away off the wind a little, to make SE course again, but wind obviously shifting around a bit just now and did not need to touch Fred, in fact, since wind veered back again to put us on course. Making 3-4 kt, but both speed and direction are varying. Back for some more sleep again - alarm set each time, for sure! Can't wait too long in between checking on how we're doing.

4:15am - First light, before dawn... all very grey.. Heard a lot of noise in water around boat while I was in my bunk- whale or pod of dolphins?? Lasted for quite a time.

7am Sent in usual morning weather/position report. Light grey cloud cover. Sailing well and making 5kt on SE course.
Could hear Tapio on frequency but not able to make contact - I think earlier would be better for propagation on 40m than now. He should be rounding Cape Horn today - hope he's in luck with the weather!

5:30pm Another example of 'Manana' not working on a boat... Another shackle lost overboard after its pin obviously came loose and came out - again, on a running backstay block - this time the starboard one. I thought I'd 'moused' it to prevent that happening - certainly I'd intended doing so but must not have done - must have been busy with something else and it got overlooked - so now I just hope I have a suitable replacement - it's an important item. I checked the shackle on the port side - its pin is being held in place fine. Just as well since it's in use now, in strong conditions!

Light rain with slight mist and reduced visibilty. Wind got up to well over 20kt some time ago. We were making over 7kt at times with full genoa - way too much canvas, causing us to heel a lot, especially when waves hit. Reduced the genoa by furling some in - we were still going at a fair speed. Should have left it at that but was worried wind was forecast to increase further so furled in more genoa - and then decided to go with just the staysail. That cut our speed way down so was clearly was not the right thing to do.
I was going to live with it, but finally, seeing our really poor speed, I went up and unfurled some of the genoa - enough to give us 4.5-5 kt of speed - an improvement! Light is fading and wind is set to back and increase a bit more overnight but hopefully not too much for the amount of sail now out.

Looking at the weather well ahead, there's forecast to be a nasty system close to S. Africa as we're due to pass into the Indian Ocean which is expected to be giving very big seas much further N than usual. I have been heading SE because it looked like a good thing to do - to keep fair wind when in or near the Highs coming up soon. But the forecast has now changed and heading further S no longer looks like a good idea - so I'm slowly heading back up towards 40S and perhaps even further N, nearer 39S, ready for when that system passes by. It's quite a long way ahead but I don't want to be in such big seas with strong wind if they're avoidable. I'll be keeping an eye on forecasts in the meantime, of course - the weather is so changeable down here!

Photos of dawn Tuesday morning - with Venus and Jupiter high in E. 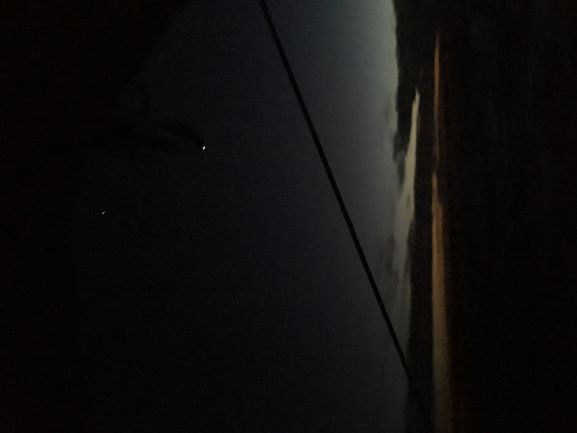 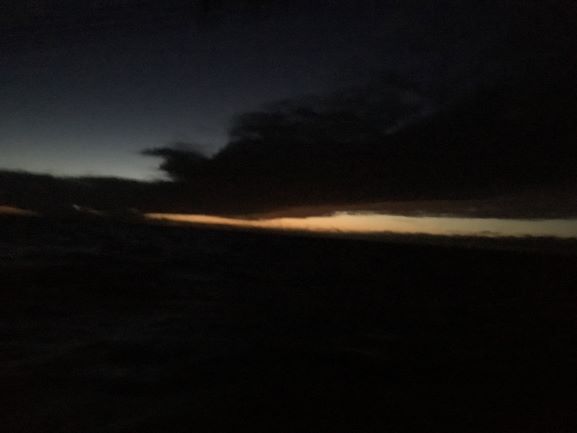