Thursday Just realised that what I thought was 8pm (local time, LT) is now almost 9pm - we're just about to move into the next time zone - GMT + 1 hour - being just a few miles W of 7*30'E - the 'marker' between GMT and the next time zone to the E.

Wind is slowly dying but we're still managing about 4.5kt in a W wind, having not long gybed onto starbosrd tack in the fading twilight.
Made a big pot of a thick 'broth' - lentils, potatoes, diced ham - an easy main meal for the next couple of days. Will add chopped onion and maybe some more vegetable tomorrow in good light - clambered into the forepeak to replenish galley supplies of fresh potatoes and onions a short while ago.

Friday 5am Surprised to find us making 5.5kt due East as first light of dawn appears in a mainly grey, cloudy sky before sunrise. No stars visible now... Wind has clearly increased for the time being - maybe the clouds have brought it with them?

3pm Having a lovely relaxed day - ambling along gently at only 3-3.5 kt in WSW light wind, although still rolling about quite a lot in the swell which has not lain down yet. Feels like a holiday, with frequent bright sunshine in between the clouds. Made a pot of fresh coffee, which I've not done for a while.

Looks as though these light conditions will be replaced tomorrow for a day or two with better wind and then the light winds of the High will take over by Monday for several days again - might well delay us passing S of Cape Agulhas. Only time will tell...

If the swell dies down a bit more, might be able to get to the mainsail but, with the wet conditions of yesterday, the sail needs to dry out more before it can be worked on - I just went to check on it and it's feeling very damp. No rain seems to be forecast for several days.

Had a look for a spare shackle to replace the one from the running backstay block that was lost overboard - it's a matter of the pin fitting the hole in the shackle that it has to pass through - two good strong ones nearly fit but not quite, so they're of no use. Can't afford to lose any more - running out of suitable replacements.

Having to keep an eye on our heading - in the light wind, it's all too easy to over-adjust Fred and end up going off course.

6pm Good job done! Found suitable replacement shackle - pin now wired in place - and checked all other shackles on deck and 'moused' several of those - also 'moused' the port side running backstay shackle with wire as well, as being sturdier than the plastic cable tie I'd used - maybe that was the problem with the other shackle pin - may be a plastic cable tie had been used and had broken away? I shan't know for sure but I do know the wire will now do a good job.

Also undid the running backstay lines and untwisted them - they always seem to get twisted after a time, so now they're straightened once more, so much easier to tension.

So much for no rain forecast - it's turned very dull now - the sky is covered in grey clouds and threatening rain...

While busy on deck, had my camera to hand and took several shots of a storm petrel circling around nearby, in hope that one photo at least might turn out to be good.

7:45pm Wind veered suddenly - to W - and is even lighter - making course difficult to maintain. Still a very grey, cloudy sky although, so far, no rain.
Added onion to my 'broth' - nice just to have to warm up something ready to eat...

Decided to 'goosewing' the trysail - so took the boom over to starboard, leaving the genoa to port - hoping it might help our speed, being close to dead downwind now. At least that means the trysail is not blanketing the genoa. 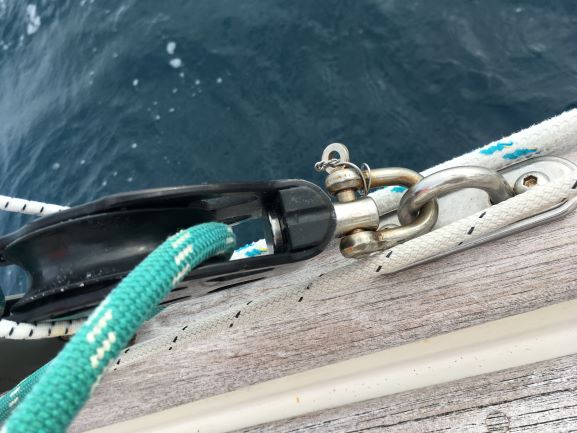 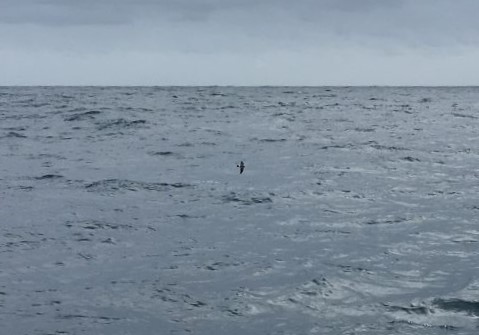 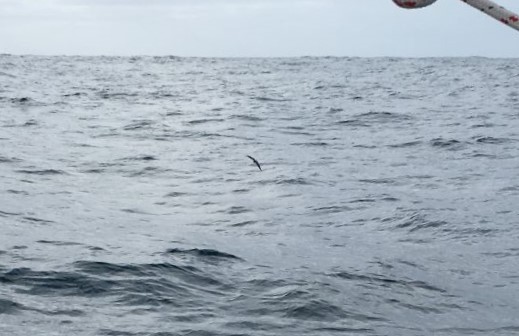