Friday 11pm A lovely moonlit night with wide path of silver light across a fairly calm sea, with Southern Cross high above. Wind is already slightly increased and is forecast to increase further to around 15kt or more over Saturday until Sunday morning, when it will lessen again, as we come into the next High pressure system for the following 2-3 days of light winds.
Making 3.2kt at present - double the average speed over the day earlier! All very quiet and peaceful...

Had a nice long chat with Tapio ('Asteria') on 40m - finally... A bit late for me, being well after midnight, in my time zone, but good to make it after several days of trying...

5:30am Sun not quite over the horizon but not far away - plenty of light in the sky and pink sky in the E... Lots of broken, light cloud overhead and darker, greyer cloud a good distance away to S.

7:30am Tried to contact Tapio again, on 20m, but nothing heard. (Later: gathered he didn't come up on frequency as he usually does - so hope all is OK with him.)

Stowed a bag of garbage out of the way, ready for eventual landfall. Mainly juice & milk cartons, well-rinsed with sea water and squashed flat with pourer removed and stored separately - surprising how many cartons can be squashed flat into a small space! Will definitely be running out of liquid/UHT milk before landfall - I'd cut right down on quantity, trying to save weight on board, so will have to rely on powdered milk only from then on. Will enjoy fresh milk that much more when I get back!

11am Mainly cloudy sky now. Wind has kicked in finally - making 5kt and heading NE for a bit, positioning ready for light winds in High soon. Wind expected to back slowly at first and then quickly into SSW later today - by nightfall, probably.

3pm A few petrels and shearwaters around under a totally overcast sky - but cloud layer fairly thin, so quite bright. Actually making nearly 6kt just now - amazing! Hope it keeps up for a bit before we're back into light winds again...

6pm Dull grey sky - gloomy, even, and feeling damp. But we're still making a reasonable speed, although it's dropped now to 5kt as we've come more onto a broad reach with the wind having backed slowly. Time must be getting close to when we'll need to gybe, as the wind backs further from its present W direction to SSW finally - that's the forecast, anyway!
Have been very relaxed today - have been enjoying reading, with a mug of tea in hand just now, after an early meal.

Feels as though wind may be dying... Certainly not very strong now.

Just heard Tapio is back on course at 5.8kt - so seems he's fine - good news! Will find out later, hopefully, why he was stopped for 5-7hrs

The wind seems to have changed - time to gybe is imminent...

...It just rained! Hadn't realised - but that was why the wind backed suddenly... On with the wet weather gear...

Centred the boom ready for the gybe - but the wind is still in the W - will wait a bit longer until it goes around to the WSW, or more, before gybing the genoa.

Sky is full of low, dark grey-blue rain clouds and wind has definitely died down a lot - we're only making just over 5kt now. Light is fading.

7:30pm Raining well now - fine, not heavy, but under solid rain cloud. Furled in some genoa after gybing it, as wind had increased quite a lot and backed to SSW. Now making 6.5-7.5 kt on starboard tack - nice to see a good speed for a time! Won't last long... :-( 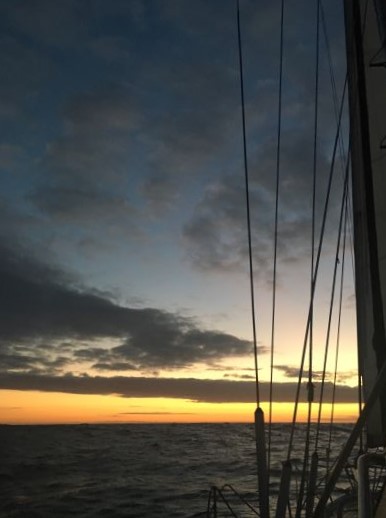 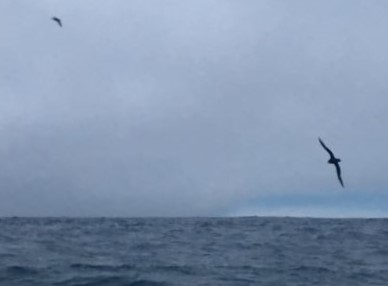