Monday 10:20pm Slow progress SE just now, under a bright moon showing occasionally between broken cloud. Unfurled the genoa when I realised the wind had come up but it took a long time to organise Fred and add in the correct amount of helm in order to keep us heading in a vaguely E direction. Current is still noticeable and NE wind that kicked in dropped almost immediately - very light now so we're only making around 3kt - but better that, than drifting in no wind at far less speed!

Heated up my stew earlier - just about to enjoy some before getting to my bunk..

Tuesday 1:20am Just let out all the genoa again, in light wind ... Had gusted up strongly a short while ago, so had furled in a fair amount as we were heeling a lot - but that was not needed later since wind has settled down under a mainly clear sky. We're making 4kt now, ESE, in NNE wind. A full moon is lighting up everything - no need for extra light to see what I'm doing on deck - a lovely night now, in fact.

9am Looks as though wind will be staying roughly NNE at 10kt or more over today with light swell. Quick breakfast and I'll see what can be achieved today. Expecting rain and Cold Front to pass over tomorrow so only today possible for work on deck. Bigger seas forecast for some time after today also.

Midday Wind has got up more - to 15kt - so we're making just over 5kt but making work more difficult on deck with increased choppy seas. Have managed to get an idea of length of tear by using a length of twine - about 9ft. Found another small tear - will put some Gorilla tape over it on both sides. Downloaded weather files and had a good look over those. Also having regularly to keep an eye on shipping nearby using AIS - " S'Hail Al Wajbah" is making for Shibushi - they changed course slightly to avoid coming so close as originally - was going to pass within half a mile, now 1.5ml. Agreed, over VHF, to pass on our port side.

1:10pm Back down below after dealing with small tear I found. Boat is making 5.5kt and moving a lot in the seas so not easy to work high up on deck beside the boom. Beginning to wonder when I'll be able to get much more done - to repair the sail requires undoing most of the sail ties to expose entire length of tear to work on - not possible in any wind. Also not possible to deal with loose section of genoa UV strip in present wind either.

Ship has just passed - on N horizon, 3 miles off - big cargo vessel headed to Japan. Warned me of Force 6 winds expected tomorrow and day after - kind of him! There's the Cold Front coming tomorrow with rain and winds possibly gusting up to 30kt - that's what his warning related to.

3:45pm Amazing! We've clearly got into a strong current region of the Agulhas Current - at 40 10'S 030 10'E - we've been making a consistent SOG of 8.7kt, reaching 9kt often, over the last half hour, probably more. Heading has been roughly ESE but COG (actual course over the ground) is more SE due to current. Wind is from N and just over 15kt, 18kt maybe - not enough to account for that SOG! The seas have been very rough and confused and we've been pounding into them a lot, even though they're more or less on our beam. Nice to have the current helping our speed like this - still seeing 8.7kt... Wouldn't like to be going against it - wouldn't make much headway, for sure!

7pm SOG was holding at over 9kt. Sea temperature 28.3C. Decided, with sunset, to furl in some genoa for overnight and readied the staysail for use later instead, possibly - shouldn't be needed since winds are expected to stay below 20kt until early tomorrow morning but nothing like being prepared....

Position & weather report, for 1900 GMT, posted to www.Winlink.org and www.Shiptrak.org (using my US callsign KC2IOV): 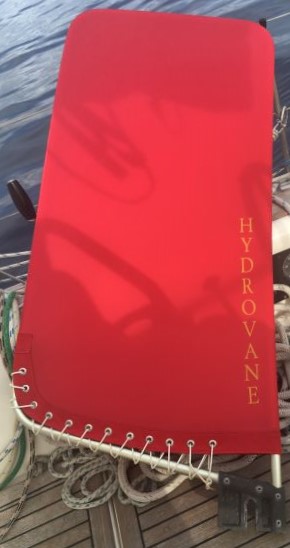 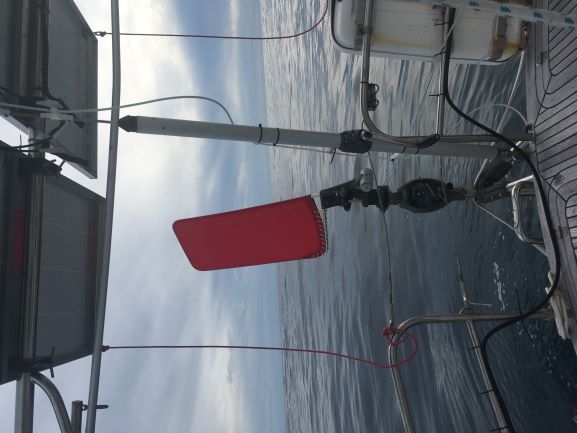 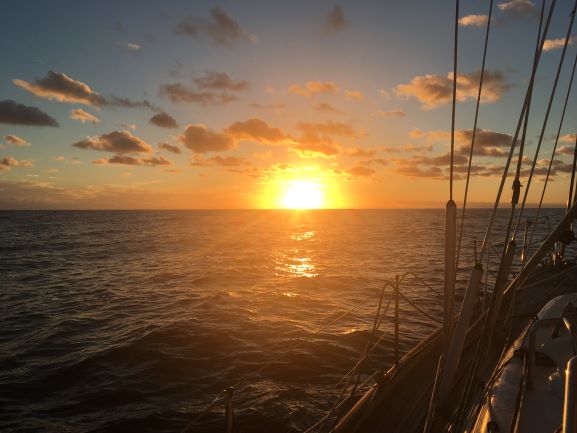