×
Wednesday 9:40pm Wind just backed all around from NNW to WSW - we just turned to port through a right angle! Time to gybe and get back on course - raining... 10:30pm Well, we gybed - but in pitch darkness it's so easy for something to go wrong - and it did... The lazy genoa sheet has got totally tangled with the sheet in use - too dark to do anything about it in safety now - will have to wait for daylight to try to sort it out. I tried to ease the one sheet as the other took up the slack and the sail came around in the gybe but ... no go... At least the wind has died now that the front has gone through. It's a lot calmer and the seas are a lot smoother going more downwind. Having some stew and will try to get some sleep. Hopefully the swell will be less after a few hours of lighter wind so it will be easier working on deck as I try to release the knots - won't be easy... Thursday 8:30am Bright and sunny with plenty of large white scattered clouds. Seas still big and close together - so we're rolling around a lot. Lots of white crests - 'white horses'! - so good Force 4-5 wind making it around 16kt or more. Lots of birds around - many coming really close to the boat. Getting a good look at a yellow-nosed albatross and white-chinned petrel in particular as they soar over the stern - must get the camera out. Think I also saw a sooty albatross - typical albatross shape, all-dark with glossy areas on underwings - must check in my bird book. Having breakfast before tackling the tangled genoa sheet - will take my marlin spike with me - that's such a useful item to have on board for undoing tight knots. Can't unfurl any more genoa until that's done. Sending off position/weather report to Winlink/Shiptrak. Several emails received - one about Uku's GGR time penalty - sad - he has so little food left and is so anxious to finish. I wish I could hear the recording of the radio conversation. Often it's not easy to hear the other person very clearly - especially when a high level of static noise present. I wonder which ham operators were involved and how recent this was? 11am Unravelling the genoa sheet (rope!) was nothig like as difficult as I'd imagined - it was simply looped around the other one - but many, many times... I might have attempted it last night if I'd realised how easy it would be - but best to stay safe. Seas have calmed down a lot now and although they're still big, they're more spaced apart. Wind also, unfortunately, so although the genoa is now full, we're only making 4kt. No more white horses out here... but plenty of birds close by, often resting in groups in the water. A pair of yellow-nosed albatross frequently seem to be taking a rest. 2:30pm We're mostly only making 2-3kt, 3.3kt is good! Mileage today will not be high... Cloudy sky alhough white, not grey, and air temperature has just hit the 20C - was 17-18C most of the morning. The sea, 23C, is warmer! 6pm Nearing sunset, with bright orange-red sun sinking down into a few streaks of cloud in an otherwise clear sky. So many birds around on this peaceful afternoon! Wandering and yellow-nosed albatrosses, with an all-dark (except for white face) juvenile Wandering, a few prions, lots of white-chinned petrels - several with distinct white 'chin' at base of their bill, a couple of storm petrels - the usual gang! They are definitely attracted to the boat - and frequently rest in the water nearby. Seas are actually very big - some at 4m/13ft - and coming from both SSW and W. Very little wind so have been making slow progress, presently at 3-4kt but most of the afternoon at under 3kt. 1900GMT (=2100LT) - end of Day 141. We made 95 n.ml. DMG over the 24 hr period, measured in a straight line between the two 1900 GMT positions. Total distance covered from Victoria, B.C., to end of Day 141 (by daily DMGs): 13,155 n.ml. Distances (at 1900GMT): Cape Leeuwin LH (SW Australia): 3631 n.ml. to ENE; SE Cape of Tasmania LH: 4478 n.ml. to ESE; Cape Agulhas LH (S.Africa): 858 n.ml. to NW; Cape Town Hbr entrance: 954 n.ml. to NW. Position & weather report, for 1900 GMT, posted to www.Winlink.org and www.Shiptrak.org (using my US callsign KC2IOV): TIME: 2019/02/21 19:00GMT LATITUDE: 41-26.59S LONGITUDE: 036-11.27E COURSE: 095T SPEED: 3.2kt WIND_SPEED: 8kt WIND_DIR: S SWELL_DIR: S SWELL_HT: 2.5m CLOUDS: 0% BARO: 1019.8hPa TREND: 0 AIR_TEMP: 18.0C SEA_TEMP: 22.0C COMMENT: Struggling in lt wind against Agulhas counter-current - flowing N-NE?; 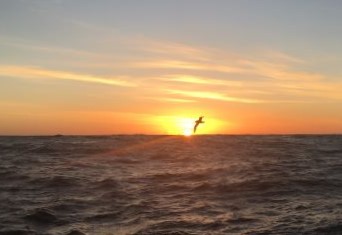 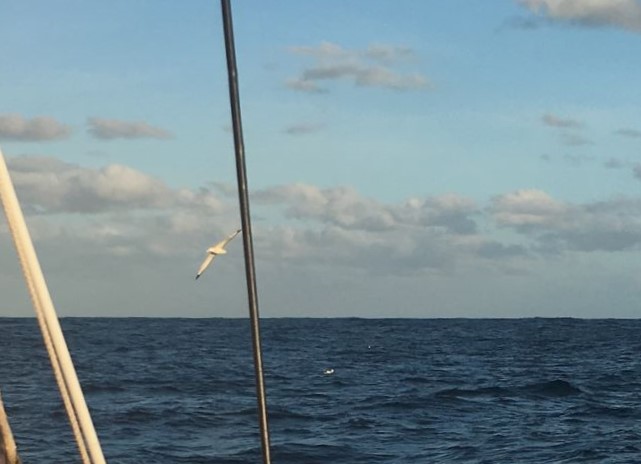 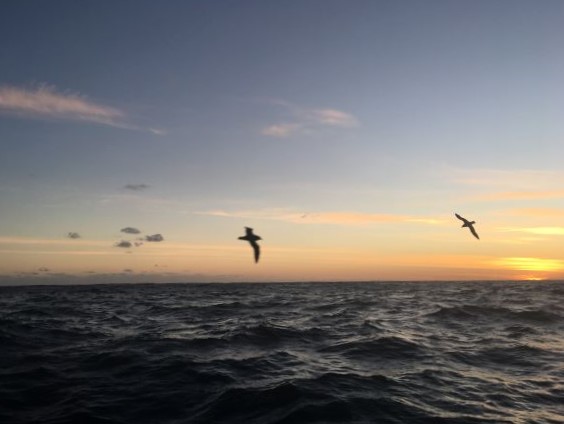