×
Sunday 11:30pm Speed has increased slightly - seeing 3.5kt instead of 2.5kt - maybe wind is filling in, finally...? Supposed to get up to NW 14kt about now - beam reach - and stay that way for a time, before increasing further early on Tuesday. Moon rose a short while ago - waning now - half-moon. Swell has increased slightly - we're bouncing about more than earlier. Later: Clearly quite a strong S-flowing current here - having to steer NE, upwind more, in order to make our ENE course - must be slowing us down. Making around 3.2 kt - rather pounding into the waves - uncomfortable motion. Moon is bright enough to give good light on deck - throwing a broad path of silver light across the sea towards us from between broken cloud. Monday 1am Making 4kt - still having to head more upwind and so still an awkward motion. 6am Much smoother sail, making 6kt but struggling to make close-hauled course to ENE. Grey, cloudy sky with some breaks for sun to shine through - sunrise was a short time ago. Occurred to me that heading upwind more to make close-reach course might not be necessarily due to current but due to imbalance of full genoa against trysail - 'bow steer'? 7:30am Rain shower... helps clean the sticky salt off everything on deck! Grey clouds have moved away. 11am Clear blue sky above - a few clouds on horizon and ahead. Sailing at well over 6kt, ENE towards 38S. Cold Front expected to approach tomorrow night and pass over on Wednesday, with strong wind. Time for breakfast... It's 8am GMT! 12:30pm The cloud ahead spread over soon after - but is well broken, so it's still quite sunny - and feeling warm - 25C. Sea temperature is back up also - to 27C now. We're making 6.5-7kt now - nice to see some decent speed! Seas are up and we're being moved around by them often. One just made us lurch - and my insulated coffee mug went flying from a place that is normally secure - but the mug simply jumped in the air and ended upside down on the cabin sole. Its lid was on, TG, so I grabbed it but have had to make do with a very small cup of coffee.. and a lot of cleaning up... 4pm Bright and sunny still, although lots of (white) clouds around - no threat of rain just now. Wind has slowly died back a bit over the afternoon, although still from WNW, so we're only making around 5kt now on a broad reach. Was nice to have the higher speed earlier. There must be a current at times because we have to head up or down in relation to the wind in order to make our course - I've adjusted Fred umpteen times today, as a result.... I get us nicely settled on course and then something changes (wind shift or some current) so another adjustment is needed not so long after the first. Whereas earlier in the day, we were headed more upwind to make our course, we're now heading slightly more off the wind to make it, implying a current effect - all very changeable and unpredictable. 6:55pm Rim of red sun just slipped down below the horizon - end of sunset at 40S 43.5E under a partly cloudy sky. Wind has dropped further to give SOG of only around 4kt - disappointing after the good speed earlier. Looking ahead, the CF coming through over Tues/Wed is looking as though it might have 25kt winds, possibly gusting higher, for a short time, so that's not looking as bad as had been forecast a few days ago. However, that will be followed by an intense Low arriving Thursday evening into Friday, giving over 30kt winds, gusting higher - that could give rough conditions for a time and the big question is whether or not we can get far enough NE of our present position to avoid the strongest winds and seas - Later - speed has dropped even more - to 2.5-3kt .... Grrr!! 1900GMT (=2200LT) - end of Day 145. We made 116 n.ml. DMG over the 24 hr period, measured in a straight line between the two 1900 GMT positions. Total distance covered from Victoria, B.C., to end of Day 145 (by daily DMGs): 13,508 n.ml. Distances (at 1900GMT): Cape Leeuwin LH (SW Australia): 3342 n.ml. to ENE; SE Cape of Tasmania LH: 4295 n.ml. to ESE; Cape Agulhas LH (S.Africa): 1164 n.ml. to NW; Cape Town Hbr entrance: 1258 n.ml. to NW; Marion Isl: 487 n.ml SSW; Kerguelen Isl: 1196 n.ml. SE; St Paul Isl: 1560 n.ml. E; Halfway point (55 18'E): 533 n.ml. Position & weather report, for 1900 GMT, posted to www.Winlink.org and www.Shiptrak.org (using my US callsign KC2IOV): TIME: 2019/02/25 19:00GMT LATITUDE: 39-56.99S LONGITUDE: 043-39.23E COURSE: 069T SPEED: 3.1kt WIND_SPEED: 8kt WIND_DIR: NW SWELL_DIR: NW SWELL_HT: 2.0m BARO: 1018hPa TREND: 0 AIR_TEMP: 21.0C SEA_TEMP: 24.0C COMMENT: Wind died again this afternoon - back to a very slow walking pace.. 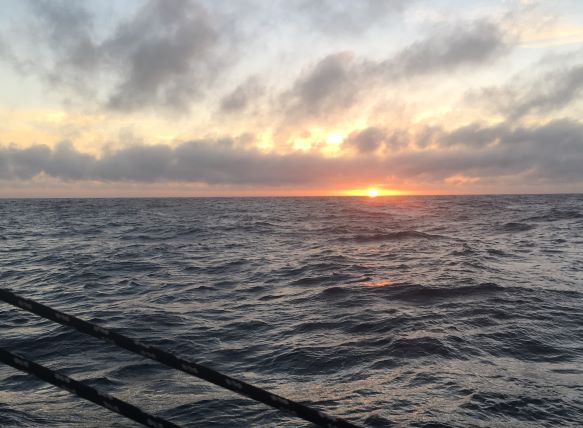