Friday 5am Woke up to find us having gone nowhere - under five miles S of our 10pm position last night. In such light wind, we were now crawling W instead of S... Wind is so light, difficult to keep on any heading, but finally gybed around to try to head S - worked for a very short time but only moving at just over half a knot ...SE now...

Excellent session on 7160 - getting W coast, as well as E coast, US stations clearly now - not too surprising since we're on antipode from W coast now... 12 hours time difference!

10:30am Have gybed around several times to see what course we can best make - wind keeps dying - windgen often not even turning at all. Have ended up on port tack, making ESE at around 2-2.5kt (3kt if any wind at all) - there must be an E-going current of around 2kt just here!

Will have breakfast and then start on jobs for today: 1) radio connections 2) mainsail leech repair. Seas are not too big with this light wind.

Midday Very, very quiet and feeling oh-so-smooth just now! Almost no swell but also almost no wind... so almost no noise! Wind generator hardly turning at all. Makes working easier, not to be fighting the rolling around that a big swell causes.

I'm sure there's an E-going current hereabouts! No way we'd be heading as we are in almost no wind otherwise. I'll continue to try to get more southing into our heading, as and when I can, since that's where the stronger winds are - to the S of this High pressure we're in just now.... Pressure increased a touch an hour or so ago but it's back down again - now 1017.8.

Presently making ESE again - had to adjust Fred to change our boat heading since wind (or current?) must have changed - if it's wind, it backed more to WSW, possibly... but still almost none - we're effectively drifting at 3kt - I'm just glad it's in the right direction!

1:45pm Getting very warm - lots of sunshine and only a few scattered thin streaks of white cloud in the bright blue sky. We're slowing right down, 1kt or less now, but still drifting more-or-less E, TG. Fred was keeping Nereida on a beam reach relative to the wind's direction, trying to head us S, and we're effectively drifting sideways now...

Have spent an age in aft cabin getting access to the radio's automatic tuner (ATU) so I can check all the connections both on the tuner and also leading to the backstay antenna which is directly above it. Has meant moving a lot of well-stowed & well-secured items so that I could remove a wooden panel in the cabin, the tuner being out of sight behind it - time-consuming! Have to stop and check on our progress at regular intervals, so that slows things down also. ... back to work...

4:50pm Found a wet, corroded antenna connection - all cleaned up now - shiny bright and sprayed with wax after all back together. Heat shrink over cable end replaced after cutting back a little to check there - all clean now. Heve tied cable so no water can get onto connection - made a downward loop to prevent that. Checked all other connections - look OK but took apart and cleaned up another screwed connection just to make sure.

6:30pm Finally finished in aft cabin - clearing up and putting everything back as was takes quite a time- especially rear wooden panel in cabin, hiding the ATU.
Found we needed to gybe - again... Think this light wind must be mainly NW but very shifty - have had to gybe so many times today trying to keep a course more S than E - S is where good wind is but E is often where I've found us drifting towards when the wind has died. Making just under 2kt

Checked the radio - seems better on 20m now - fingers crossed! Need to clean my work-dirty hands and have some food - have had nothing since breakfast. 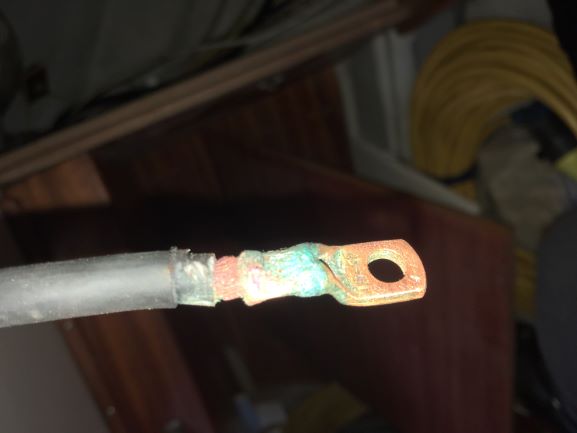