Sunday 1am Wind has got up a lot more - we're making over 4kt on a beam reach, making ESE on port tack with boat heading due E (current effect!). Front has not yet passed over since wind has clearly not yet backed into SW - but must be imminent since increased wind being felt.
Think I'll gybe soon, since otherwise I can't get to sleep.

2:30am Still raining quite heavily ahead of the expected Front. Gybed onto starboard tack, ready for windshift to S quadrant sometime soon. Will have to sleep in snatches to be ready for adjusting sail trim and course and generally to check all OK as wind changes direction. Presently making around 5kt on course of 170T.

5am VERY sudden windshift to SSE from WNW - in no time at all, genoa was backed and I had a problem getting us back on course with boat speed down so much... Glad I'd furled in genoa to 1st reef mark.
Making over 6kt in rough seas - very uncomfortable! Wind getting up to around 20kt, maybe more.

10am Had intended chatting on radio earlier to Ian & Volker but we were heeled over like mad, banging around, and the wind was screaming - clearly around 25-30kt, gusting more. Needed to get on deck and reduce sail. Although it was nice to see our speed hitting over 7kt, the boat was heeled far too much in the strong conditions.
With great difficulty, because of the motion of the boat, I had to put back on the overtrousers I'd not long removed and struggle into my heavy jacket - seas were constantly washing the decks, rushing over the hard top & into the cockpit.

Seas are impressive at 5-6m/16-20ft and covered with foam patches. Would be more comfortable if they were not almost on the beam... But the petrels are happy - they get a free ride in these conditions.
Our course is due E, so it's nice to know we're making a fair distance in the right direction, for a change.... What a difference from yesterday!

Trying to make a log entry - to stop myself falling out of the heeled-over seat, I've lowered the stainless steel foam-covered 'arm rest' - keeps me safe while at the chart table. It's also good to have some cereal bars, nuts, dried fruit and bottles of water within easy reach - my breakfast today.

Time to get back to my bunk - much more comfortable and safe there! Can't wait for the wind to veer from S to W - downwind is such a more pleasant point of sail than being on a beam reach in these conditions.

11am Sudden lull in the wind - things went very quiet - but not for long, although wind definitely seems to be less, now.

3pm/1200GMT Wind still SSE but a lot less - 15-20kt perhaps. Seas still well up at 4-5m/~15ft so still a very bumpy ride, no less because we're constantly banging into the seas, being on a close reach still. Making due E at 4-5kt after unfurling full genoa - we needed more sail, with our speed having dropped way down with less wind.
It's a good thing I looked at Fred yesterday - by now we'd have lost the rudder (although it's tied on with a safety leash) and there's no way I could have done the work on Fred that I did then in the present big seas and generally rough conditions.

Expecting conditions to ease and wind to veer very slowly to SSW by tomorrow and to SW, becoming W, by Tuesday. Soon after that, might well get into a High again once the new Low to the S has completely passed on E.

9pm Still very bumpy - seas not so enormous now but a lot of 'wind waves' on top - so feeling quite rough since we're headed into them.
Making 4-5kt due E - varies somewhat, depending on wind direction.

Have been catching up on email replies again - although I'm not sure when they'll be sent since radio connection to shore station in Cape Town is getting very uncertain - mostly not happening but I keep trying - and every now and then I get a connection. The Winlink sysop in Moscow was astonished by my use of his station last week - might try him later tonight if Cape Town remains unreachable. (Later: That worked again! But only a few were sent - connection went down...) Otherwise, my replies will have to wait to be sent until I get closer to Treeton , W. Australia - a good station but still just too far away to be usable at present.
Photo: Dressed for work in wet weather on deck - wet after coming back down below! 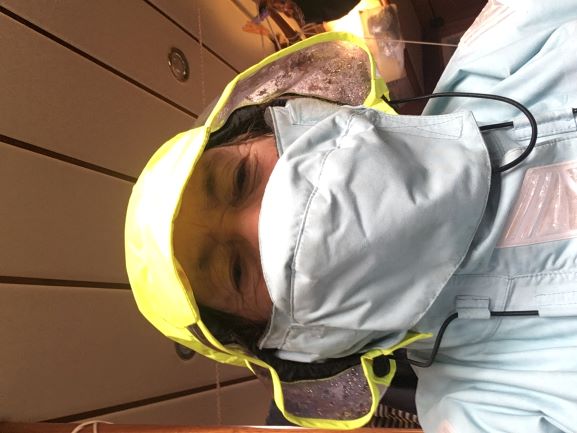