Thursday 7:30am We've hardly moved any distance overnight when our speed was often down below 1kt and we're presently making just over 1kt - the wind virtually switched off as night fell yesterday!

Seas are down to 4m, there's broken light cloud overhead and the edge of the cloud layer is visible in SW. We're making ESE with difficulty in the light wind and rolling around quite a lot in the swell still.

Weather forecast shows this will continue for rest of today, with chance of a little more wind maybe tonight. I'm hoping we'll keep away from light headwinds by edging more SE - H is supposed to be moving NE so we might be lucky there.

Midday Sun is shining weakly from a mainly cloudy/hazy sky and a group of petrels is circling the boat - mainly gliding... occasional flaps of their wings in the very light breeze. The wind generator is rarely turning - and then only slowly. It has been giving me a good measure of wind strength when the wind is so very light, as now.

Checked latest weather information - not much change - in a High now, but fortunately we're just in its southern half, so winds are fair. That's followed by the High becoming a long ridge, giving several days of good W wind - then a bit of a messy scenario with, probably, unavoidable light headwinds part of the time - but that's some time away so could all change.

Just checked the bilge - relieved to find very little more water in there after the rough seas of the last two days - so that's comforting. Spending a time emptying what is there - just to check on quantity.

Then it's on to the mainsail job - hot-knife cutting the spare sail material carefully to give two good heat-sealed edges before joining the two pieces together to make a long strip to wrap around the leech tear and eventually sew in place as and when the opportunity arises over the next week or so (i.e. when trapped in a High, as now!).

4pm Still only making just over 2kt in light SW wind under sunny sky with plenty of scattered light cloud. Pressure right up at 1030hPa - we're near the centre of this High.

Took a time to investigate where bilge water coming from - not critical, in view of amount concerned, but clearly good to know. Think I found at least part of the problem so I can keep an eye on there. Suspect chain plates also but no obvious major leak there either - all good! Will get out a spare bilge pump I have stored away and organise a hose and electric connection - will be useful, I think.
Back to cutting material for mainsail...

6pm Sun getting low - still very light wind - ambling along at around 2kt.
About to have a nice beef stew I just made - with potatoes, onions, green beans, some sweetcorn ... Looking forward to it - I'm hungry!

6:45pm Sun set a while go - birds were all around, mainly white-chinned petrels but a yellow-nosed albatross there as well.

Expecting the wind to veer into the WNW very soon and become NW later tonight. Decided to gybe in advance, while still some light to see by, so we're heading NNE at present on port tack (wind coming onto boat from its port side). As the wind veers (i.e. shifts clockwise in its direction), we'll change our heading clockwise along with it. Once we're heading E, I'll need to adjust the genoa sheets (lines controlling the genoa - big headsail) to stay heading E - so we'll end up heading downwind on a broad reach - usually a pleasant point of sail but best if there's a decent wind strength to push us along at a fair speed!

Getting to my bunk now for an hour or two of sleep - I'm changing my sleep habits in an effort to get the total amount I need each night.. The stew was great!

10.30pm Wind slowly veering - making course ENE now - will soon be making a course due E. Back to sleep soon - after sail trim checked and this news report and position/weather report all posted. 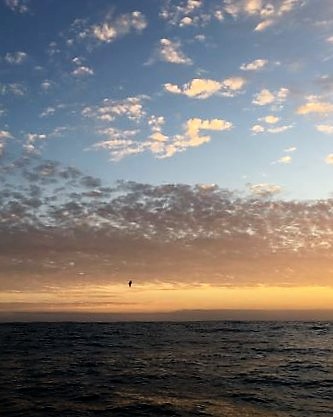 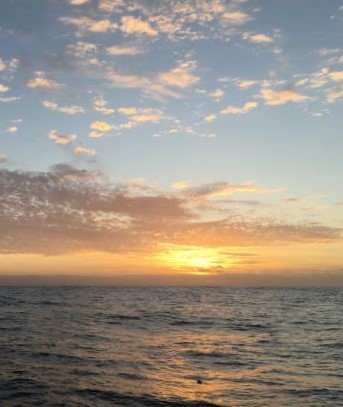