Monday 2am Just posted reports and blog - seas very rough still, so being tossed around a lot. Definitely needing the removable steel 'armrest' on my left-hand side which keeps me from being thrown out of my seat as we heel over and bang around. Getting to my bunk for more sleep now...

7am SSE 15kt wind under grey, cloudy sky, on a close reach, only making 3.5-4 kt... Need to unfurl that genoa to speed us up - daylight mow. Will put on my foulie jacket first, though - even a damp one is better than none!

7:20am Full genoa - now making around 4.3-5.0 kt - a bit better than before. Seas still quite rough - short period still. Speed up to 5.6 kt in gust.
Noticed a slight headache overnight - sign of dehydration - must drink more fluids - easy not to do that when it's cold. Back to my warm, cosy bunk...

Midday Lovely to make good contact on 20m with several Australian stations - clear copy and several nice chats with guys from West to East coasts and in between! Looking forward to it being a daily event. We're now 1100 miles WSW of Cape Leeuwin which is on the SE corner of Australia, S of Fremantle and Perth.
Wind is light, from just E of S - so progress is very, very slow now, especially since it's upwind which is our worst point of sail in light winds without the mainsail to help.
A dull day, with 99% cloud - a couple of blue patches seen in small gaps between them.
Seas are still well up - in fact, looks as though swell is coming from several directions, so seas occasionally really lump up when they combine and we get thrown around big-time.
Still looking for a chance to sew the mainsail- but not looking as though it will be possible today. By tonight, the wind might have become light from W, which will put us on port tack, so, early tomorrow, there might be a chance to get to work before the winds pick up again later and back to the SW with a passing front - fingers crossed!
Time for a quick lunch of Brie on Ryvita and then a short nap. I found a small tin of Brie that's I'd forgotten about - it's not too bad, although a bit darker than usual and not as good as a fresh Brie would be - but I'm not complaining - nice to have it.

5:30pm LT / 1130GMT Red globe of the sun is setting into the green-blue/grey of the sea beautifully - not much cloud around. Wind is only about 5kt so we're not going anywhere very fast - wind generator blades not turning. Wind seems to be more from WSW now and has veered over the afternoon. We're only drifting at under 1 kt so heading almost becomes irrelevant, although it's always nice to be going in the preferred direction, however slowly...! Sipping a nice hot chocolate drink - outside air temperature is 13C but cabin temperature is 17C... not too bad, but I'm wearing plenty.

Radio communication has really taken off now - having made contact with the 20m ANZA Net earlier, there's a couple of other Nets also waiting to make contact as I get a little further E. I'm still talking to a few S.African stations on 20m over the day, and 40m at night, as well, although that's getting more difficult as I move E. I even just now made a poor contact on 40m with the E. coast USA - so that path is opening up at their sunrise also - K3MA, in Pennsylvania, came in strongly. The 40m path at 0200Z has been consistently good for several months to the E. coast USA near their sunset although we've had to move the time forward slightly a few times for better propagation as I've moved.

6:30pm Almost completely dark now but there's still some salmon-pink light over the W horizon. We're rolling around a lot in swell. The main, big one is from S at 3.5-4 m (12ft), every 8 seconds, but there are two smaller ones, from WSW and SE, which come in between and sometimes coincide - making for an uncomfortable time. I really hope they all diminish by the morning - I'm hoping to get started on the mainsail repair again soon after dawn and work most of the day, if all goes to plan and conditions permit.

Had a good nap earlier so will catch up on emails now, before having some ham & green pea soup and then getting some more sleep - I want to be ready for an early start on the sail in the morning!

8:10pm Just took the boom and genoa over to starboard - so we're theoretically on port tack - but wind is only 5kt still, from WSW, so making only 0.5kt with COG roughly NE - the wind should fill in more and go more to NW so our course and speed should improve over the night... In the meantime, we're making some Easting and Northing - both good for now and we're not so far off course anyway.
Soup is heating up - I'm hungry!

12:30am Tuesday LT (1830 GMT Monday) Date and time beginning to get a bit confusing! Wind has definitely settled into WNW and we've often been making 1-1.6kt, rather than just under 1kt - means we can hold our ENE course better - we had been wandering around earlier. About to make my daily reports - position, weather and news/blog - plus two photos today - one showing the tin of Brie I found and one of the sunset. 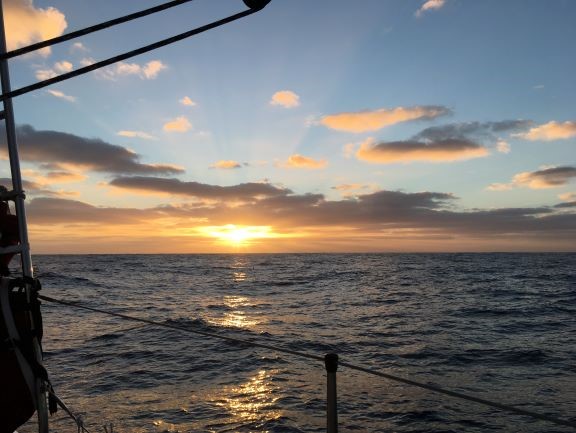 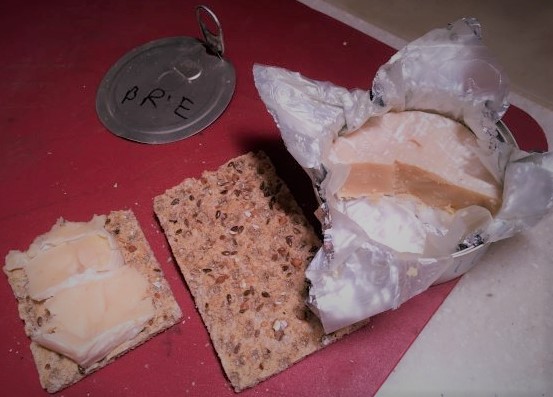