Wednesday 3am Reports and blog now posted. Having my stew - lovely to have hot food all ready! Wind under 20kt and likely to remain down overnight and over the morning also. Now making around 5.1kt . Seas feeling calmer than earlier - probably because we're headed downwind.
3:25am Stew was so good I had another bowlful! Back to my bunk now, for more sleep.

8am Bright sunny day, blue sky overhead and good wind again. Pressure was down at 999.9hPa an hour ago but maybe rising slowly - at 1000.1hPa now, as I'm writing. Making around 6kt in wind about 20kt from NW.
Had a good session at 7am on 7160 - good propagation today - good signals from US E. coast from Maine to Florida.
About to furl in genoa a touch (to first reef mark) so I can get another short sleep again - didn't quite get enough overnight... (8:30am Still making 6-7kt, despite furling in)

11:50am Rain ... and wind suddenly gusted up and backed a lot! Had me on deck (donning my jacket on the way!) in a hurry! Then wind died back down ... so now making only 4kt instead of the previous 6kt or more. Think I'm seeing gusts under the rainclouds - the usual 'cloud effect'.

1pm Just finished on the ANZA Net - great to have a quick chat with so many Aussies... and a couple of Kiwis today! Making me feel very welcome - thanks to Tex (Net Control today), VK1TX, and to all of you for that!
Before that, I'd reduced the genoa, thinking the wind was likely to gust up again at any time under the present clouds, and 45kt gusts have been forecast for later today and overnight, as and when the Front really does come through.
Then the wind died and we were making only 4.5kt so I was about to unfurl more genoa - but now we're back to 6kt - so I'm leaving the genoa strictly alone for the time being - I'll furl it in, and go with just the small staysail, overnight possibly, to avoid a problem should the strong gusts arrive while I'm in my bunk. (Seeing 7kt SOG now... Gusty conditions, for sure.)
Pressure 999.9hPa again - staying fairly constant around 1000hPa as the Low passes to the S of here..
Now within 500 n.miles of Cape Leeuwin and 330 n.ml. from passing due S of it.

2:30pm Rain clouds have all given way to scattered small white clouds and bright sunshine with plenty of blue sky - much more cheerful! Wind has dropped, so unfurled genoa to speed us along - making around 6.3kt now.
A few prions and petrels around and caught sight of an albatross soaring over the waves in the distance, earlier today.

4:30pm A lovely sunny afternoon. Sky is almost clear blue - just a few big clouds on the NE horizon ahead. Sunset not far away - will be a good one, I'm thinking. Making around 6.3 kt still. Unbelievable to think that in just a few hours' time, the wind will be whistling in the rigging and seas will be well up again, with rough conditions.
Keep getting drawn to look at the weather info... over and over... checking and double-checking the info. Expecting strong winds, with possible 40-45kt gusts, from today 1200 GMT (7pm LT) until 0600 GMT tomorrow (1pm LT) with highest gusts expected around 2300GMT (6amLT/dawn). The good news is that the wind will be from WNW-WSW and we'll be running roughly E - downwind - the best possible way to be going in strong conditions, with seas from astern...

5:40pm Getting dark, sunset was a short while ago - not the blazing orange globe sinking into the sea as I'd expected but a yellow globe fading as it sank into the almost hidden low cloud layer over the horizon astern. Crescent moon high up and a lone petrel circling around... Seas have built up again - a good 4m or more but well spaced apart and coming onto our port quarter. Wind up and down a little now - making just 5-5.5 kt one moment and then back up to 6.3kt a few moments later.

7pm Problem now is the wind hasn't yet picked up - and I don't want to kill our speed by furling in the genoa yet, as I'd intended...
Means I'll have to get sleep in snatches, so that the moment the wind picks up, I'm ready to jump on deck and reduce sail... I'll be sleeping in my foulies tonight!

10:30pm Well, the lovely clear starry sky is now gone, replaced by cloud giving heavy rain ...and a big wind... Genoa is now furled in completely - almost certainly prematurely, since our speed has dropped a lot (it was a gust that has died down now, of course!) but I feel safer with it away, leaving just the staysail now, plus trysail. I'm sure there will be more gusts but now I can get to my bunk for some sleep, knowing we'll be fine. I thought the wind would have stayed well up, but it hasn't. The forecast was for 26kt about now, rising to 30kt, starting 3-4 hours later, gusting higher, over the following 12 hrs.

2am Thurs LT (Wed 1900 GMT) Rough going - glad the genoa is furled away... Strong conditions with frequent gusts (one came around midnight) and big seas catching us for a bit of surfing at times... Back to my bunk after posting this... Will be nice when it all calms down later! 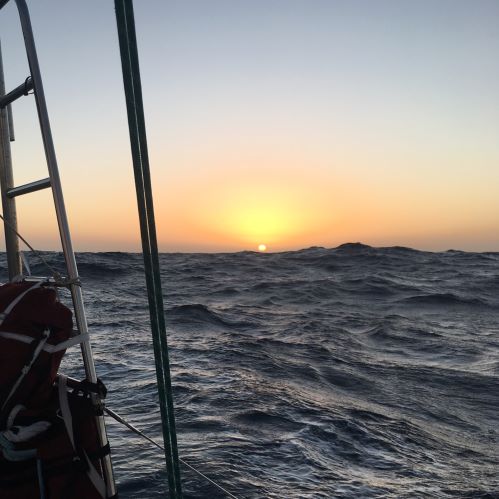