Monday 4:20am Wind died down to 20-25kt now, after gusting to just over 30kt from W-WNW. Seas not too bad, from W-WNW also.
Just finished with posting reports and checking emails - back to my bunk now ...

7:20am Rainclouds cleared away - big ones, outlined ahead in the gold light of a low sun - within an hour or two of sunrise. Clear blue sky overhead now and just a few other clouds well away on the horizon - none astern, in the W - the direction the weather comes from.
Seas are big - 6m or so - fairly well-spaced with a good period but knocking us around - plenty of rocking and rolling just now...!. Making around 5kt, more each time a wave passes by and takes us with it for a very short time.
Preparing for 7160 rado sched - (later) good copy on US stations and excellent signals also, of course, from several Aussie stations - nice to chat with them. We're due S of Albany just now..

6:45am 60% scattered clouds and plenty of sunshine. Have been standing in the companionway, watching the seas roll by - impressive! Time for breakfast and then maybe another nap to catch up on sleep hours.

4pm Strong gusts a couple of times earlier and now just ending a lull - expecting conditions to become strong again - Wind to 37kt, gusts to 56kt, swell 7.6m ... plus wind waves, of course. Already being thrown around a lot by waves.

Just had to crawl around on all fours, scooping up some cereaal I managed to spill - amazing how quickly crispy flakes become soft in this atmosphere! It's about 16C/60F in the cabin - everything has a damp feel - even the paper of my logbook is feelng soft and damp - I have to take care how I handle it.

5:15pm Sun getting low. Making some food while it's relatively calm and there's daylight - very hungry anyway, so making a quick freeze-dried meal: Kung Pao chicken with rice. It's actually a double serving packet but I think I'll have no problem eating it all - I'm famished! (Later: Clearly good portion sizes - tasty but couldn't manage all of it!)

9pm Things seem relatively peaceful just now, although seas still well up - as forecast. A lull in between the stronger winds ...going rather slowly - just 4kt or so. Another lot of very strong winds coming up shortly and staying strong, with big gusts expected overnight - I'll be in my bunk for a lot of the time, sleeping, hopefully!
Making a hot Cuppasoup...

10pm Wind definitely increasing now and seas tossing us around. Getting to sleep while I can, for a short time.

3am Into a bit of a lull just now - being tossed around still but not very fast - except when on a wave crest and being taken forward by it...often at up to 10kt or so, but only momentarily... not maintained for any length of time. Most odd - expected to have strong, rough conditions throughout the night - but definitely far less wind just now. Pressure is very low (986.6hPa) so maybe the wind will come up again as Front on Low passes over soon...? 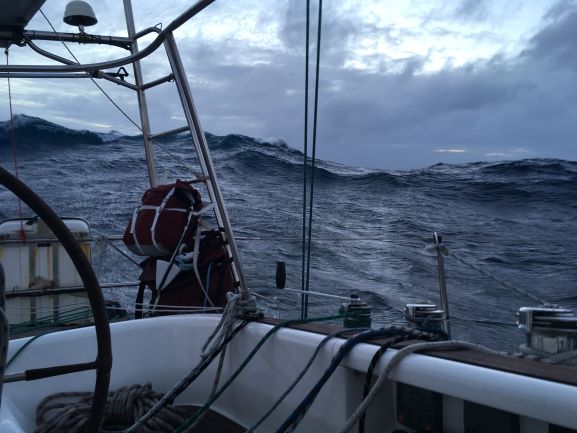