×
Wednesday 3am LT Dark night with no sign of moon or stars. Wind well up, 25-30kt, and from WSW so needing to make ENE course still, to keep staysail filled. Seas still well up and rolling us around. Had some good sleep - back to bunk after posting reports..

8:20am Magnetic variation is now ZERO! Position now is 39 12S 123 01E and will be coming back into region of E variation from the W variation I've seen for some time - since the Atlantic, in fact. The compass reading is spot on now! Instead of the compass reading high it will soon be reading low - I'll have to add the value of the local variation to it to get a True reading.
Interesting that the only good radio contact on a regular 40m sched (7160) slightly earlier (2330Z/7:30amLT) with N.America was with Florida and not with points further North - the path seems to be no longer open to there - it was well past sunrise here. Lots of calls made but no response heard from Maine and other usual places.
It's a lovely sunny morning with a very thin hazy layer and just a few small white clouds around - but cold! 14C/57F in the cabin here - I'm wearing plenty!
Feeling a lot calmer - wind is down around 20kt and I'll unfurl the genoa now to speed us up. Seas are still big but slowly getting less although we're still being thrown around quite often. Pressure has gone well up - to 1014.6hPa from 992.5hPa around this time yesterday.

10:15am The recent big, rough seas definitely took their toll in the cockpit area! Has taken an age on deck sorting out tangled lines caught on the starboard winches and jammers and side deck, where they'd jumped to over the coaming from the cockpit seat. Wish I'd taken a photo! Also had to retrieve the mainsheet trailing in the sea astern! Needed to do all that before even starting to think about gybing - which was reason I was on deck in the first place.. Finally finished gybing the staysail and unfurled the genoa as well, to give more speed in present lighter winds - about 20kt, maybe just less.
Genoa refused to unfurl totally - went forward, hoping to persuade it, but no joy... A line must have caught in the top furler... Hope I can sort the problem out when seas calm down a bit more...
Still rolling around quite vigorously at times - downwind sailing... and the seas are still pretty big at 7m or so.
Good to see an albatross this morning - been missing seeing many birds for some time.
Now for breakfast which I'll have while checking our 'best' course to steer, from looking at the weather forecast, and emails...

2pm Had a long chat with Colin, VK6CI, about the wi-fi issues - seems might be related to voltage 'seen' by Aurora. Presently, with all the strong winds we've been getting, wind generator (Superwind) has been piling in the electrons so batteries are well-charged and, since yesterday, there's been no problem. I've has a few questions answered which is good and I'll be checking the power connectors - if bright and shiny, that's good. Have been 'pinging' the system all morning and it's basically looking fine. I'll be looking to see what happens when the batteries are down...

4:45pm Dull, grey.. wind down, speed well down ... Pleased to find the genoa had completed its unfurling by freeing itself - wasn't fancying a mast climb to do that! Tensioned the line (Spectra removable inner forestay) that I suspect had caused the problem
Spoke to Jeremy on Dover Radio in Tasmania - last met him and Penny in 2012 when I sailed to Hobart from Cape Town and we spoke daily on radio when I was passing Tasmania again in 2013 on my last nonstop around, so it's nice to renew the contact.

7pm Gybed headsails and changed course slightly in light WNW-NW wind - making directly for Tasmania now. Weather looking helpful and, after the next system has passed by over Easter weekend, weather is looking good for rounding Tasmania's SE Cape within the next 9-10 days.
Sunset earlier was rather beautiful - like a pastel water colour.
Bright nearly-full moon is lighting the sea with a broad path of silver light. The cockpit is amazingly well lit. Even when behind the occasional cloud, the moon lights up the scene really well. 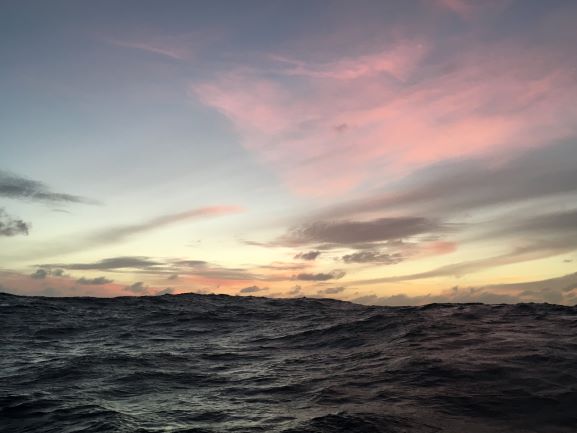