Saturday 5:45am LT (Fri 1945GMT) Starry sky overhead and to the S, but some cloud towards Tasmania, to the N.
Speed has dropped from 4.5kt a short while ago to around 3.8kt - so the hope that we'll manage to pass the SE Cape well before midday is looking over-optimistic... Back to my bunk....

8:30am Overnight rain has cleared away and sky is quite cloudy but clouds are well broken with plenty of blue showing - pressure is rising rapidly - so the High is on its way... It's feeling relatively calm but with the wind clearly up a bit again - speed up again to 4.5-5kt and we're now just over 5 miles from passing SE Cape - constantly keeping an eye on that WP and our distance off!

9:56 am We passed S of the SE Cape of Tasmania and we're now back in the Pacific Ocean - the Fourth Great Cape has finally been rounded!!
Now we head for NZ's SW Cape on Stewart Island - the 'Fifth Great Cape'.
The sun is shining brightly and the clouds seem to be clearing. This is a good day!

Later: Was busy trying to see to wiring problem related to wind instrument, despite swell making it difficult (tied myself to mast support in cabin!). Finally got around wire connection problem and powered up the wind system - but not looking good. Very disappointing since I'd hoped the problem was simply one resolved by powering the system back up ... but not so. Tested voltages over and over, at different points - seem to indicate malfunction. Frustrating since it has so often been working fine, even though intermittently.
Looks as though I might have to dig out a possible spare (used) transducer (and hope it's working OK, but can possibly test that first). Would need to place it on the stern steel arch and lead the cable to the cockpit display, or down below, somehow. Convoluted installation... but might give a good enough rough indication, although wouldn't be in clean air, as is the one at the mast top.

Looking at weather ahead - not looking good with light winds and wind from SE coming up (our rhumb-line course to Stewart Island is SE), together with a Low giving stronger winds on Monday, followed by light winds again, and then a Low forming off Stewart Island, possibly developing to give strong winds and high gusts next Saturday - just as we'd be getting close to there if we kept up a good speed.
To deploy the JSD requires plenty of sea room... so presently going very slowly, hoping to avoid that scenario. Will head roughly E for next few days and see how the weather develops but hoping that, by going slowly now, the worst of that storm will pass ahead of us. It might even end up not too strong - but until nearer the time, no way of knowing.
Frustrating to have this delay as we're about to head around New Zealand and then N in the Pacific at last - but best to avoid a storm if possible. We're effectively fore-reaching now, in a wind slowly backing to SE, trying to keep our speed below 3kt - not difficult in present light conditions.

Despite the gloomy weather forecast, I did manage to have a little party on board to celebrate the Fourth Great Cape rounding - plenty of music, a nice meal, with 'treats' before and after, and a small 'Dark 'n' Stormy' for a toast.

Weather over the day was a mix of sunshine and showers and the seas have been quite confused a lot of the time with more than one swell running from different directions - so we've been tossed around a lot at times. 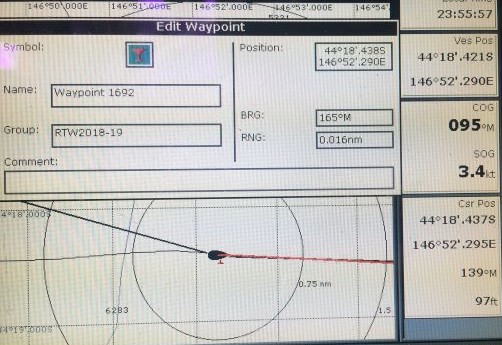