Friday 6:30am Pre-dawn first light getting stronger. Wind from NW has eased to around 17kt. Making just under 4.5kt, on rhumb line to Stewart Island. Forecast is for wind to die slowly from now on - another day ahead of light winds and possibly more drifting around, before a strong system comes by from Sunday onward...

9:15am Wind just backed to SW from NW as rain came through - a Cold Front passing over. Sail was backed so had to get on deck and gybe it - on to starboard tack. Was making fair speed for a time before then but wind died afterwards.

11am Just called 'Pan Gloris' on VHF16 - 12ml to our W. They have no signal from us on radar or on AIS as yet. Asked them to let me know when they see us. Informed them wind dying, so difficult to maintain a course, under sail and no engine.
Cloud breaking up to give patches of blue sky.

Midday 'Pan Gloris' passing by - first ship seen 'in the flesh' for many months! They radioed to say they saw us on radar 12 miles off ... and then, at 4.5 miles off, they saw our AIS signal.
Have been cleaning contacts on Aurora connection, hoping to improve behaviour. Would be good to have it performing well.

1pm Wind got up earlier to near 20kt - was about to get on with mainsail sail slides - but too windy. But meant we could make way on course.
Now wind has died back again, but only to 13-15kt - still too much for mainsail work, although can keep sailing on course, not very fast. Gusty conditions under the grey clouds around just now, although no more rain since this morning's shower.
Wind has backed further and gone more S, so fairly close-hauled at present - at least we're making way...

9pm Wind from S died right down around sunset. We were drifting around for several hours but are now making way again at just over 2kt more or less on course, close-hauled in S-SSE wind of around 12 kt. Have spent a lot of time on Aurora/Redport problem - have been tearing my hair out so often... Frustrating! Partly seems to be connected with congestion on the Iridium Internet satellite link, but not all. Getting a lot of help from Colin, VK6CI, still - thanks again, Colin!

5am Saturday LT (1900Z Friday) SSW-SW wind often right down around 9kt (seeing 7kt wind and SOG 1.3kt, as I write this) - barely making way, but on course to Stewart Island.... Hoping wind light enough in daylight (dark now) to get at those mainsail sail slides.
Expecting strong winds from later today, on over weekend and into next week. 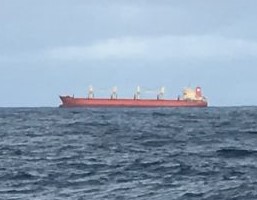 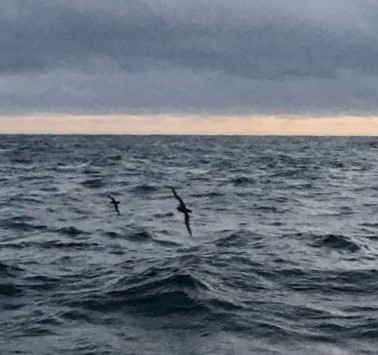