Thursday Dawn breaking around 8 a.m. Having to keep well clear of several small islands to W of the SW end of Stewart Island on the approach..

A lovely dawn over the islands - several small ones off the main island. The occasional albatross flies close by - lovely to see, as always. Sky becoming clearer as overnight clouds mainly disappear but half-moon is still bright and quite high up.

Spoke to Taupo Maritime Radio, to give my usual twice-daily status report, and also to Meri of Bluff Fishermen's Radio - she does a wonderful job keeping an eye on the fishermen's whereabouts and status, especially in bad weather - of which there's plenty hereabouts... At below 47S, we're well down in the Southern Ocean again.

Course now is SE in a W-WSW wind but will change course to ENE as soon as it's safe to do so. Hoping for a change in wind direction to WNW very soon, to help the change of course.

Spoke to a NZ/Aus Ham Radio Net both to pass on my best wishes and to let them know what is happening - will contact a few more later today.

10:52 a.m. NZT Passing the SW Cape on Stewart Island... Gybed onto port tack just beforehand - the wind had veered just enough to make that feasible. Wind is 16-20kt so speed a bit better - often making ~4kt on a very broad reach.
Gusty conditions under the occasional cloud in shower. A lovely rainbow shone as we were rounding the Cape - an omen of good luck? I could do with some!!
Enjoying a 'special' breakfast of dried fruit, nuts and seeds with delicious mango juice to start with - thinking ahead to the warmer climates coming up soon, further N...
Will celebrate later with a rum punch - mango juice and orange juice with some dark spiced rum (I've a little rum still left from my earlier four 'Dark and Stormy' Great Cape celebratory drinks!)

11:38 am Passing the South Cape on Stewart Island - mostly bright sunshine at times, sun quite low, making a photo of the scene difficult... Then a rain cloud came over the island, hiding the sun - so a photo was possible. This is possibly the last land I'll see until Polynesia, maybe Hawaii, before Canada.

Had a lovely, relaxed sail in the lee of Stewart Island over the rest of the day with plenty of albatrosses coming by at times. The seas had lain right down so it felt a lot smoother than on the approach to the island earlier, and the wind was from W around 16kt or more, making for an easy sail NE, well off the coast but within sight of it.

Downloaded a lot of congratulatory emails and spoke to a few people by satphone (working fine, so long as I kept an eye that its power supply was well-connected).

Totally enjoyed the day, celebrating the 'Fifth Great Cape Rounding'... feels really good and the weather is cooperating fantastically well! Found some delicious olive and sun-dried tomato tapenade (from Saltspring Island) to spread on crackers, opened a small tin of anchovy-stuffed green olives and had them with cashews to go with a long (weak!) G&T as sunset approached, and a glass of red wine with my meal later. Even managed to raise a toast to 'The Fifth Cape' with friends by satphone!
Enjoyed making a few amateur radio contacts on the SSB/HF radio - not something I've been doing of late, in an effort to conserve battery power - but today was a special day so I 'treated' myself and enjoyed the short chats.

8pm Spoke to Taupo Radio - asked them to alert a fishing trawler to the NE of us that we were headed their way overnight, just as a precaution. Also spoke to Meri to confirm which weather areas I should be taking note of in her weather broadcasts. Presently 'Foveaux', but once N of 'The Nuggets' we'll be in sea area 'Chalmers' (near Dunedin) was her answer.

Friday 4am Crossing the E end of Foveaux Strait at the S end of South Island, NZ. Wind has veered more and gusted up - NW now, so needing to adjust sail trim. Sail had woken me up with its unhappy noise but once sheeted in a lot more it was far better and our speed picked right up again - now making 5.8kt or more in 20kt wind. Adjusted course slightly to give more clearance off The Nuggets, around the SE corner of S. Island.

7am Wind has died back now, although still from NW, so only making around 4-4.5kt. Spoke to Meri on Bluff Fishermen's Radio and listened to weather forecasts. Seas have calmed down a lot - giving a gentle rocking of the boat - quite pleasant. 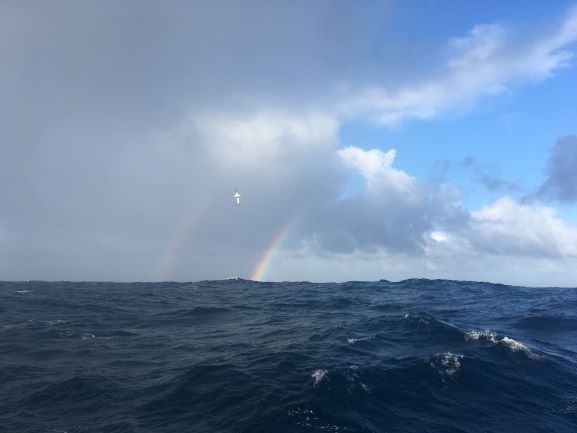 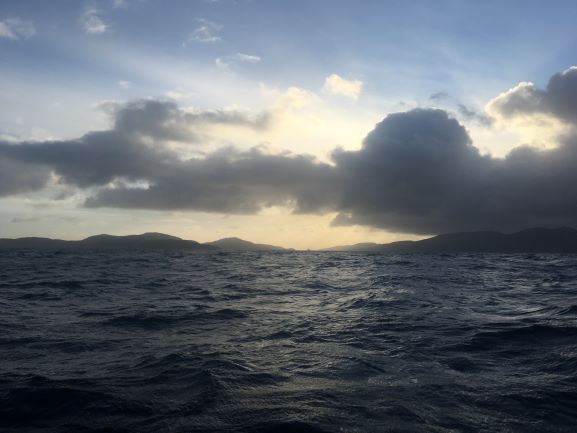 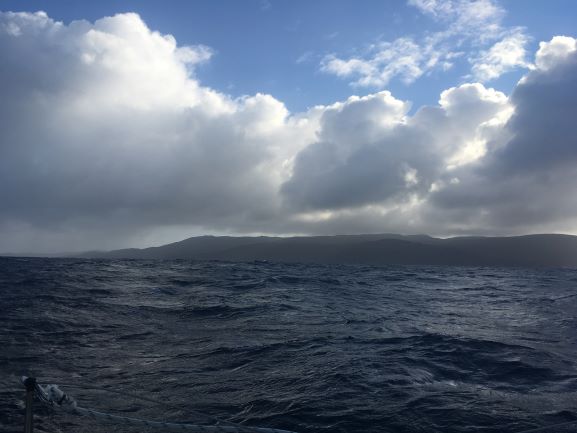 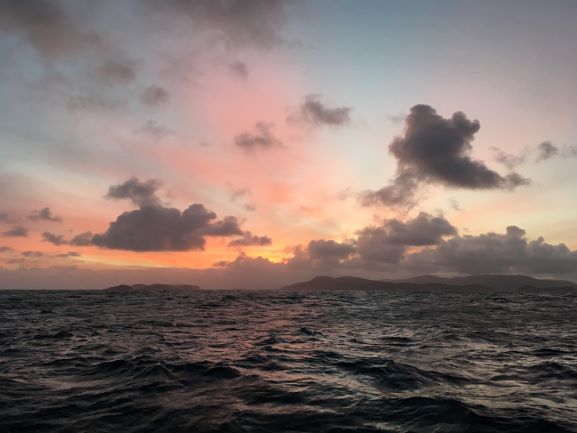