Sunday 9am NZT (Sat 2100 GMT) Sunny day with broken cloud and seas nothing like as bad as overnight, although still a bit rough. Running generator, inverter and watermaker - and using radio at same time. With batteries behaving so much better and accepting a good charge, and Superwind putting in plenty of power when there's good wind, the power situation has changed totally, although I'm still being careful and monitoring the battery state carefully.
Looks as though wind will continue around 15kt from WSW-W during the day but will increase overnight - maybe becoming quite strong, at 30kt or more - so I'm likely to reef down at sunset.
Getting some more sleep - very disturbed last night...

3:30pm Just finished a long session on deck, stowing the pole and dealing with a lot of lines. Full genoa is back out now. The lazyjack lines had both got twisted around high up mast fittings and also took a time to disentangle. Swell is quite noticeable at 2-3 m and quite close.
It's been a very pleasant day of sunshine and just a few clouds, so very relaxing - in contrast to last night. Had a good sleep earlier, so feeling refreshed.
The latest forecasts give "westerly 25 knots everywhere this evening... Monday southwest 25 knots... Gradually easing everywhere Tuesday southwest 20 knots." (for Castlepoint) and " Southwest 20 knots, gradually changing northwest 20 knots after midday. Turning Monday morning southwest 20 knots, rising in the south Tuesday morning southwest 30 knots,becoming everywhere Tuesday afternoon southwest 35 knots with rough sea. Easing everywhere Tuesday evening southwest 25 knots. Southwest swell becoming heavy Tuesday,easing Wednesday." (for Portland)
At present we're still in the N of Castlepoint weather area but not far from entering the S of Portland area. So it looks as though we're expecting W 25kt this evening and overnight, with sea rough at times, becoming SW 20-25kt in the morning and then rising to SW 30-35kt on Tuesday.

4:30pm Sun getting low - sunset is imminent and with just a few cumulus around, it's beginning to be colourful - several pink clouds already.
Feeling lazy today so didn't let out the 2nd reef as I would have, had I been in a race - but I'm not and felt like taking it easy today. Wind can't be more than 15kt just now, if that, and we're making around 4-4.5 kt, heading NE still.
Time for some food - had very little so far today so it's my thick soup followed by pancakes and dried fruit.

Monday 12:30am NZT (Sun 1230GMT) A lovely night! Moon is shining so very brightly, lighting up the seascape and giving a broad path of light on the sea surface towards Nereida. A few clouds - some large cumulus ahead, none overhead and not many stars easily seen, since the moonshine is blotting them out. We're sailing well at ~6.3kt in SW wind of ~20kt, with waves carrying us forward frequently at over 7 or 8 kt briefly. Last night, I was seeing speeds of over 10kt when carried forward on a wave, they were so much bigger and rougher...

We're getting very close to the official Date Line (at 180E/W). Our present longitude is 179 10'E - which puts it just under 40 miles due E of us, but on our present course, will be crossed 73 miles ahead - in roughly 12 hours' time, if 6kt maintained - midday Monday NZT. It will be simpler to stay in NZT for a while but officially, we'll move from being ahead of most people to being a day behind...Friends in B.C., W coast of USA and Mexico (Baja) will be 5hrs ahead, instead of 19 hrs behind. We'll be repeating a day!

Monday 2am NZT (Sun 1400GMT) Just about to get back to my bunk after several long chats on HF radio! On for long enough on 20m to catch up with W.coast US friends during their start of day, as well as Aus stations in Victoria and Queensland about to get to bed just before their midnight and a Perth station during their mid-evening... Back to sleep - we're still sailing pleasantly in WSW wind at 5-6 kt.

6:30am First light before dawn, increasing rapidly. Seas quite rough and close at every 7 seconds - heeling us over... Surfing briefly at over 8kt but generally making around 6.3kt in SW wind just over 20kt, although might be lessening. Just a few clouds in sky - pleasant morning.

Just passed N of 40S - definitely out of Southern Ocean now - but seeing S.Pacific Lows, often breeding in Fiji and heading SE, instead! Hope to get away from those soon. 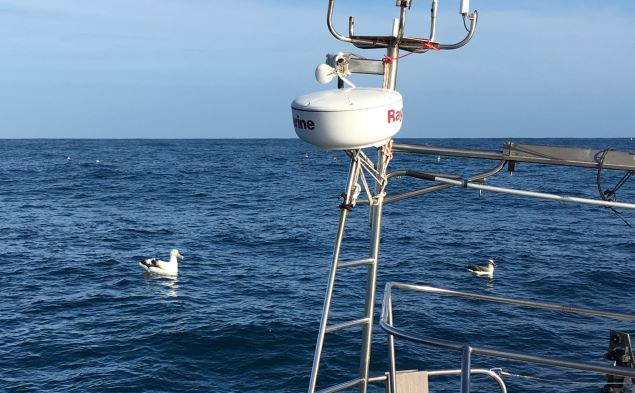 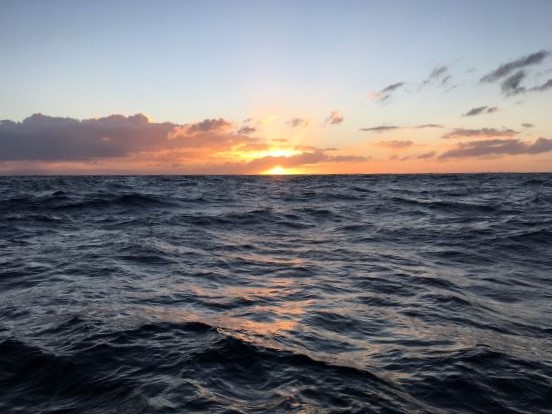