Wednesday 9:15am NZT (Tues 2115GMT) Showery, gusty conditions with plenty of rain clouds around. Wind from S now around 20kt and expected to lessen slowly over the day as High pressure builds.
Seas still close together at 6 seconds and most are just over 3m/10ft high but only the occasional bigger one, nearer to 4m, knocks us about harder. I'm mostly feeling fairly gentle rocking from side to side as we sail along with wind just abaft the beam.
Noticing that dawn is coming earlier as we head E - today, at 7am, it was very light and past sunrise already.
Was nice to chat to cruising friends on SSB/HF radio earlier - on their way to Fiji from New Zealand but pausing for a few days inside Minerva Reef. a very pleasant stop-over on the way.

2pm Showery, cloudy day has given way to bright sunshine and fewer clouds. Pressure has risen to 1020hPa and wind is definitely slowly getting less. Seas are still a bit rough and giving a 'boisterous' ride at times. Full genoa... and soon the 2nd reef will need to be shaken out - having a 'cup of tea' in the meantime! (Actually, a mug of broccoli & cauliflower soup - very tasty.)
With help from Luis Soltero of GMN (via Colin, VK6CI), the missing 'send' and 'save' buttons on the XGate emailing software have been very easily brought back into view and use - excellent! Simple to do when you know how! Thanks to both for their help and special thanks to Luis for the loan of the Aurora terminal and the Iridium airtime given and being made good use of.
Temperature has got up to just over 18C again - we're definitely slowly getting further N into warmer climes... but I'm still waiting to remove several fleeces and looking forward to replacing with shorts and T-shirt...

6:45pm Sun was setting around 4:30pm tonight so it's been dark now for quite a time. The wind is dying, it seems - the sails are flogging a bit at times, from not enough wind to keep them filled as the waves move us around from side to side, and the boom jerks as the mainsail goes slack and then fills a short while later with the wave movement - it's held in place by the preventer... Lots of cloud still around to give gusty conditions at times, to add in to the mix.. Difficult to see where the wind is coming from, although I looked at the windgen and it indicated the direction was no different from earlier - so what I'm noticing is due to the combination of light wind with the wave motion. Our speed has definitely dropped ...

10pm Finally shook out the 2nd reef which could have come out earlier, but with gusty conditions, took my time - speed is up nicely now, in wind just over 15kt. Need daylight to shake out 1st reef - strong sail tie is in too well to release at night.
Lovely moonlit night - was very pleasant working on deck, although took a time winching up the halyard in a good 3m/10ft swell. Will need to keep an eye on wind direction tomorrow - forecast to back slowly to SE by evening, maybe ESE.
To my bunk now - nice to feel Nereida sailing smoothly and well.

11:20pm Well, to my bunk was the plan - but actually spent a good long time first chatting to a lot of US ham radio contacts in Florida, Virginia, Ohio, and many others elsewhere, including a few from Canada and even from the islands of Barbados and Roatan... Good that the batteries are holding charge fine now and the wind generator (Superwind) is doing such a good job helping to put in the amps also. Now... to my bunk... I must get some sleep!

Thursday 5am NZT (Wed 1700GMT) Cloudy sky with moon not getting through much - too few breaks in cloud. Still managing to light up the scene a little, which is not as dark as it would otherwise be. Wind from S still and around 12kt, so we're making just under 5kt - likely to become less over the day coming up...
Speed just went up to over 6kt for a time as wind increased under a cloud giving light shower...Glad didn't shake out 1st reef - heeling plenty as it is, in gust! Pressure quite high at 1020hPa but has levelled out.
A bit more sleep before dawn breaks.... Difficult getting into windward bunk (starboard) when boat heeling to leeward a lot.

Photo was taken by Allan Sutherland, at Primeport Timaru, of Nereida on a mooring buoy in the harbour there, just over a week ago. Thanks for sending, Allan! 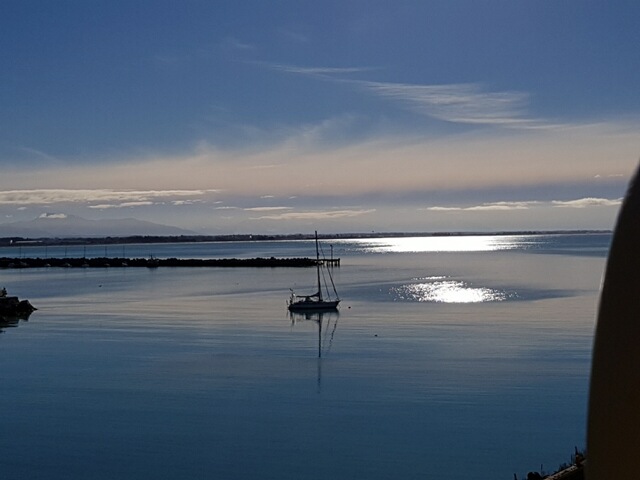