Friday 8:20am NZT (Thurs 2020GMT) Creeping N at around 2kt in light air from ESE and a slight 2m SE swell. A bright sunny day with just a little cloud, mainly ahead, and an albatross gliding not far away...

Coming up to Midwinter solstice down here, so shortest day today - but getting warmer slowly, as we head further N....

Midday Not seeing much benefit having hoisted full main - we didn't seem to have increased speed at all with it raised, with 1st reef shaken out. Took a lot of effort (my electric drill winch 'cranker' has stopped working since the knockdown) but finally got it there - to find we're still only making just over 1kt, headed just E of N. Being close-hauled doesn't help our speed but I want to avoid heading W as much as possible in what is effectively an E wind..
Doubt we'll get over the Date Line today!
Albatross still circling around - looks very much like a Buller's albatross (mollymawk) but couldn't see the bill well enough to be sure (see photos posted two days ago)
All very calm and peaceful. A good time to do things not possible in bigger seas and winds - I was finally able to untangle the starboard lazyjack line from having got itself (again) around the mast deck-light fitting. Also trying get a few other small odd jobs done - including making a beef stew for the next few days' meals.

Time for a quick lunch and then maybe a short sleep is in order... Got to sleep late last night, worrying about the wind direction, and was up early.

2:45pm No sleep - weather next week is increasingly becoming a concern. Downloaded fresh weather files. Quite apart from being trapped in the present High pressure system, with its light air so we're not really getting anywhere, there's a Front coming within a couple of days, likely to be gusting to 30kt or more for a time, so not very pleasant but not too bad. Then there is a deepening Low, with an associated Front, coming after that and likely to cross our path if we continue heading NE as planned- in order to avoid its strongest winds and seas, we'll need to keep up a good speed as much as possible, hoping to get ahead of it to the NE as it passes our position, heading SE. It's expected to develop a lot as it gets closer.

6pm Wind has really died down - there's no steerage so I found it impossible to persuade the boat to come about when the sails were backed. Furled in the genoa and drifted in wind of 5kt or so. No moon yet and cloudy, so very dark night.

8:15pm A little N wind so got underway - sailing due E now with full main and genoa - making just under 2kt. Moon just rising from behind low cloud. Sea fairly calm - just a slight SW swell. Time for some food - had nothing since cereal and scrambled eggs for breakfast...
8:30pm Well... we did start to sail - but then the wind died again and we ended up with sails backed, hove-to.. Takes time to get out of that - when the windgen blades aren't turning, the wind must be well under 7kt. Started off again - hoping to keep creeping forward - the moon is still partly hidden by clouds in the E but will soon be giving a good light. Making around 1kt almost due E on a beam reach.

Saturday 4am NZT (1600GMT Fri) Moon shining quite brightly - a few clouds around but not many. Wind from N now and we're making better speed due E - around 4.5 kt, with full main & genoa. Pitching and banging into waves a bit.

7am WE CROSSED THE DATE LINE A SHORT WHILE AGO - now at 172 27.39'W. Keeping to NZT for time being - very convenient and puts off 'losing' a day & going 'backward in time' for a while. Date Line is very 'wiggly' anyway - there are places to the N of here which also keep to NZT - so I'm in company!
Bright sunshine in between a lot of broken cloud, much of it thin. A real mixed swell giving very lumpy, rough seas - S at 2m and N at 1m. A lot of pounding/banging into the seas - very uncomfortable. Continuing due E under full canvas. Moon still visible, high up. 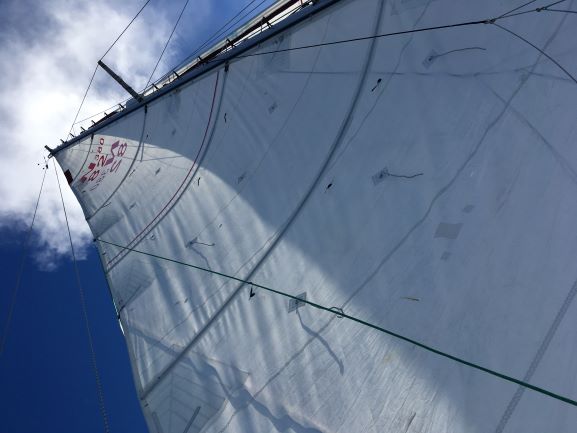 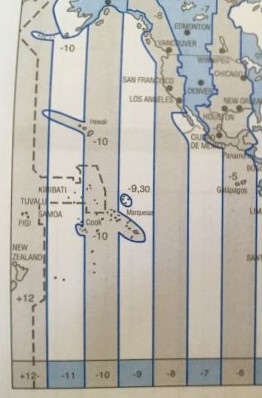 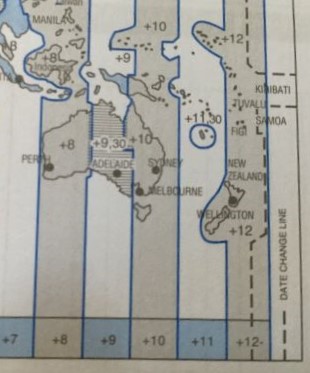