Friday 8am LT (1800 GMT) Took a couple of photos in quick succession, and a video, of the big , impressively rough seas that keep picking us up and throwing us about as they come onto our beam.

3pm Every so often, it has calmed down a bit and I wonder if I should unfurl some more genoa - but then it soon gusts up again to near 30kt and I realise that would be a bad idea.

During a short lull in the wind, I got out some nice snacks to celebrate reaching the Tropics - crab pate on crackers, black Kalamata olives and (Saltspring!) feta cheese. All enjoyed seated safely on the leeward settee/bunk ...while the sky clouded over and it rained after a morning of bright sunshine. It's been rough now for so many days, I've lost count... and seas are set to continue tossing us around at just over 4m for another two days at least, with E-SE wind of 25-30 kt, as well.

The best, safest place to be is on or in my bunk - moving around the heeled, ever-lurching boat in these very big,rough seas is difficult, so kept to a minimum.

We passed Rurutu 15 miles off at mid-morning in bright sun and very big seas that regularly broke over the decks and washed over the hard top. I tried to avoid crossing directly over a seamount that was exactly in our path to the SE of the island because they usually generate rough seas in any bad weather - so maybe the seas were that much bigger around there, despite our detour.

We're now on our way towards Tahiti and Moorea - 2-3 days away.

About to have a short nap before Pacific Seafarers Net check-in at 0310Z (5:10pm LT)

Sunset Soon after dark, just caught a glimpse of the setting crescent moon as it peeked out from behind low cloud in the W.
Was thinking, yet again, about unfurling the genoa some more - but then the wind gusted up, so changed my mind... It's been really gusty today - and not obviously due to clouds passing overhead.

Finally discarded the last fleece tops! Even felt warm enough this evening to switch on a small fan at the chart table to cool down a touch. We're in the Tropics for sure now, with sea temperature well up and nearing 30C/86F - a lot higher than air temperature.

11pm It's just possible that the wind might be lessening. Boat speed has been down a lot this evening, although wind has still been gusting up to near 30kt from time to time. Tempted to unfurl just a small amount more genoa. (Later - wind well up again with rain - glad I didn't!)
Have had a nice celebratory evening - relaxed to music, with a ready-prepared meal plus a tiny amount of red wine and some chocolate afterward. Also enjoyed chatting to quite a few different people on ham radio (Canada, Australia, New Zealand and USA) and cruiser Nets in Fiji and French Polynesia.

Really pleased with the main batteries - not only are they now accepting plenty of charge when I run the diesel generator (which I've not needed to do for three days now) but also, with Superwind wind generator's big input in present strong wind, voltage is regularly over 13V - excellent!

Saturday 5am LT (1500 GMT) Wind is still up around 24kt or more, and we're making 4-5 kt under a dark sky - no moon to light up the scene just now. Bouncing around with occasional wave breaking onto starboard side deck - a lot of noise and a lurch to port...

6:45am Daylight - just before sunrise with quite a lot of cloud around, some of it a thin layer. Seas are impressively big at over 4m - a lot of them at 4-5 seconds interval with a few at 8 seconds interval. Most seem to be coming from E, with some smaller ones from ESE-SE, so making for rough seas, moving us around a lot and still occasionally washing the decks as one catches our beam. Wind is from E - still mainly at well over 20kt, gusting to over 25kt. We're heading just E of N (009T) so rather heading into the seas and apparent wind, which slows us down. Sea temperature has risen to just over 30C/86F and cabin/air temp is 23C.

7:15am Sun has got out from behind low clouds. Seas have frequent large foam patches on their surface from where a crest was tumbling and breaking a little - nothing too threatening. Pressure has been slowly dropping over recent days and has now reached 1018hPa - well down on the high of last week.
Unfurled more genoa - finally! Wind is around 20kt mostly and speed has been nearer 4kt than 5kt - now making 4.5kt. If wind stays down will shake out the third reef but will check latest weather forecast first.
Was pleased to see the main halyard is not caught around a mast step, as I thought yesterday - either I was mistaken or it freed itself. Either way, it's good news and a big relief. 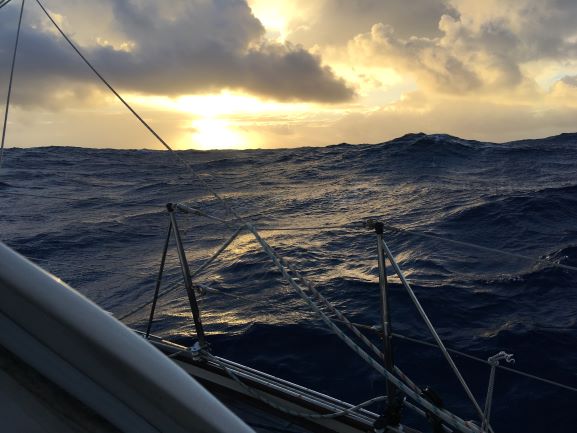 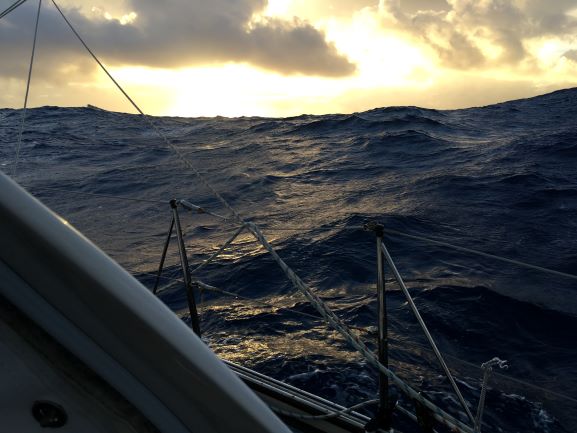