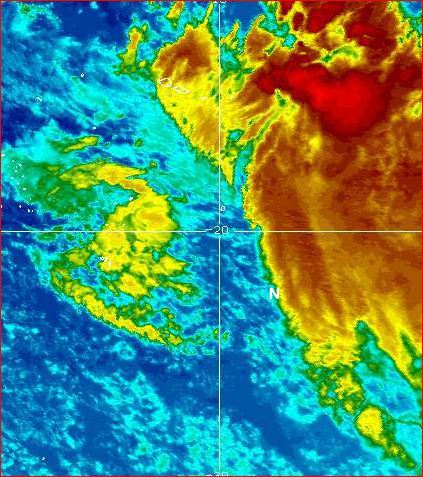 Midnight - Drifting NE in less than 10 kt of SE wind, occasional short gust to 20kt before subsides again... Heavy rain stopped a while ago, pressure has been steady at 1003 hPa since this afternoon - centre of Low is not far away.

This morning, after prolonged heavy rainsqualls to 37kt kept me in cockpit for a long time, having headed quite a distance NW overnight and yesterday, I decided to heave to. I needed to get down below for a radio 'sched' and could do with some rest and breakfast ... and felt maybe it was time to stay put and let the Low pass us by... before we got any further away from Tahiti...

Dave of 'Chameleon' sent me the satellite picture he'd downloaded, showing the clear break in the heavy cloud around the Low yesterday, at 5pm NZT, where we were SW of the Low's centre, under starry skies, heading NW! (See picture above)

Overnight, the cloud and rain came over again and, by morning, the boat was constantly getting a thorough washdown - which continued all day long. Swell increased to 4-5 m and was quite rough at times, making life rather difficult, tossing us around constantly while hove-to.

Over the warm and very humid day, I caught up with all outstanding emails while downloading weatherfaxes, often having to retrieve pen, mouse and other items which had been flung onto the cabin sole as we were moved suddenly by the seas. I made good use of my new arm-rest which doubles as a restraint, preventing me fom falling out of the chart table seat when we heeled suddenly!

I'll get a few hours' sleep and check out the situation again overnight. The Low is being blocked by the High to the S and not moving fast!

DMG from 1pm NZT Saturday to Sunday was 112 n.ml. - we were making good speed until we heaved to this morning at 7.30am!