Monday Midday LT/Tahiti time (Sun 2200 GMT) Seeing big clouds ahead mid-morning, I'd furled in a bit of the genoa in case of strong winds.
As we got closer, I realised there was a major rain shower off to starboard - heavy rain. Thinking to avoid it, I changed course to go well downwind of it - or so I thought. It turned out that the wind then backed a lot under the cloud and we were now simply sailing close to the new wind direction - and the rain very slowly passed ahead of us and off to port - in a W direction... We got very little of it. The wind had increased a lot but, although quite well heeled, we were doing fine - at an excellent speed of 6-7 kt!
We drew away from the cloud amd I went below, thinking we'd got away easily and had finished with the band of rain clouds... Although there was another off to starboard, I thought it would pass astern of us as we headed N.
.... It didn't! I heard heavy rain shortly afterwards and came up to investigate. Wind was increasing rapidly under a big rain cloud and we were heeled so well that the tor-rail (upstand on the seaward side of the decks) was in the water and the stanchions kept splashing in the sea above it... We were making well over 7kt, which was great, but I was feeling very uncomfortable!
I decided I needed to ease the mainsheeet to help stop some of the heeling ... and then, still heeling a lot, went on to take in the 2nd reef in the strong wind... There are times when you just have to get on with what needs to be done! A line got caught and I had to go forward to release it... All ended well and, by the time the rain cloud had almost passed over(!), the reef was in and we were more upright - but still making around 6.5kt.
The good thing about getting wet in the Tropics is that it really doesn't matter!
After that, we truly had finished with that band of rain clouds, although there is still a lot of lighter cloud around. As we moved on away from the clouds, the wind came back to its original ENE direction (veered from its NE-NNE direction under the clouds) and we got back on course.
Now we're making a very pleasant 5-6 kt, close-hauled under sunny but cloudy skies and pounding not too badly into a 2m swell. The second reef will stay in for the time being.

3pm A band of big clouds well ahead - will keep an eye on it as we get closer but probably a few hours away.
Full genoa now, with 2nd reef in main still. Bore away a little more off wind earlier - speed was down (better now) and also, coincidentally, means we can avoid a seamount otherwise on our path. Will take a short nap before we reach those clouds.

4:45pm Happy to find the big clouds around all seem to be light grey or white - no strong rain squalls imminent just now! Having a relaxed sail just now, making around 5.5kt.
Getting my evening meal ready: shrimps with sweetcorn... simple, tasty, quick and easy with no cooking needed. It's warm enough not to need a hot meal.

11pm Bright, full moon lighting up the sky and sea - a lovely night!
Wind a lot less than earlier - only making around 4-4.5kt. Should shake out the 2nd reef but that will have to wait for daylight now, so any squalls ahead can be seen.

Tuesday 7:30am LT/Tahiti time (Tues 1700 GMT) Wind stayed fairly light overnight, with lovely bright moonlight and just a few scattered clouds. Mainly gentle conditions although pounding into occasional bigger wave from ENE. Cabin temperature is 30C/86F so I'm making good use of the small fans dotted around to give a slight breeze where I am.
Decided to wait until after breakfast (pancakes!) before possibly shaking out the second reef since the likelihood of rain squalls developing over the day is quite high and we're making a fair speed just now - around 5kt. Speed was improved by falling off the wind a little - maybe the wind had backed slightly, resulting in being too close to it before.

We're 600 miles due W now of Hiva Oa, in the Marquesas, and passed within 50 miles E of the 6 mile long atoll of Karoraina, part of the Kiribati group of islands, soon after midnight. I hear it is uninhabited and a wild life refuge, full of seabirds. There are only a few very small islands on its coral reef and its maximum height is only 25m above sea level. 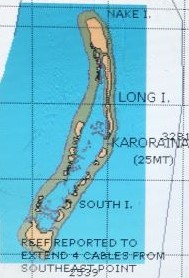