Wednesday 11am LT is Tahiti time (same as Hawaii time) (Wed 2100 GMT) Gusty with so many big clouds around - good wind at times but slow at other times - highly changeable.
Went to release reef but then saw we were heading towards a grey cloud. Wind often dies ahead of a cloud, before coming up strongly when it gets closer, so paused to see what would happen... Really just creeping along - wind has gone...

Ran the small diesel generator earlier and the water maker. Topped up a lot of emptied water bottles - drinking lots in the warmth - cabin getting up to 32C/90F. Running a small fan wherever I am in the cabin - they give a nice cooling breeze but take very little power.
Slowly drying out a lot of clothing and some bedding, although with so much salt in them, they never really feel dry - need a good fresh-water wash. Some have gone mouldy & might have to be replaced on landfall.

12:40pm Just keeping ahead of a large grey rain cloud - rain falling not far off our stern. Making 5.5-6kt in a good wind of 15kt or more - but from ENE, so having to head well W of our preferred course.

2:50pm: Wind died again, once we were clear of that rain and cloud. We were making only a NNW course in its backed wind, at very low speed.
Decided it was time to make up for some of last night's lost sleep while the wind settled down away from the cloud.
Woke up to find a veered E-ESE wind, so eased the mainsheet and took up on the preventer. So little wind still that the blades of the Superwind (generator) are not turning - shows there's under 7kt of wind... Creeping along again, although on a better course. No record-breaking big DMG today... and this will mean postponing my hoped-for Equator-crossing party from Sunday/Monday to Tuesday or later...
Time to prepare a simple meal while good daylight - fried potatoes with scrambled egg (dried) and some green beans. Also soaking some dried beans ready for cooking later, for tomorrow's meals.

4:45pm Wind has just filled in a bit from E - windgen is turning, although not very fast, so wind must be close to 10kt. We're making around 4kt now - a lot better than earlier! Some cloud showing ahead but well in the distance - hopefully, no squalls... will need to keep an eye out.
Sun is beginning to get low - dealing with food now, while still plenty of daylight.

6:30pm Finished my meal. Looks as though we're in luck - we're passing under the band of cloud across our NNE path - and found a bit of a gap in the heavier, rainy cloud - so looking good to pass through with no squalls or strong wind. Light has almost gone now but there's enough, despite no moon seen, to see what is ahead - fingers crossed for overnight!
Wind still pleasant at around 10kt from E and seems to be increasing - we're making over 4kt, often getting up nearer to 5kt. Bouncing around in the 2m swell from E.

10:30pm Beautiful moonlit night.
So much for wind increasing - it has, if anything, decreased.... so we're now struggling to make way at 1-2kt and being taken well N of our planned course.
Sleep is very welcome.

Thursday 3am LT/Tahiti time (Thurs 1300 GMT) Moon shining brightly through slightly broken, thin overcast . Genoa started luffing up and, as I tried to adjust course and sail trim in a wind shift, we ended up going around in a circle twice - wind had dropped to below 10kt and backed to ENE-NE so having to head on 350T, resulting in a COG of 344T, at only 1-2kt. .... Rain!! Not a lot but explains why the wind suddenly backed so much to give a problem.... 'cloud effect' working to throw us well off course for the time being..

3:45am Now out from under the raincloud, so maybe we can get back on track - big cloud has passed off to port, headed W. we're going very slowly still, in wind under 10kt - only making around 2.3kt, with COG of 353T, despite boat's bow pointing 000T now.
Back to my bunk for more sleep.. Sky is clear off to starboard and moon is trying to get out from edge of cloud and shining more brightly again...
Proving very difficult to make any more Easting ... and difficult to hold what Easting we have, even. Maybe the wind will veer more towards E or ESE soon, so we can get back to a course of NNE? This is when use of wind-steering is excellent - I'm missing poor old Fred!

5:45am Day breaking - hint of orange light in clouds to E - sunrise not far away... Lots of grey cloud everywhere with one or two small showers seen. Long straight line of rain cloud edge among the clouds seen astern almost from one horizon to the other, with rain falling from it in different places.
Making 1.5kt in wind of about 4-5kt, maybe less... was about to get to to my bunk when genoa luffed up and we went circling around in the light wind from just E of NE... Now back on a heading of 000T but only making a course (COG) of 353T at 2.4kt...

7:15am Suddenly we accelerated to 6kt under edge of light raincloud, mainly off to starboard, on 353T. Didn't last long, but good to see some decent speed for a time!
Lasted no more than 15 minutes. Oh well... back to 2.7-3.2 kt in bright sunshine - we didn't even get any drops of rain!

7:20am Wind has veered a lot - to E - so we're now able to make course (COG) of 014T, although speed only around 2.5kt in about 4-5kt of wind which is likely to die further... Rather faint rainbow showing astern, with grey of raincloud as a backdrop.

8:50am Another big raincloud ahead to starboard - giving good wind so we're up to over 5kt now - have to keep adjusting our course - presently trying to avoid passing through heaviest of rain in centre of cloud... Nice to have some speed but would prefer to avoid the strongest winds likely! Looks as though today will give plenty of cloud and maybe some rain at times - so hoping for better average speed than yesterday if enough clouds around. 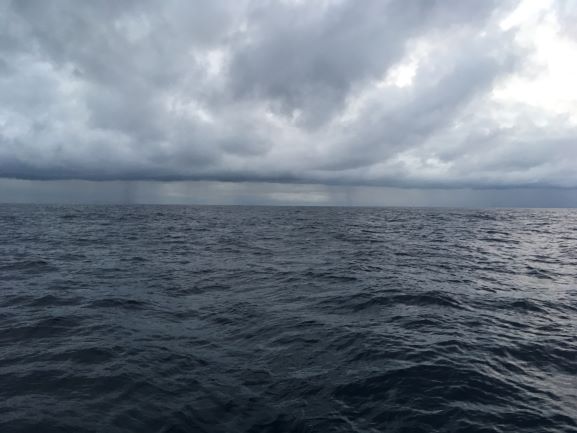 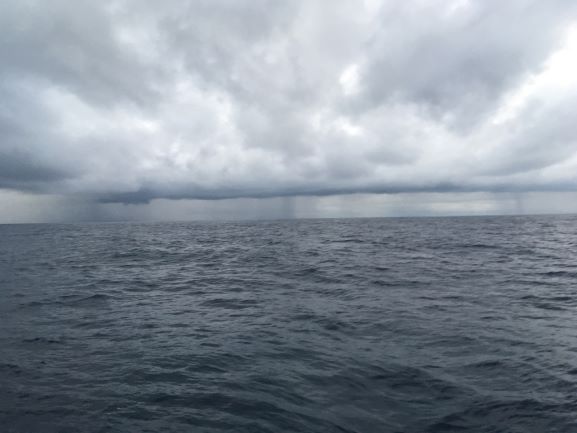 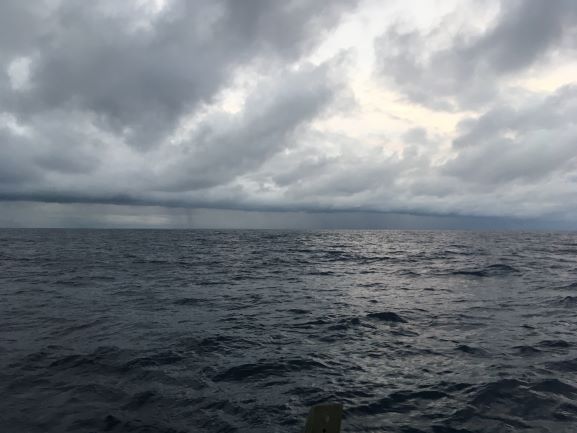 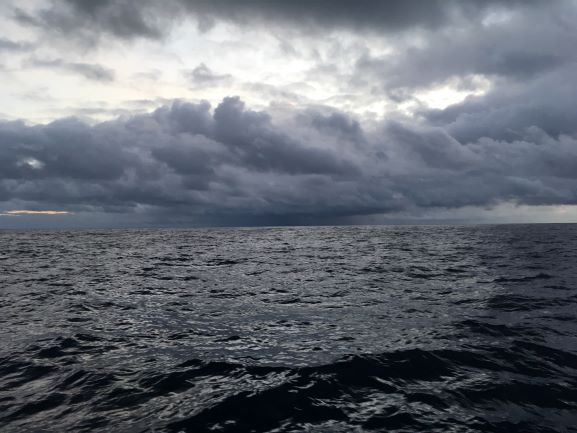