Equator crossing by this time tomorrow, hopefully! Party time! Join me in raising a glass to Neptune/Poseidon for safe passage onward in the Northern hemisphere.

Sunday 10am Tahiti/Hawaii time (Sun 2000 GMT) Another raincloud just passed ahead - now downwind to port ... Furled in some genoa as we got closer to the cloud and mainsail was still slightly de-powered from previous cloud encounter to avoid reefing - wind wasn't too strong this time, so that all worked fine. Will look ahead to see how cloudy-looking it is to decide whether tying back in the first reef would be a good idea.
Several small shoals of tiny blue-grey flying fish took off as we came by - skimming the waves with 'wings'/fins outstretched at complete right angles to their bodies - so funny to see them!

10:45am Finished tying first reef back in - a very large area of rainclouds hereabouts - unfurled genoa to give more speed. Of course, shortly after tying in the first reef again, the wind died and backed a bit more - so we're now crawling along at only 3.5kt at best and onto a course W of N again - on a close reach still.

Still downloading weatherfaxes from Honolulu - need to remind myself of their content to see which ones to download on a daily basis. Very useful for seeing where the ITCZ is now and where it's forecast to be, as well as getting weather info for now and over next few days.

12:30pm In no wind, drifting at 1.5kt SSW - wind had backed a lot in heavy rain just before, under big cloud, so suddenly the sails were backed... and we're now hove-to, waiting for some wind to come back so that we can get underway again. Totally cloudy, rainy, squally conditions so far today!

1:30pm Just back down after a rough, stormy session on deck... Wind came back - with a vengeance! Easily got up to over 25kt in no time... Started furling in some genoa and was very glad to have first reef tied in. But with such strong wind, soon had to ease the mainsheet a lot because we were far too heeled over - made working on deck very difficult but soon after managing that, tied in second reef and furled in more genoa. Seas got up quickly in the strong wind and are still pretty rough just now.

2pm Seas well up even though wind has eased a lot, so our speed has dropped a lot as well.
Just realised that, as well as having had no breakfast, I haven't posted yesterday's reports, having been so busy with different things so far today - will post it now!

2:40pm Enjoying a bowl of thick bean and ham soup - skipped breakfast. Speed is well down now - wind has died again and we were only making just over 2kt in 7-10kt of E wind, so unfurled some genoa which increased our speed to 3kt - must release some more... Just noticed a fresh tear close to the leech between the 2nd and 3rd reef points and a couple of small tears elsewhere.
Having quite a good upper body work-out on the winches today...

4:20pm Another squall came by earlier - just back down below now, after taking in some more genoa just after the sun had set, while still enough daylight to see by. Best to be on the safe side overnight, although sky seems to be clearing so maybe we've seen the last of the squally weather - seas are still rough though - close and steep-to. With a touch less canvas, things seemed to calm down a bit.
3-5 Frigate birds came by, looking as though they fancied perching at the mast top around sunset - something they like to do... Two of the birds were slightly smaller - boobies, perhaps? We're not far from the Kiribati group of islands to WNW - presume that's where they came from.

9pm A solitary fishing vessel came S towards us - but changed course to ESE when about 15ml off to our NNE - I wondered if it did so because they saw our AIS signal and realised we would otherwise be getting close?
Looks as though no worries tonight - all fishing vessels are well clear just now.

Monday 5am Tahiti/Hawaii time (Mon 1500 GMT) "Boisterous sailing" overnight in strong wind. A few big scattered clouds... starry sky overhead. Suddenly, the moon came out from behind a cloud high up - it was as though a flashlight had suddenly been turned on, lighting up the rough seas - we're pitching and tossing a lot.

8am A big raincloud off to starboard, upwind - some rain, some increased wind, but nothing major to deal with - excellent! Plenty of sunshine and not many other clouds around, although a band of cloud ahead, far in the distance.
Found a big flying fish in the cockpit - a fresh fish meal today! Scaling them takes no time at all - their scales are so large, there aren't that many.
Wind seems to be from due E, possibly just S of E, so we're able to make a better course now - not far from the NNE I've been wanting for several days.
Seas still pretty rough with 2.5m swell and a good wind chop on top. 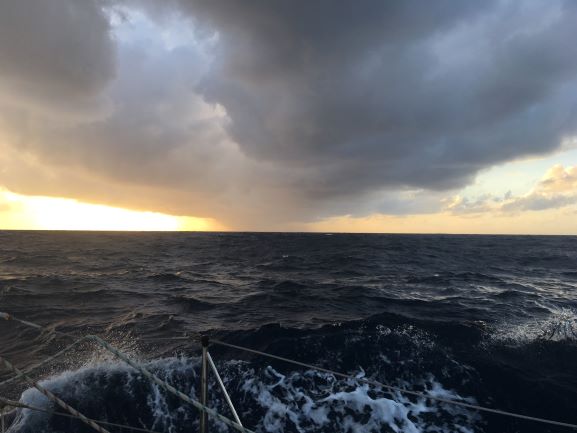 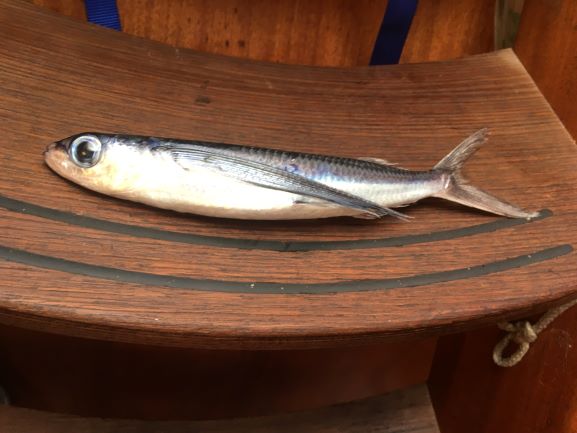