Friday Midday Tahiti/Hawaii time (Fri 2200GMT) Quite a lot of cloud - but mainly scattered light clouds, no big grey rainclouds seen.
Running generator and watermaker. Had a small worry when I saw no water was coming through to the tank - but then, thinking maybe some air had got into the system since last run a few days ago, I ran it for a few minutes un-pressurized and then pressurized it again - problem solved - to my relief! I've been keeping every bottle I can find, small or big, filled with water all the time, just in case...

Still making an excellent speed ... 6.5-7kt. On checking the latest weather info, it looks as though the small Low coming W soon should stay behind us, if we can keep up a good speed, and the Tropical Depression coming next week is also likely not to pose a problem so long as, again, I can keep us going at 5.5-6 kt on average - in that case, we'd be through the Island chain by the time it reaches the Big Island.
We're likely to see some light winds over the next 1-2 days but, fingers crossed, the ITCZ might prove fairly benign, for a change - I live in hope!
Time for a midday siesta...

Forecast from Honolulu: ITCZ FROM 08N154W TO 06N170W. ISOLATED MODERATE TSTMS WITHIN 90 NM OF ITCZ.
Great! Means that here, around 146W, there is NO ITCZ to worry about. We're E of 154W and the region noted... Good news! We're nearly at 7N now, expect to pass 8N overnight and 9N by this time tomorrow.... so likely not to suffer from any major 'convection' in passing through this region where normally the ITCZ is present.
Satpic being downloaded now is showing the cloud cover I'm seeing but mostly just to W of here. Humidity is around 70% and cabin temperature around 32C/90F so a bit warm and muggy...
Grabbing my hairbrush and going on deck, into the cooling breeze - need to keep my hair under control and untangled!

5:30pm Very quiet, peaceful downwind sailing. Wind has dropped and I'm debating letting out a reef - but night is coming on very soon, so unless our speed drops a lot more, I'm inclined to leave the reef in overnight.

Very grey sky, mostly covered in light rainclouds - had a short, very light shower an hour ago.
Enjoyed a mug of broccoli and cauliflower soup before my meal of salmon just now - but had to leave it quite a while to cool down - it's too warm to be drinking hot soup!
A pair of red-footed boobies seen earlier and another bird, possibly a shearwater... dark upper, light below with black breast or chin (just below its head) and thin wings, flying close to the water.

8:15pm Feeling really frustrated just now - speed dropped, so shook out the second reef I'd been thinking about and our speed went up for a short while - but now wind has dropped a lot more and we're struggling to make 3.5kt.
Cloud has almost completely cleared away to leave a beautiful starry sky - but the wind left with the cloud...
Outlook is for more of the same, it seems. So my hopes of keeping ahead of the oncoming weather systems might be dashed - meaning another delay to my finish if we need to avoid the systems rather than sailing fast enough to keep ahead of them. The second system is looking to develop in a particularly nasty way..

Saturday 4:25am Tahiti/Hawaii time (Sat 1425 GMT) Woken by heavy rain in the darkness. Not too much wind and not heeled over too badly - glad of my clear screen that kept the open companionway hatch area fairly dry, despite the middle zip being partly open. Hope the rain rinsed off the boat - everything had become sticky with a salty film.

We put on some speed under the raincloud but speed was later back down to around 5kt and likely to decrease.

5:45am Soon after the rain came sunrise, just around 5am - I was able to see the dramatic dark grey rainclouds towering up very clearly - always makes for a good photo-opportunity! A pink cloud high up to port, towards the W, was a pretty sight as was the silver crescent moon high overhead.
Changed course in fair wind from E, now. Getting concerned about the Low coming along soon and the probable Tropical depression following it next week. If we can't keep up a good enough speed to keep ahead of them, I'll have to take avoiding action...

8:45am Downloading satpic of cloud cover and weatherfaxes giving isobaric charts for up to 72hr/3days of forecasts. They add usefully to the GFS gribs I'm already getting for weather info.
Looking at problem Low and TD - seems that anything over 5kt would be fine to stay out of their way, but the faster, the better! All relies on the weather model predicting the track of the first Low and the following Tropical Depression accurately... Holding our present NNW course looks the best - means heading E of the Big Island, not S of it, as originally hoped... The TD is shown to be heading to the Big Island of Hawaii by next Saturday/Sunday and intensifying as it gets closer ... Will keep a careful watch in case change of plan is needed.
Making 5.5kt now and rolling a bit as we sail NNW downwind.

Link to the Adelaide ABC interview about my Equator crossing is:
https://www.dropbox.com/l/scl/AABxD90n-HB3iQfK-iF5EdSDK2zXs4iF3DU 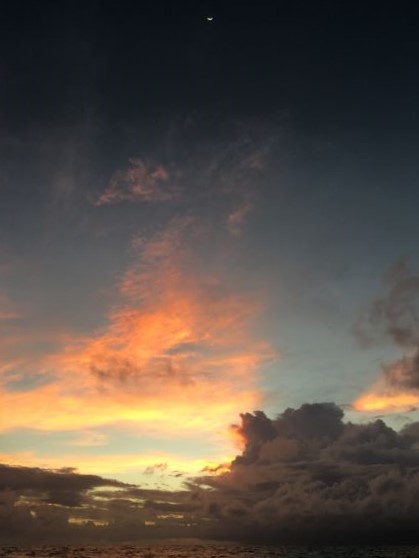 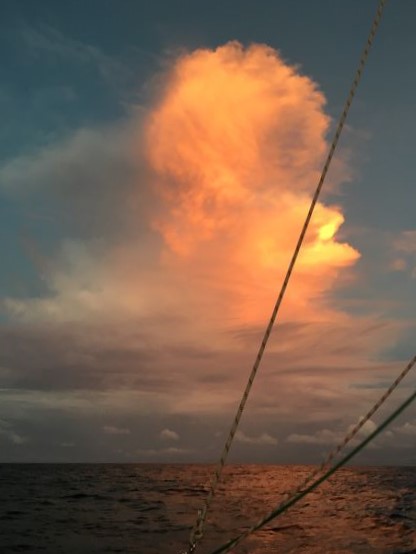 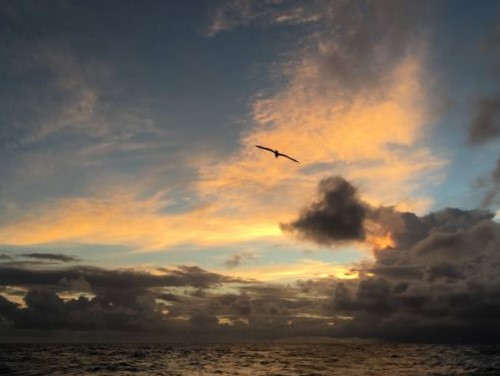 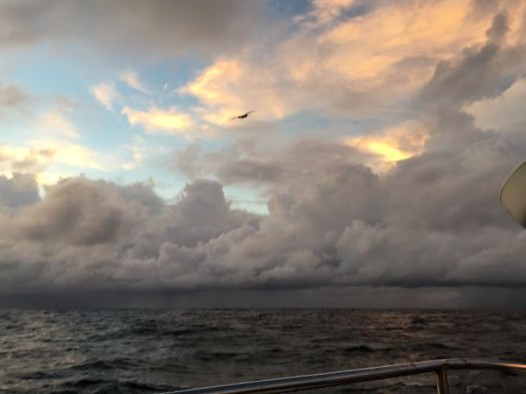 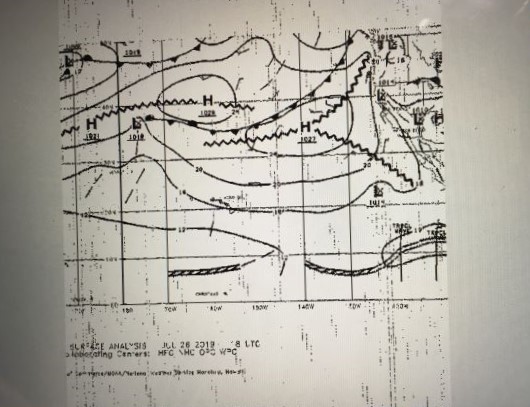