Thurs 5pm Had a good sleep this afternoon - seem to have needed to make up on my disturbed night's sleep over the last few days.
Quite cloudy conditions just now - mostly grey clouds but not so much heavy rain today. Several patches of clear blue sky and bright sunshine earlier - giving good solar power input for a time. Too much swell running to try to deal with the solar panel problem above the aft deck.

Having to get used to judging wind direction from ripples on the sea surface once again, using the ship's compass - as I had to on my last nonstop sail around the world - and for the same reason - no displayed wind info on the instruments. A real bummer, since it's so useful to have that info instantly available.

Wind is from W of S so we're having to make a course to the SE - I would have preferred due S but that's clearly impossible with no engine allowed!

Dramatic scene at sunset - rain cloud not so far away soon after we'd come around. To avoid heading nearly due E, we tacked around to head more SW, as the wind backed into the S, and then SSE, from SW. We're very close-hauled, and banging into quite short swell, which cuts down our speed, but the mainly southerly wind is preventing us from heading due S as we'd like to.

Fri 11am Things seem to have calmed down quite a bit in the last half hour. Not that we're not still rolling around all over the place... we are - occasionally quite violently. Just that we're no longer crashing/being thrown around all the time, as the boat heels over suddenly with oncoming steep-faced swell close together.

The wind is slowly backing more to the SE from SSE, so our course is also slowly changing more to the S. The overnight rainclouds have all disappeared and we're into an area of bright blue sky - it's getting hot.

Just as I was beginning to think again about trying to fix the solar panel problem, hoping that conditions might calm down some more soon, I was dismayed to see that the light was out on the solar panel regulator display. That meant that now there was no input from either of the solar panels... Went and checked the fuses in the aft cabin - both were still fine.

Very bad news since we've got bright Tropical sunlight and we should be piling in the electrons to the batteries just now!! Earlier in the day, we were putting in a small amount, as expected - I keep an eye constantly on input and state of the batteries. So the second panel has clearly just gone down and I suspect for the same reason - its butt connector near the panels above the aft deck was also looking quite green inside when I checked on them the other day and I was inclined to think I should replace both connectors rather than just the one. Now my suspicions are, I think, confirmed.

It's too rolly still to try to get to them and change out the connectors. Gives me time to decide whether to replace with butt connectors again - but with plenty of extra waterproof 'gunge' protecting them and heat shrink around that - or maybe use another type of connector, again with lots of waterproofing needed to prevent the same problem recurring. I might try the other (screw-type) connector initially anyway just to confirm the problem is due to what I'm thinking - it gives a quick'n'easy test.

Fortunately, because we've been sailing upwind all night, and still doing so, the Superwind has been going well in the apparent wind and has been charging the batteries anyway - I'm seeing up to 14A going in and the battery voltage is nicely up.

So my joblist presently reads:
1)solar panels - no input from either
2)wind display - nada
3)staysail foot shackle and furler - need attaching/re-fixing.
4)reefing reinforcement tie-in (must relieve load on reefing lines when in use)

As someone commented to me yesterday, when chatting on the HF radio, "No room for boredom!"

1200 PDT (=1900GMT) - end of Day30. We made only 66 n.ml.(DMG) over the 24 hr period since yesterday's noon position. If we hadn't tacked around overnight, we would have made almost 100 miles DMG... but that's measuring along our actual path sailed to the point where we tacked around, not the straight-line distance between our two noon positions.

With the change of clocks happening over this weekend in N. America, my 24hr DMG measuring will have to relate to 1900GMT (=1100 PST) to stay constant. The ship's clock will adjust to PST (Pacific Standard Time) as my 'local' time. The longitude where we are at the moment puts us still in the 'Pacific' Time Zone for N.America and we'll stay in that for quite a time since I plan to head due S from here for quite a distance - winds permitting! 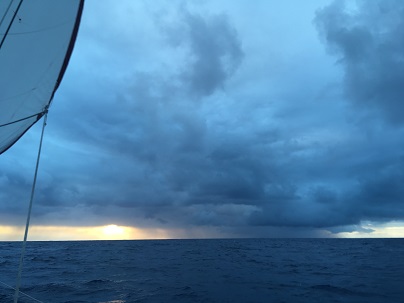