Wednesday 10:30am Tahiti/Hawaii time (Wed 2030 GMT) Bright, sunny and warm already... No wind (windgen blades not turning), drifting WNW while hove-to - just went around in a circle with slight swell knocking us around. Very peaceful, rocking quite often, sometimes a lot more. TC Erick due to pass N of us this afternoon, several hundred miles away - a good distance.
Downloading latest batch of weatherfaxes and checking latest gribs - usual breakfast time occupation.

Once Erick has passed, there'll be a short time with some S winds, and then possibly some E wind or perhaps nothing for a few days until Flossie passes by, also N of our position but not until after the weekend.

It's already a difficult time, waiting & drifting for so long when I should be well on my way N to finishing, so I'm going to have to get on with some useful projects so as not to feel this long time waiting around has been totally wasted.... Galley clear-up and more on mainsail repair are today's projects!

11am Drifting NW, with bow pointing NNW. Occurred to me that I'd best get on with sail repair now, in case Erick passing by to our N later brings rainclouds.

2pm S wind kicked in enough, just after midday, to get sailing - not very fast, since wind was only 10kt or less - often not enough (under 7kt) to get wind generator blades rotating but at least we're moving in the right direction, still a week away. Quite possible that the wind won't last very long . The boom preventer is essential - swell is now a pronounced 2.5-3m from NNE so, without the preventer, the boom would often be swinging around wildly.
I'd just finished with what was urgently needed on the sail repair when I felt increased wind and realised we could get underway again. I delayed shaking out the 2nd reef until I'd patched up quite a good-sized tear that was just within reach from the cockpit.

2:30pm Time for a siesta while another load of weatherfaxes and satpics download - feeling quite tired - probably because raising mainsail is hard work without the electric drill 'cranker' available to help with the winching.

Decided to celebrate being underway (never mind the speed!) by having a 'sundowner' while enjoying the lovely pink clouds at sunset - in company with a pair petrels...! (Had the last few roasted cashews with my drink - but have lots of almonds left!)
About to make a meal of diced ham plus chick peas and chopped tomatoes with additional tomato purée - trying to ring the changes on the food side, as certain items are finished...

9pm Sitting out in the cool night air in the cockpit, enjoying my late meal of ham, chick peas and tomatoes which is proving tasty and was very easy to prepare.
Watching for meteorites as I eat. Spotted my favourite constellation - the Dolphin (Delphinus) high above, not far from Cygnus, the Swan.
Wind still well down - no windgen motion - so creeping along at about 3kt NW.

Thursday 4:30am Tahiti/Hawaii time (Thurs 1400GMT) FIRST OF AUGUST _ unbelievable that we're still on passage with another four weeks or so (hoping for less, but doubtful) to our finish...!!!!
Gybed onto starboard tack in light rainshower and in darkness. Wind from SE now and died down a lot after the rain so now making just 4kt instead of earlier 6kt I'd noticed as I went up on deck to organise the gybe in the rain..

5:30am Dawn breaking and wind dying more... down to 3.5kt SOG now. Grey rainclouds off astern and to starboard - dramatic line of them, as they rise high up, with pink streaks of higher cloud behind them, lit up by rising sun - as yet unseen.
There are two good-sized swells running, both around 2.5m or more - one from N (from TC Erick), the other from SE (wind direction) - making for lumpy seas, but they're well-spaced so not causing too much rolling around.

6am Dolphins! I've been on deck for quite a time, enjoying the changing cloudscape and colours with sunrise. Suddenly realised we had company - a group of dolphins - small, very dark grey with very recurved, small dorsal fin, were swimming alongside and around the bow, often in twos and threes. Quite small and rarely jumping - only saw two leaping out of the water in half an hour of watching them.
The sun was finally completely above the horizon at 5:50am and shone brightly from under the long line of grey rainclouds - now thinning and no longer looking so showery .
While it's cooler, think I'll make some pancakes for an early breakfast...

7:40am Adjusted course slightly to come off the wind a tad more - very downwind but we can just make it... Don't want to head too much towards the Big Island of Hawaii since TC Flossie is due to hit there on Monday so I don't want us to get too close to her track.
Pancakes were good - have learned not to use too much Nutella - very sweet, although nice and chocolate-y. Raspberry sauce from Hobart is far less sweet and makes a good, fruity complement.
Will make some coffee while on first of today's projects - galley clear-up - after posting this, then on to poling out the genoa at some point, if not too rolly, and then on to wading through a backlog of emails - some outstanding from several days now...

Far North (Queensland) ABC (Cairns) interview went out on air yesterday morning and link will be posted once available. 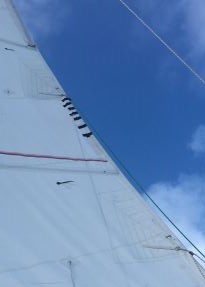 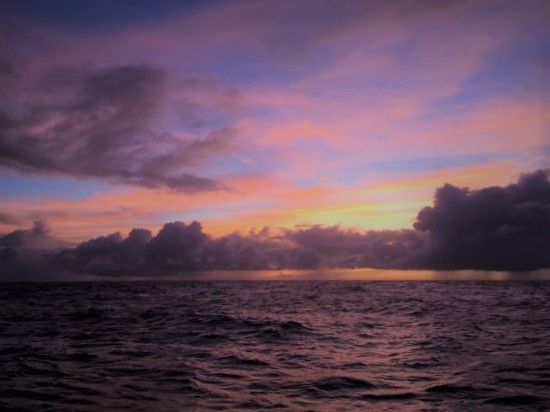 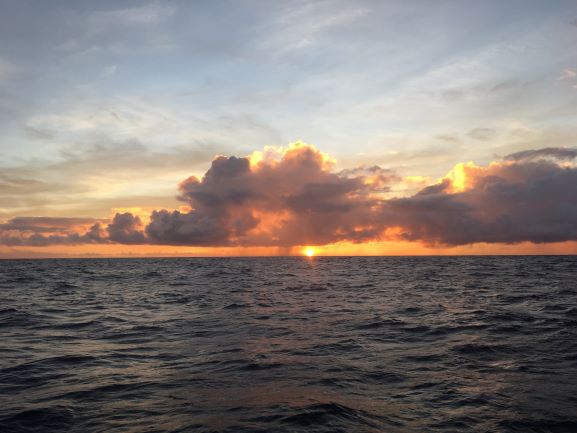 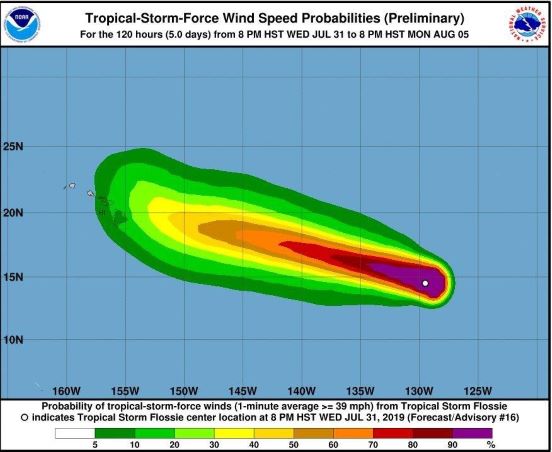