Sunday 10:30am Tahiti/Hawaii time (Sun 2030GMT) Creeping along at around 1kt in very little wind - only just about holding our course with difficulty.
Just downloaded latest weatherfaxes and satellite photos - TS Flossie is weakening and in two days' time will be a 'normal' non-threatening Low pressure system to N of Hawaiian Island chain with remnants of TD Erick and Gil not appearing anywhere.
The two cyclones have caused me another long delay on my circumnavigation - instead of being nearly halfway to Cape Flattery now, we're only about to start from E of Hawaii Big Island in two days' time.
The weather ahead is looking most unusual with the normal N.E. Pacific High pressure system being chopped in two by a big Low becoming a trough over the next 1-2 weeks - so getting N under sail alone, without the use of the motor, will not be as simple as it usually is... I'm still feeling optimistic and hoping to be back before the end of August - fingers tightly crossed that happens... It's going to be close.

Today's major project, while conditions are fairly calm, is to try to finish dealing with emails - thought I was well on my way to finishing but now see I've still plenty to deal with... Also saving the many photos and videos I've been taking - wouldn't want to lose those! Space is getting limited, so need to upload/save them to a hard drive to make space on the memory card.

1pm "Beep, beep, beep,...." - the AP control was insistent. "Off course"... We were hove-to in very little wind, drifting WSW... The wind had shifted and we were drifting downwind. I took the helm and guided us around in a gybe and got us on course, close to the wind - our SOG was SSE - not good! Steered us around again, gybing, until we were hove-to again - drifting WSW at just under 2kt with bow pointing WNW in 7kt wind.
Decided to take genoa over to port side, putting us on starboard tack, to see what course we could make.... With bow pointing 325T, we're now making 290T - better, heading N - good - although also heading W - not so good... but only at around 2kt. Wind is forecast to stay well down but expected to veer to ENE later today and ESE by midnight, becoming a good E wind by this time tomorrow - when Flossie's remnant Low should be well off to the NW, over the island chain. So our COG should improve with time today, becoming more N, even NNE tonight.

2:10pm Difficult to maintain a course - sails get so easily backed in the light wind as the 2m swell knocks us about and we end up hove-to again... Around we go... We're presently makng 280T on starboard tack at ~ 2.5kt. If we end up heaving to again, I'll just let us drift until the wind comes up more and we can make way sensibly again.
Time for another weatherfax and satpic... and some food.

2:45pm Just finished another ham radio session on the Hawaiian Afternoon Net - I had excellent copy on everyone and was again made to feel very welcome.

Later took a lovely refreshing deck shower in the hot sun - why does having clean hair make me feel so good?

6:25pm 259T looks like our course - but we're actually turning around slowly in circles as we drift WSW. Makes me feel like an ice-skater! As is the custom, I'd lashed the wheel to windward on finding that we'd gone hove-to, yet again - but the wind was so light, that just made us go around in circles clockwise, even after reducing the genoa.

9:45pm Decided there's absolutely no point in trying to sail until the wind comes up over 8 kt (i.e. windgen blades are turning!) - not happening at moment, although we're now drifting 280T.... Just went on deck to check conditions - lovely fresh night air with stars everywhere, some haze, but no wind. It should slowly start filling and veering towards SE overnight as Flossie passes us by - maybe not strong enough to sail until morning. But from then on, we should be able to sail nicely for quite a few days - maybe all the way to Cape Flattery ...I live in hope!!

Monday 8am Tahiti/Hawaii time (Mon 1800GMT) Happy B.C. Day to all in/from B.C.!
Beautiful sunny day with almost clear sky and a long, smooth, 2m swell from E. Underway at last in good E wind, making 4.5kt, having finished with some pretty important jobs.
Was up at first light at 5:30am and went on deck to stick some reinforcing patches over an area on the mainsail that needed attention. In going to centre the boom, for easier sail access, I noticed that the outhaul shackle pin had come completely undone - luckily, the first reef line shackle was still in place that was also attached to the same shackle and the boom outhaul ring was also held down by a soft shackle for extra security. No wonder the sail shape has been not too good lately!
Sunrise was almost exactly at 6am Hawaii/Tahiti time. The wind was clearly up nicely from the E, although not strong, and the sea-state was gentle.
In dealing with the outhaul problem, I noticed the first reef line was badly chafed by the ring aft of the reef cringle near the boom - so the chafed end had to be cut off and the line re-attached around the boom. (A sail tie held it in place in the meantime)
Once that was done, I wanted to get underway - but decided the starboard genoa sheet really needed to be replaced - I'd noticed it was badly chafed in one place a while ago but we've not needed it since we've been mainly on starboard tack (wind from starboard side) recently, heading N in winds from the E quadrant. Best to replace it now, while that was easy to do, rather than have it suddenly give way under use later on sometime - that could be nasty!
I'd also noticed that the damaged windscreen windows had been leaking rather a lot in heavy seas or rain - so replaced some small lengths of loose Gorilla tape in hope it would be more water tight.
Finally got to the mainsail - and dealt with a few small areas where it was either torn or nearly holed... Just sticky tape reinforcing on the one side of the sail I could get to, but better than nothing.
Feeling happy I caught the outhaul and reef line problems in time, preventing a major issue on releasing the first reef (which I'm about to do now to give better speed) and good to feel secure in knowing the genoa sheet won't give way in use later.
Think today will be a lovely warm, sunny, sailing day... 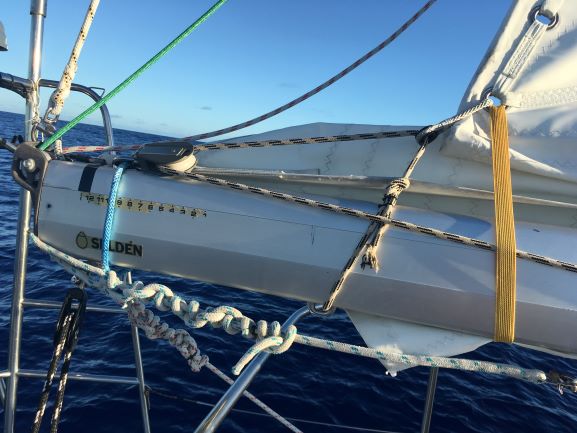 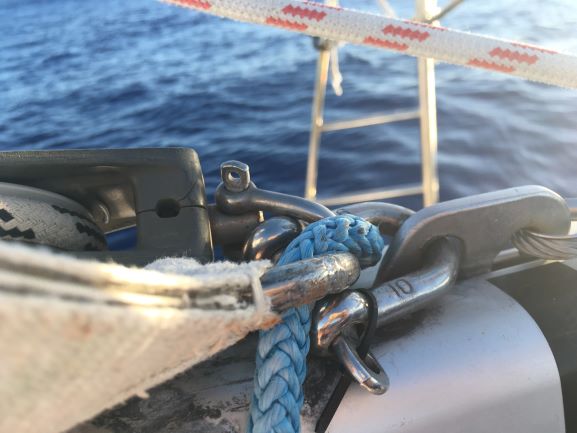 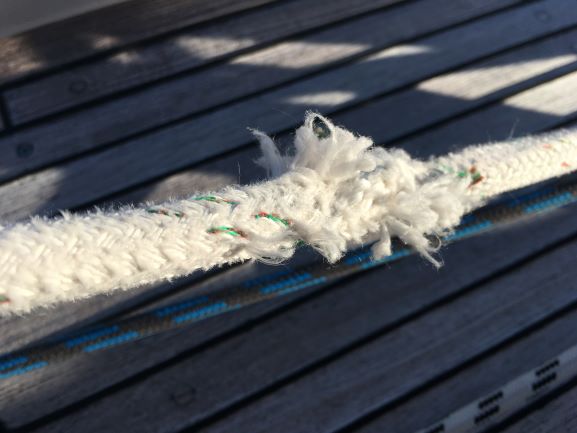 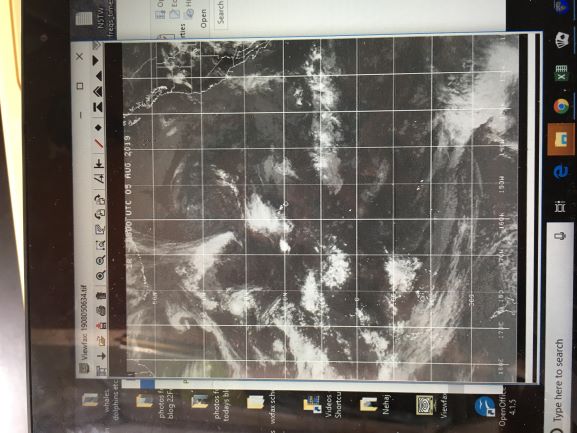