(Note to my Canadian friends - just did an interview with Chek TV News - should be going out today and will be on their website if you miss it.)

Wed Just enjoyed a beef stew with sweetcorn and fresh potato - some over for tomorrow. Had it ready just after sunset but then got involved with deck work - so it had to wait a couple of hours.

Early this afternoon I couldn't find a cloud anywhere - just a vivid blue sky, with lighter wind than usual and gentler seas - I felt obliged to shake out the second reef - no excuses!
The problem later was that I went to shake out the first reef and realised that I needed to work first on re-running the reefing line and I also needed to remove the extra line I'd put in place as a precaution after the first reef line had snapped a few days ago. But there was too much tension in the system - I had to drop the main to the second reef and tie it back in, so as to be able to work on the first reef...

Several hours later, in between adjust?ing Fred several times so as to keep our course roughly due S. I'd finally managed to undo all my knots in the first reef line and extra line, in the 'nettles' on the sail and in the extra line tied in around the mast (easing tension on the sail slide above the first reef luff point).

I'd also sorted out tying in the first reef line correctly and had finally raised the main fully, not long afterwards dropping it again to re-tie in the first reef...! We'd begun to heel a lot under full canvas and having the first reef in helped keep the boat rather more upright, so she sailed better and felt a lot more comfortable and it didn't seem to have reduced our speed noticeably.

I've lost count of the number of trips to the mast I made this afternoon! I'd been hoping that the lighter wind and smaller seas earlier would continue to abate - giving me the chance to work on the staysail - and maybe even have another go at the second solar panel connector - but the wind got up again - presently, it's back at 16kt or more, still from ENE.

Everything I touch on deck has a layer of sticky, sometimes crystalline, salt.

Not too surprisingly, I missed a radio 'sched' set for soon after the Paciic Seafarers' Net this evening - I was busy adjusting Fred again and tidying up the lines on deck... It all takes a time - especially moving about - a good handhold needed before the next step is taken, to avoid lurching across the cabin or cockpit as a wave throws us around..

I'm behind on emails and my logbook has run out of the columns I need for my log entries - I have to rule them myself for all the different data I make a note of in each log entry.

Thurs 8am PST 750 miles due East of the Marquesas - Nuku Hiva, to be exact. Just over 900 ml north of Pitcairn & Henderson Islands - about one week away.
Just finished checking emails/weather and chatting on HF radio - good propagation soon after sunrise but a lot of static on frequency giving a high noise level which increases as the sun rises higher.
Time for breakfast - not too bumpy so will make some coffee. I'll dig out some more fruit juices as well - like to start my day with some juice. We're sailing more gently now - wind is due E at ~15kt and we're making ~6.4kt. A few white clouds around.

Increasing cloud around - one or two typical long, grey ones (photo?) - give them some more time and they'll probably drop a shower or two later...

Enjoying a coffee as I catch up on emails and get ready to post this. 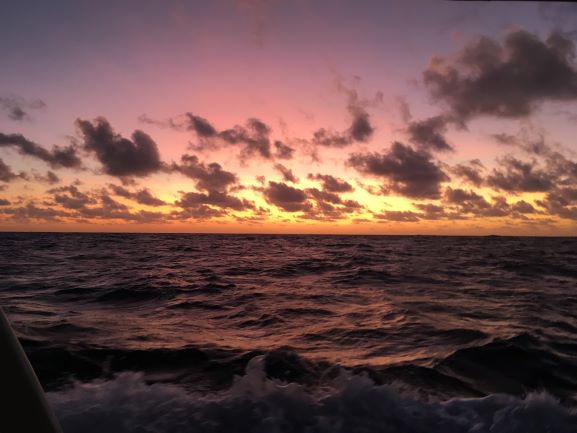