Sunday 6pm Very pleasant sunshine most of the afternoon, but with increasing grey cloud towards the evening, endig up as totally grey skies as darkness was falling. Several useful things done this afternoon, while ambling along at 3-3.5 kt in little wind but pleasant sunshine. For anti-chafe on the lashing at the rod-kicker base, I used a PTFE item I've been storing, waiting for the day it would prove useful - its day came today! It's doing a good job, keeping the lashing off the trysail track as it passes over it on its way around the mast. Cable ties make sure the lashing won't slip off the PTFE.

I also tried to remove or make less proud or sharp the remaining rivets that are still sticking out, using hammer and pliers without much effect. Actually, writing that, it occurred to me that I should be trying to drill out the remaining rivets...much easier and guaranteed a good result. Next time it's calm enough - if not tomorrow then Wednesday. Unfortunately, I can neither replace any rivets nor tap thread in order to use machine screws in place of the rivets. So I'm stuck with the lashings. I did find another useful pair of items which I'm hoping I can use to raise the kicker connection - it's far too low at present and it would be great if I could get it higher.

Monday 11am Been on deck solidly since before 8am, when not below finding items needed on deck... Managed to drill out several remaining rivet parts (not quite as easy as I'd envisaged!) and hammered, then filed down, a couple of more uncooperative ones - all well recessed now. Next, I fixed the kicker foot lashing better.
I also wanted to raise the foot and used the winches on either side of the mast to help do that - made it much easier to raise into position initially than it might otherwise have been, using the two sturdy hooks that I found yesterday to attach to the kicker fitting. Once the kicker had been raised as far as possible (almost back to its original position) I was able to tie Spectra line around the mast winch bases from the same two hooks on the rod-kicker base fitting to secure it in position. I'm pleased I found a way to raise the kicker foot - it was far too low before and was too often resting on the bimini metalwork - using it as a 'gallows' it was never built for. I hope my efforts all work out as intended.

The wind got up for a time this morning - we were making over 6kt at one point while I was working on deck and the seas got up as well - but it's died back down now. Midway through the morning, I gybed around - partly in order to access the mast on the other side of the kicker fitting - but we needed to gybe around anyway so we could head more SE. Now I can get some very late breakfast and think about sailing 'Nereida' properly - as much as this light wind allows - we're heading downwind so have very little apparent wind.

1900 GMT (=1100PST) - end of Day 54. We made 80 n.ml.(DMG) measured in a straight line between the two points, over the 24 hr period since yesterday's 1900 GMT position. A slow day, in light wind, but I was busy working and not paying too much attention - I was pleased to have the calm conditions ... Fred was definitely in charge! 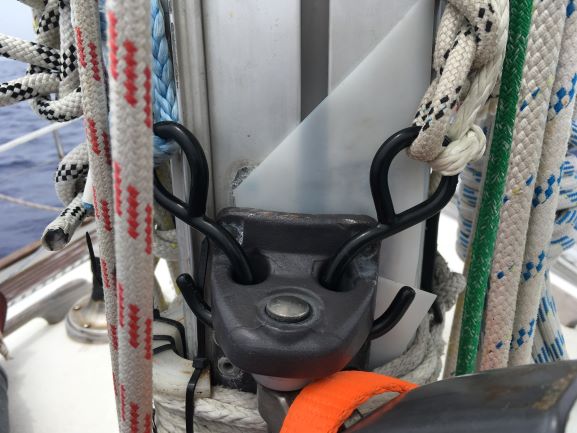 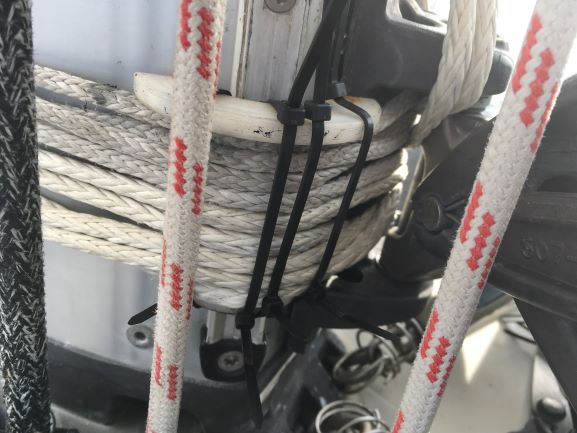 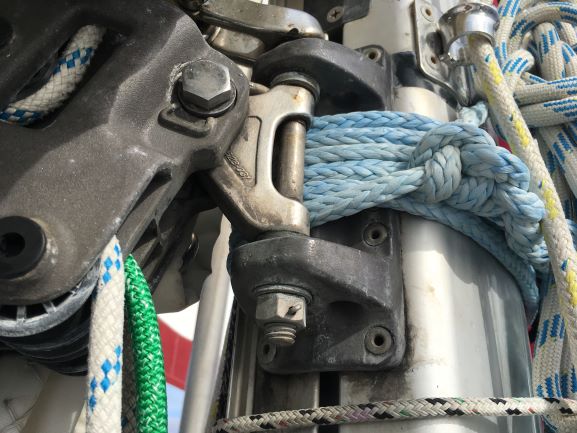